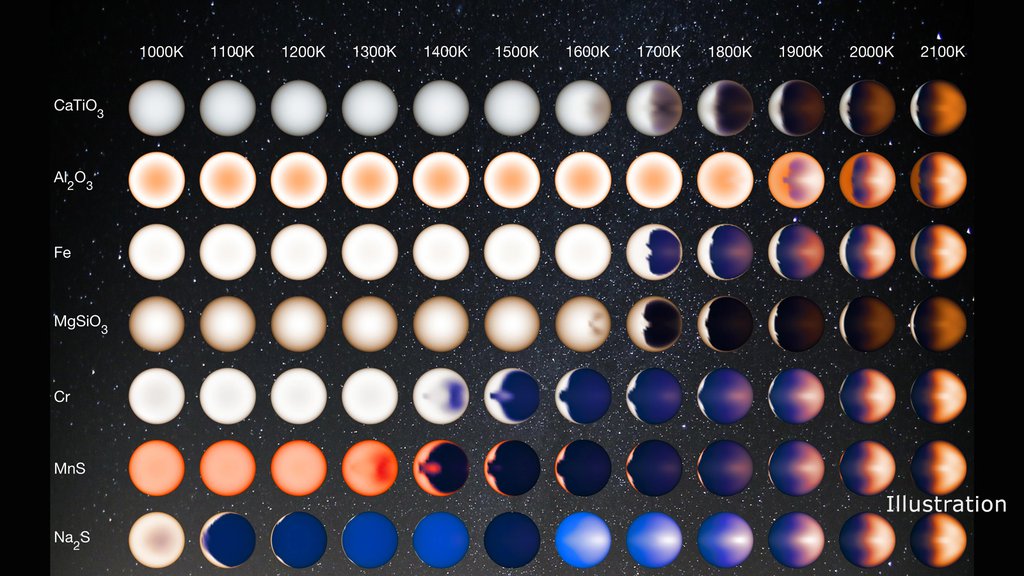 This illustration represents how hot Jupiters of different temperatures and different cloud compositions might appear to a person flying over the dayside of these planets on a spaceship, based on computer modeling.› Full image and caption
Credit: NASA/JPL-Caltech/University of Arizona/V. Parmentier

A new study finds clues to where clouds gather on hot Jupiters, and what they're likely made of.

The weather forecast for faraway, blistering planets called "hot Jupiters" might go something like this: Cloudy nights and sunny days, with a high of 2,400 degrees Fahrenheit (about 1,300 degrees Celsius, or 1,600 Kelvin).

These mysterious worlds are too far away for us to see clouds in their atmospheres. But a recent study using NASA's Kepler space telescope and computer modeling techniques finds clues to where such clouds might gather and what they're likely made of. The study was published in the Astrophysical Journal and is also available on the arXiv.

Hot Jupiters, among the first of the thousands of exoplanets (planets outside our solar system) discovered in our galaxy so far, orbit their stars so tightly that they are perpetually charbroiled. And while that might discourage galactic vacationers, the study represents a significant advance in understanding the structure of alien atmospheres.

Hot Jupiters are tidally locked, meaning one side of the planet always faces its sun and the other is in permanent darkness. In most cases, the "dayside" would be largely cloud-free and the "nightside" heavily clouded, leaving partly cloudy skies for the zone in between, the study shows.

"The cloud formation is very different from what we know in the solar system," said Vivien Parmentier, a NASA Sagan Fellow and postdoctoral researcher at the University of Arizona, Tucson, who was the lead author of the study.

A "year" on such a planet can be only a few Earth days long, the time the planet takes to whip once around its star. On a "cooler" hot Jupiter, temperatures of, say, 2,400 degrees Fahrenheit might prevail.

But the extreme conditions on hot Jupiters worked to the scientists' advantage.

"The day-night radiation contrast is, in fact, easy to model," Parmentier said. "[The hot Jupiters] are much easier to model than Jupiter itself."

An eclipse, then blips

Then they compared the models to the light Kepler detected from real hot Jupiters. Kepler, which is now operating in its K2 mission, was designed to register the extremely tiny dip in starlight when a planet passes in front of its star, which is called a "transit." But in this case, researchers focused on the planets' "phase curves," or changes in light as the planet passes through phases, like Earth's moon.

Matching the modeled hot Jupiters to phase curves from real hot Jupiters revealed which curves were caused by the planet's heat, and which by light reflected by clouds in its atmosphere. By combining Kepler data with computer models, scientists were able to infer global cloud patterns on these distant worlds for the first time.

The new cloud view allowed the team to draw conclusions about wind and temperature differences on the hot Jupiters they studied. Just before the hotter planets passed behind their stars -- in a kind of eclipse -- a blip in the planet's optical light curve revealed a "hot spot" on the planet's eastern side.

And on cooler eclipsing planets, a blip was seen just after the planet re-emerged on the other side of the star, this time on the planet's western side.

The early blip on hotter worlds reveals that powerful winds were pushing the hottest, cloud-free part of the atmosphere, normally found directly beneath its sun, to the east. Meanwhile, on cooler worlds, clouds could bunch up and reflect more light on the "colder," western side of the planet, causing the post-eclipse blip.

"We're claiming that the west side of the planet's dayside is more cloudy than the east side," Parmentier said.

While the puzzling pattern has been seen before, this research was the first to study all the hot Jupiters showing this behavior.

This led to another first. By figuring out how clouds are distributed, which is intimately tied to the planet's overall temperature, scientists were able to determine what the clouds were probably made of.

Hot Jupiters are far too hot for water-vapor clouds like those on Earth. Instead, clouds on these planets are likely formed as exotic vapors condense to form minerals, chemical compounds like aluminum oxide, or even metals, like iron.

The science team found that manganese sulfide clouds probably dominate on "cooler" hot Jupiters, while silicate clouds prevail at higher temperatures. On these planets, the silicates likely "rain out" into the planet's interior, vanishing from the observable atmosphere.

In other words, a planet's average temperature, which depends on its distance from its star, governs the kinds of clouds that can form. That leads to different planets forming different types of clouds.

The new findings come as we mark the 21st anniversary of exoplanet hunting. On Oct. 6, 1995, a Swiss team announced the discovery of 51 Pegasi b, a hot Jupiter that was the first planet to be confirmed in orbit around a sun-like star. Parmentier and his team hope their revelations about the clouds on hot Jupiters could bring more detailed understanding of hot Jupiter atmospheres and their chemistry, a major goal of exoplanet atmospheric studies.

NASA Ames manages the Kepler and K2 missions for NASA's Science Mission Directorate. NASA's Jet Propulsion Laboratory in Pasadena, California, managed Kepler mission development. Ball Aerospace & Technologies Corporation operates the flight system with support from the Laboratory for Atmospheric and Space Physics at the University of Colorado at Boulder. This work was performed in part under contract with JPL, funded by NASA through the Sagan Fellowship Program, executed by the NASA Exoplanet Science Institute.