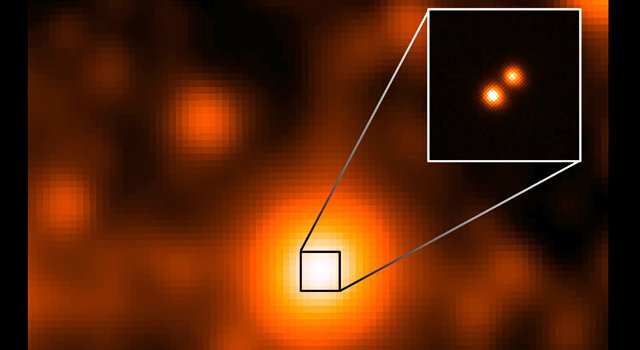 WISE J104915.57-531906 is at the center of the larger image, which was taken by the NASA's Wide-field Infrared Survey Explorer (WISE). This is the closest star system discovered since 1916, and the third closest to our sun. It is 6.5 light-years away. › Full image and caption

NASA's WISE mission has found the closest star system discovered since 1916 -- a pair of brown dwarfs right in our celestial backyard.

Both stars in the new binary system are "brown dwarfs," which are stars that are too small in mass to ever become hot enough to ignite hydrogen fusion. As a result, they are very cool and dim, resembling a giant planet like Jupiter more than a bright star like the sun.

"The distance to this brown dwarf pair is 6.5 light-years -- so close that Earth's television transmissions from 2006 are now arriving there," said Kevin Luhman, an associate professor of astronomy and astrophysics at Penn State University, University Park, Pa., and a researcher in Penn State's Center for Exoplanets and Habitable Worlds.

"It will be an excellent hunting ground for planets because the system is very close to Earth, which makes it a lot easier to see any planets orbiting either of the brown dwarfs."

The results will be published in the Astrophysical Journal Letters.

Edward (Ned) Wright, the principal investigator for the WISE satellite at UCLA, said, "One major goal when proposing WISE was to find the closest stars to the sun. WISE J1049-5319 is by far the closest star found to date using the WISE data, and the close-up views of this binary system we can get with big telescopes like Gemini and the future James Webb Space Telescope will tell us a lot about the low-mass stars known as brown dwarfs."

The Gemini South telescope in Chile was also used in this study for follow-up observations.

Read the full news release from Penn state at http://science.psu.edu/news-and-events/2013-news/Luhman3-2013 .

WISE completed its all-sky survey in 2011, after surveying the entire sky twice at infrared wavelengths. The maps have been released to the public, but an ongoing project called "AllWISE" will combine data from both sky scans. AllWISE will provide a systematic search across the sky for the nearby moving stars such as WISE J104915.57-531906, and also uncover fainter objects from the distant universe. Those data will be publicly available in late 2013.

NASA's Jet Propulsion Laboratory, Pasadena, Calif., manages, and operated, WISE for NASA's Science Mission Directorate. Edward Wright is the principal investigator and is at UCLA. The mission was selected competitively under NASA's Explorers Program managed by the agency's Goddard Space Flight Center in Greenbelt, Md. The science instrument was built by the Space Dynamics Laboratory in Logan, Utah. The spacecraft was built by Ball Aerospace & Technologies Corp. in Boulder, Colo. Science operations and data processing take place at the Infrared Processing and Analysis Center at the California Institute of Technology in Pasadena. Caltech manages JPL for NASA.