Climate Likely to Be on Hotter Side of Projections 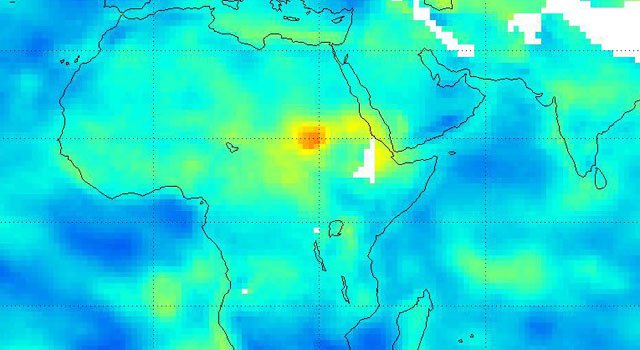 Scientists used observations from two NASA satellite instruments, including relative humidity data similar to these, from the Atmospheric Infrared Sounder (AIRS) instrument on NASA's Aqua spacecraft, to analyze how well leading global climate models reproduce observed relative humidity in Earth's tropics and subtropics. The study found climate models that most accurately captured these complex moisture processes and associated clouds were also the ones that showed the greatest amounts of warming as atmospheric greenhouse gases increase. This image of surface relative humidity anomaly made from AIRS data is representative only and is not from the study. Areas shown in reds and yellows are the driest; blue areas the moistest."› Full image
Credit: NASA/JPL-Caltech

A new NASA-funded study finds future warming of Earth's climate is likely to be on the high side of current projections.

A new NASA-funded study by the National Center for Atmospheric Research, Boulder, Colo., finds climate model projections that show a greater rise in global temperature are likely to prove more accurate than those showing a lesser rise. The findings, published today in the journal Science, could provide a breakthrough in the longstanding quest to narrow the range of global warming expected in coming decades and beyond.

The researchers found the climate models that most accurately captured these complex moisture processes and associated clouds, which have a major influence on global climate, were also the ones that showed the greatest amounts of warming as society emits more greenhouse gases into the atmosphere.

"There is a striking relationship between how well climate models simulate relative humidity in key areas and how much warming they show in response to increasing carbon dioxide," said Fasullo. "Given how fundamental these processes are to clouds and the overall global climate, our findings indicate that warming is likely to be on the high side of current projections."

The world's major global climate models are all based on long-established physical laws known to guide the atmosphere. However, because these relationships are challenging to translate into software, each model differs slightly in its portrayal of global climate. In particular, some processes, such as those associated with clouds, are too small to be represented properly. Although satellites observe many types of clouds, satellite failure, observing errors and other inconsistencies make it challenging to build a comprehensive global cloud census that is consistent over many years.

However, satellites perform better in measuring water vapor, and estimates of the global distribution of relative humidity, such as provided by AIRS, have become more reliable. Relative humidity also is incorporated in climate models to generate and dissipate clouds.

The authors focused on the dry subtropics because seasonal drying and associated decrease in clouds there, especially during May through August, serve as a good analog for patterns projected by climate models. "If we can better represent these regions in models, we can improve our predictions and provide society with a better sense of the impacts to expect in a warming world," said Fasullo.

AIRS project scientist Eric Fetzer of JPL, who was not involved with the study, called the work both encouraging and sobering. "These results were hiding in plain sight," he said. "We have known for 30 years that clouds complicate climate forecasts, but instead of looking directly at clouds, this study examines clear regions. Their conclusions indicate that better model physics for clear areas will lead to improved climate forecasts, but warming is likely to be at the high end of current forecasts."

Launched in 2002, AIRS, along with its partner microwave instrument, the Advanced Microwave Sounding Unit (AMSU-A), measures Earth's atmospheric temperature, water vapor, clouds and greenhouse gases with unprecedented accuracy and stability. Over the past decade, AIRS and AMSU-A have improved our understanding of Earth's global water and energy cycles, climate change and trends and how Earth's climate system is responding to increased greenhouse gases. For more on AIRS, visit: http://airs.jpl.nasa.gov/.

For more on the study, read the full NCAR news release at: https://www2.ucar.edu/atmosnews/news/8264/future-warming-likely-be-high-side-climate-projections-analysis-finds.