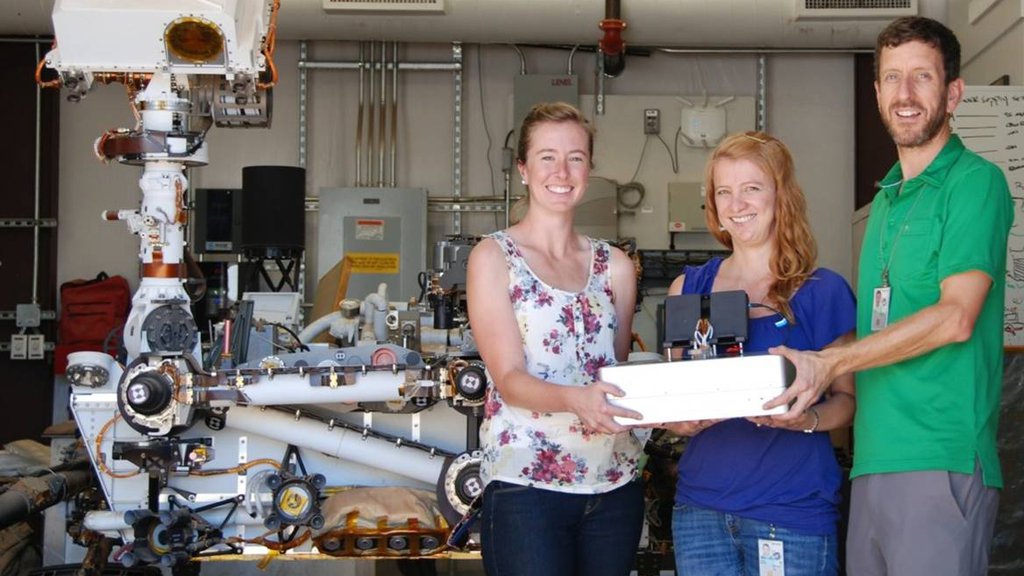 JPL researchers Jessica Creamer, Fernanda Mora and Peter Willis (left to right) pose with the Chemical Laptop, a device designed to detect amino acids and fatty acids. At left is a near-identical copy of the Curiosity rover, which has been on Mars since 2012.
Credit: NASA/JPL-Caltech 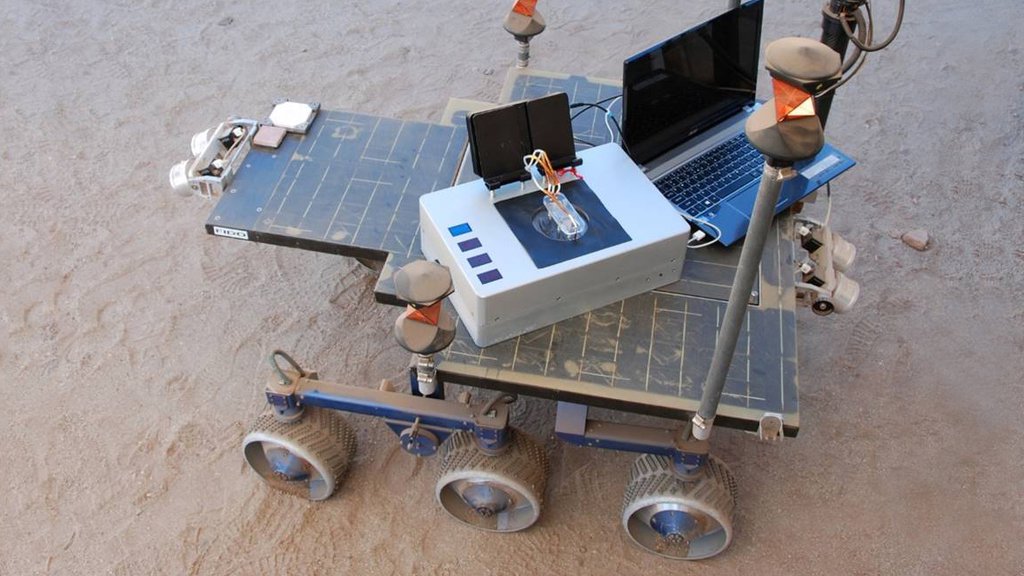 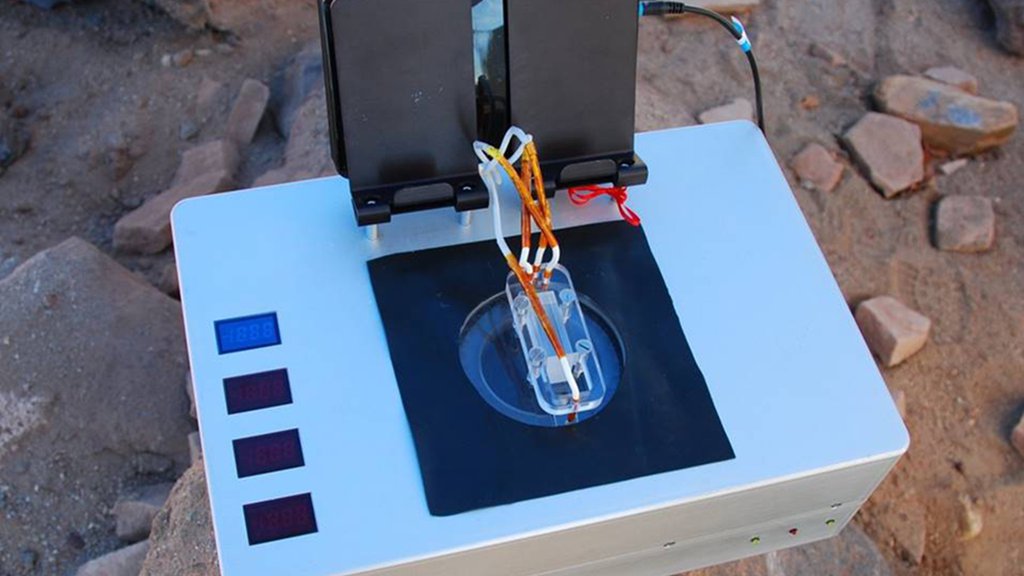 The Chemical Laptop, developed at JPL, analyzes liquid samples and detects amino acids and fatty acids. These are both chemicals that are essential to life.
Credit: NASA/JPL-Caltech

A small laptop-sized device is being developed at JPL to look for amino acids and fatty acids, with potential applications in space.

If you were looking for the signatures of life on another world, you would want to take something small and portable with you. That's the philosophy behind the "Chemical Laptop" being developed at NASA's Jet Propulsion Laboratory in Pasadena, California: a miniaturized laboratory that analyzes samples for materials associated with life.

"If this instrument were to be sent to space, it would be the most sensitive device of its kind to leave Earth, and the first to be able to look for both amino acids and fatty acids," said Jessica Creamer, a NASA postdoctoral fellow based at JPL.

Like a tricorder from "Star Trek," the Chemical Laptop is a miniaturized on-the-go laboratory, which researchers hope to send one day to another planetary body such as Mars or Europa. It is roughly the size of a regular computing laptop, but much thicker to make room for chemical analysis components inside. But unlike a tricorder, it has to ingest a sample to analyze it.

"Our device is a chemical analyzer that can be reprogrammed like a laptop to perform different functions," said Fernanda Mora, a JPL technologist who is developing the instrument with JPL's Peter Willis, the project's principal investigator. "As on a regular laptop, we have different apps for different analyses like amino acids and fatty acids."

Amino acids are building blocks of proteins, while fatty acids are key components of cell membranes. Both are essential to life, but can also be found in non-life sources. The Chemical Laptop may be able to tell the difference.

What it's looking for

Amino acids come in two types: Left-handed and right-handed. Like the left and right hands of a person, these amino acids are mirror images of each other but contain the same components. Some scientists hypothesize that life on Earth evolved to use just left-handed amino acids because that standard was adopted early in life's history, sort of like the way VHS became the standard for video instead of Betamax in the 1980s. It's possible that life on other worlds might use the right-handed kind.

"If a test found a 50-50 mixture of left-handed and right-handed amino acids, we could conclude that the sample was probably not of biological origin," Creamer said. "But if we were to find an excess of either left or right, that would be the golden ticket. That would be the best evidence so far that life exists on other planets."

The analysis of amino acids is particularly challenging because the left- and right-handed versions are equal in size and electric charge. Even more challenging is developing a method that can look for all the amino acids in a single analysis.

When the laptop is set to look for fatty acids, scientists are most interested in the length of the acids' carbon chain. This is an indication of what organisms are or were present.

The battery-powered Chemical Laptop needs a liquid sample to analyze, which is more difficult to obtain on a planetary body such as Mars. The group collaborated with JPL's Luther Beegle to incorporate an "espresso machine" technology, in which the sample is put into a tube with liquid water and heated to above 212 degrees Fahrenheit (100 degrees Celsius). The water then comes out carrying the organic molecules with it. The Sample Analysis at Mars (SAM) instrument suite on NASA's Mars Curiosity rover utilizes a similar principle, but it uses heat without water.

Inside a "separation channel" of the microchip, there are already chemical additives that mix with the sample. Some of these species will only interact with right-handed amino acids, and some will only interact with the left-handed variety. These additives will change the relative amount of time the left and right-handed amino acids are in the separation channel, allowing scientists to determine the "handedness" of amino acids in the sample.

Last year the researchers did a field test at JPL's Mars Yard, where they placed the Chemical Laptop on a test rover.

"This was the first time we showed the instrument works outside of the laboratory setting. This is the first step toward demonstrating a totally portable and automated instrument that can operate in the field," said Mora.

For this test, the laptop analyzed a sample of "green rust," a mineral that absorbs organic molecules in its layers and may be significant in the origin of life, said JPL's Michael Russell, who helped provide the sample.

"One ultimate goal is to put a detector like this on a spacecraft such as a Mars rover, so for our first test outside the lab we literally did that," said Willis.

Since then, Mora has been working to improve the sensitivity of the Chemical Laptop so it can detect even smaller amounts of amino acids or fatty acids. Currently, the instrument can detect concentrations as low as parts per trillion. Mora is currently testing a new laser and detector technology.

Coming up is a test in the Atacama Desert in Chile, with collaboration from NASA's Ames Research Center, Moffett Field, California, through a grant from NASA's Planetary Science & Technology Through Analog Research (PSTAR) program.

"This could also be an especially useful tool for icy-worlds targets such as Enceladus and Europa. All you would need to do is melt a little bit of the ice, and you could sample it and analyze it directly," Creamer said.

The Chemical Laptop technology has applications for Earth, too. It could be used for environmental monitoring -- analyzing samples directly in the field, rather than taking them back to a laboratory. Uses for medicine could include testing whether the contents of drugs are legitimate or counterfeit.

Creamer recently won an award for her work in this area at JPL's Postdoc Research Day Poster Session.

NASA's PICASSO program, part of the agency's Science Mission Directorate in Washington, supported this research. The California Institute of Technology in Pasadena manages JPL for NASA.