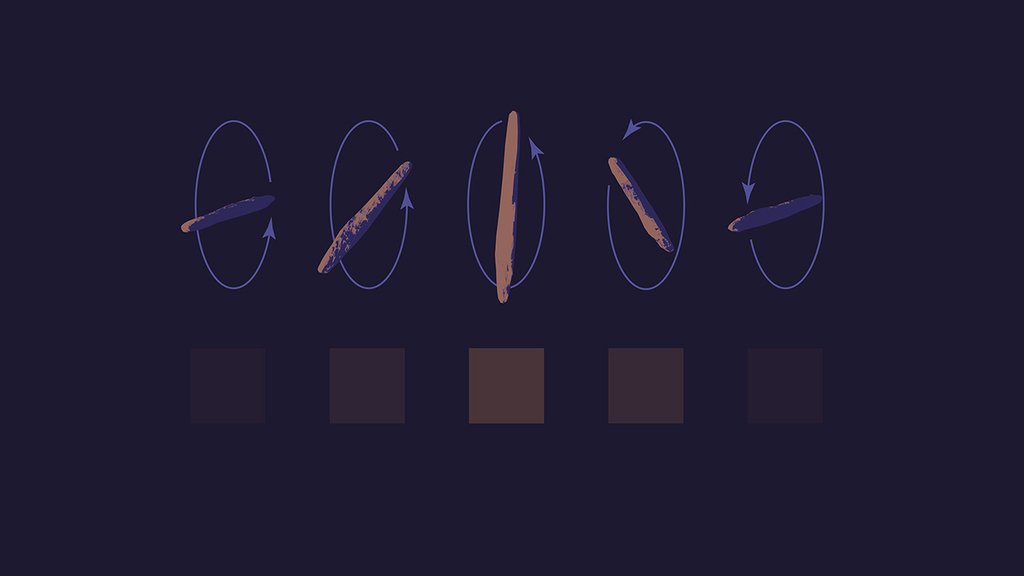 'Oumuamua was too small to appear as anything more than a point of light, even in the largest telescopes. But we know that it must be a highly elongated object because it varied dramatically in brightness over every 7-to-8-hour period. It appeared brightest when its full length faced the Earth (middle image), but dimmed dramatically when it was pointed towards the Earth (left and right images). The brightness variations (represented as squares on bottom row) repeated over and over as the object tumbled through space.
Credit: NASA/JPL-Caltech

The interstellar object 'Oumuamua perplexed scientists in October 2017 as it whipped past Earth at an unusually high speed.

The interstellar object 'Oumuamua perplexed scientists in October 2017 as it whipped past Earth at an unusually high speed. This mysterious visitor is the first object ever seen in our solar system that is known to have originated elsewhere.

Scientists conclude that interstellar object 'Oumuamua must be very elongated because of its dramatic variations in brightness as it tumbled through space. They also conclude that vents on the surface must have emitted jets of gases, giving the object a slight boost in speed, which researchers detected by measuring the position of the object as it passed by in 2017. Credit: NASA/JPL-Caltech

-It came from outside the solar system --Because of its high speed (196,000 mph, or 87.3 kilometers per second) and the trajectory it followed as it whipped around the Sun, scientists are confident 'Oumuamua originated beyond our solar system. The object flew by Earth so fast its speed couldn't be due to the influence of the Sun's gravity alone, so it must have approached the solar system at an already high speed and not interacted with any other planets. On its journey past our star, the object came within a quarter of the distance between the Sun and Earth.

-Its trajectory is hyperbolic -- By tracking this object as it passed within view of telescopes, scientists can see that this high-speed object won't be captured by our Sun's gravity. It won't circle back around again on an elliptical path. Instead, it will follow the shape of a hyperbola -- that is, it will keep on going out of the solar system, and never come back.

-It doesn't look like a comet, but it behaves like one -- A comet is a small icy body that, when heated by the Sun, develops a coma -- a fuzzy atmosphere and tail made of volatile material vaporizing off the comet body. At first, scientists assumed 'Oumuamua was a comet. But because 'Oumuamua appears in telescope images as a single point of light without a coma, scientists then concluded it was an asteroid. But when astronomers saw the object was accelerating ever so slightly, they realized that a coma and jets might not be visible to the telescopes used to observe it. The jetting of volatile materials or "outgassing" would explain why 'Oumuamua was accelerating in a subtle, unexpected way when only gravity from our solar system is taken into account.

-It must be elongated --While it is impossible to take a close-up photo of 'Oumuamua, its dramatic variations in brightness over time suggest it is highly elongated. By calculating what kind of object could dim and brighten in this way, scientists realized the object must be up to 10 times as long as it is wide. Currently, 'Oumuamua is estimated to be about half a mile (800 meters) long. Astronomers had never seen a natural object with such extreme proportions in the solar system before.

-It tumbles through space -- The unusual brightness variations also suggest the object does not rotate around just one axis. Instead, it is tumbling -- not just end over end, but about a second axis at a different period, too. A small object's rotation state can easily change, especially if it is outgassing, so this tumbling behavior could have started recently. The object appears to make a complete rotation every 7.3 hours.

What we don't know

-What does it look like? All that astronomers have seen of 'Oumuamua is a single point of light. But because of its trajectory and small-scale accelerations, it must be smaller than typical objects from the Oort Cloud, the giant group of icy bodies that orbit the solar system roughly 186 billion miles (300 billion kilometers) away from the Sun. Oort Cloud objects formed in our own solar system, but were kicked out far beyond the planets by the immense gravity of Jupiter. They travel slower than 'Oumuamua and will forever be bound by the gravity of our Sun. But besides its elongated nature, scientists do not know what kinds of features 'Oumuamua has on its surface, if any. An elongated shape would explain its rotation behavior, but its exact appearance is unknown.

-What is it made of? Comets from our solar system have a lot of dust, but because none is visible coming off 'Oumuamua, scientists conclude it may not have very much at all. It is impossible to know what materials make up 'Oumuamua, but it could have gases such as carbon monoxide or carbon dioxide coming off the surface that are less likely to produce a visible coma or tail.

-Where did it come from? 'Oumuamua came into our solar system from another star system in the galaxy, but which one? Scientists observe that its incoming speed was close to the average motion of stars near our own, and since the speed of younger stars is more stable than older stars, 'Oumuamua may have come from a relatively young system. But this is still a guess -- it is possible the object has been wandering around the galaxy for billions of years.

-What is it doing now? After January 2018, 'Oumuamua was no longer visible to telescopes, even in space. But scientists continue to analyze it and crack open more mysteries about this unique interstellar visitor.