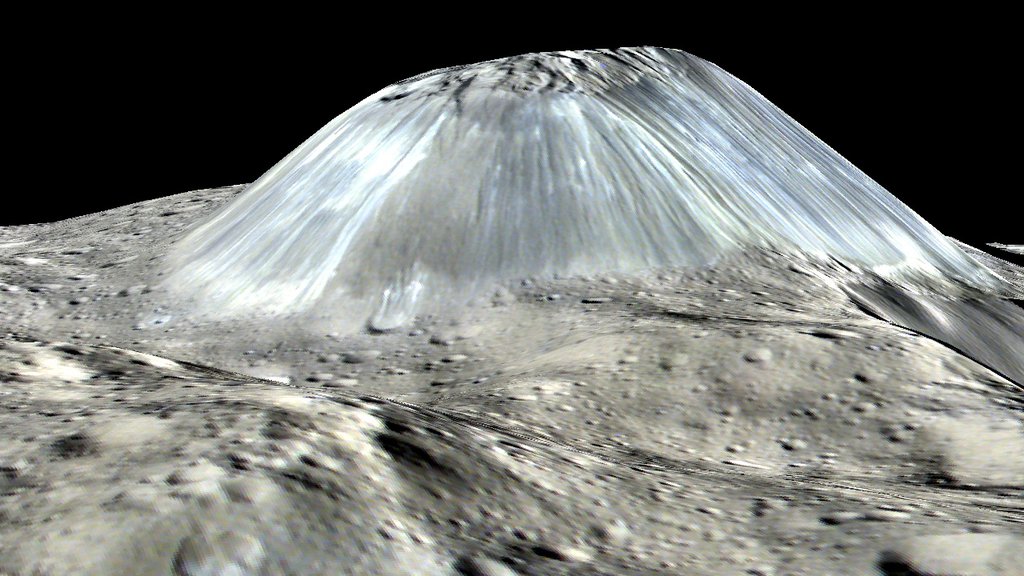 Ahuna Mons, Ceres' unique tall mountain, hosts the only example of bright material on Ceres that is not associated with an impact. This is a simulated perspective view.› Full image and caption
Credit: NASA/JPL-Caltech/UCLA/MPS/DLR/IDA 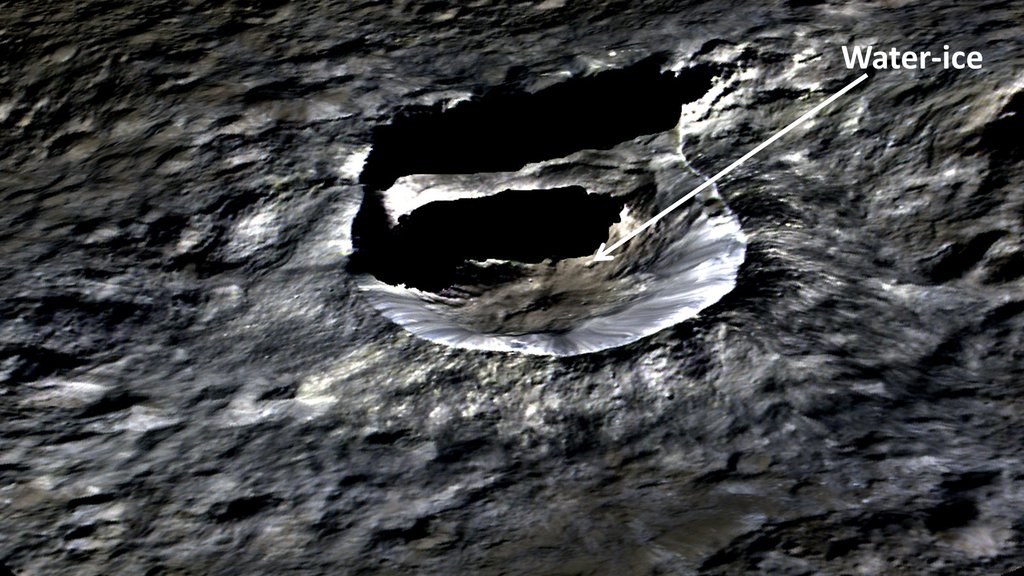 The small, bright crater Oxo (6 miles, 10 kilometers wide) on Ceres is seen in this perspective view. The elevation has been exaggerated by a factor of two.› Full image and caption
Credit: NASA/JPL-Caltech/UCLA/MPS/DLR/IDA/PSI

A lonely 3-mile-high (5-kilometer-high) mountain on Ceres is likely volcanic in origin, and the dwarf planet may have a weak, temporary atmosphere.

A lonely 3-mile-high (5-kilometer-high) mountain on Ceres is likely volcanic in origin, and the dwarf planet may have a weak, temporary atmosphere. These are just two of many new insights about Ceres from NASA's Dawn mission published this week in six papers in the journal Science.

"Dawn has revealed that Ceres is a diverse world that clearly had geological activity in its recent past," said Chris Russell, principal investigator of the Dawn mission, based at the University of California, Los Angeles.

A surprising finding emerged in the paper led by Russell: Dawn may have detected a weak, temporary atmosphere. Dawn's gamma ray and neutron (GRaND) detector observed evidence that Ceres had accelerated electrons from the solar wind to very high energies over a period of about six days. In theory, the interaction between the solar wind's energetic particles and atmospheric molecules could explain the GRaND observations.

A temporary atmosphere would be consistent with the water vapor the Herschel Space Observatory detected at Ceres in 2012-2013. The electrons that GRaND detected could have been produced by the solar wind hitting the water molecules that Herschel observed, but scientists are also looking into alternative explanations.

"We're very excited to follow up on this and the other discoveries about this fascinating world," Russell said.

Ahuna Mons as a Cryovolcano

Ahuna Mons is a volcanic dome unlike any seen elsewhere in the solar system, according to a new analysis led by Ottaviano Ruesch of NASA's Goddard Space Flight Center, Greenbelt, Maryland, and the Universities Space Research Association. Ruesch and colleagues studied formation models of volcanic domes, 3-D terrain maps and images from Dawn, as well as analogous geological features elsewhere in our solar system. This led to the conclusion that the lonely mountain is likely volcanic in nature. Specifically, it would be a cryovolcano -- a volcano that erupts a liquid made of volatiles such as water, instead of silicates. "This is the only known example of a cryovolcano that potentially formed from a salty mud mix, and that formed in the geologically recent past," Ruesch said.

For more details on this study, see:
http://www.nasa.gov/feature/goddard/2016/ceres-cryo-volcano

Ceres: Between a Rocky and Icy Place

While Ahuna Mons may have erupted liquid water in the past, Dawn has detected water in the present, as described in a study led by Jean-Philippe Combe of the Bear Fight Institute, Winthrop, Washington. Combe and colleagues used Dawn's visible and infrared mapping spectrometer (VIR) to detect probable water ice at Oxo Crater, a small, bright, sloped depression at mid-latitudes on Ceres.

Exposed water-ice is rare on Ceres, but the low density of Ceres, the impact-generated flows and the very existence of Ahuna Mons suggest that Ceres' crust does contain a significant component of water-ice. This is consistent with a study of Ceres' diverse geological features led by Harald Hiesinger of the Westfälische Wilhelms-Universität, Münster, Germany. The diversity of geological features on Ceres is further explored in a study led by Debra Buczkowski of the Johns Hopkins Applied Physics Laboratory, Laurel, Maryland.

Impact craters are clearly the most abundant geological feature on Ceres, and their different shapes help tell the intricate story of Ceres' past. Craters that are roughly polygonal -- that is, shapes bounded by straight lines -- hint that Ceres' crust is heavily fractured. In addition, several Cerean craters have patterns of visible fractures on their floors.

Some, like tiny Oxo, have terraces, while others, such as the large Urvara Crater (106 miles, 170 kilometers wide), have central peaks. There are craters with flow-like features, and craters that imprint on other craters, as well as chains of small craters. Bright areas are peppered across Ceres, with the most reflective ones in Occator Crater. Some crater shapes could indicate water-ice in the subsurface.

The dwarf planet's various crater forms are consistent with an outer shell for Ceres that is not purely ice or rock, but rather a mixture of both -- a conclusion reflected in other analyses. Scientists also calculated the ratio of various craters' depths to diameters, and found that some amount of crater relaxation must have occurred. Additionally, there are more craters in the northern hemisphere of Ceres than the south, where the large Urvara and Yalode craters are the dominant features.

"The uneven distribution of craters indicates that the crust is not uniform, and that Ceres has gone through a complex geological evolution," Hiesinger said.

What are the rocky materials in Ceres' crust? A study led by Eleonora Ammannito of the University of California, Los Angeles, finds that clay-forming minerals called phyllosilicates are all over Ceres. These phyllosilicates are rich in magnesium and also have some ammonium embedded in their crystalline structure. Their distribution throughout the dwarf planet's crust indicates Ceres' surface material has been altered by a global process involving water.

Although Ceres' phyllosilicates are uniform in their composition, there are marked differences in how abundant these materials are on the surface. For example, phyllosilicates are especially prevalent in the region around the smooth, "pancake"-like crater Kerwan (174 miles, 280 kilometers in diameter), and less so at Yalode Crater (162 miles, 260 kilometers in diameter), which has areas of both smooth and rugged terrain around it. Since Kerwan and Yalode are similar in size, this may mean that the composition of the material into which they impacted may be different. Craters Dantu and Haulani both formed recently in geologic time, but also seem to differ in composition.

"In comparing craters such as Dantu and Haulani, we find that their different material mixtures could extend beneath the surface for miles, or even tens of miles in the case of the larger Dantu," Ammannito said.

Now in its extended mission, the Dawn spacecraft has delivered a wealth of images and other data from its current perch at 240 miles (385 kilometers) above Ceres' surface, which is closer to the dwarf planet than the International Space Station is to Earth. The spacecraft will be increasing its altitude at Ceres on Sept. 2, as scientists consider questions that can be examined from higher up.