This animation shows a sequence of images taken by NASA's Dawn spacecraft on May 4, 2015, from a distance of 8,400 miles (13,600 kilometers), in its RC3 mapping orbit. The image resolution is 0.8 mile (1.3 kilometers) per pixel.› Full image and caption
Credit: NASA/JPL-Caltech/UCLA/MPS/DLR/IDA

The mysterious bright spots on the dwarf planet Ceres are better resolved in a new sequence of images taken by NASA's Dawn spacecraft on May 3 and 4, 2015.

The mysterious bright spots on the dwarf planet Ceres are better resolved in a new sequence of images taken by NASA's Dawn spacecraft on May 3 and 4, 2015. The images were taken from a distance of 8,400 miles (13,600 kilometers). The animation is available at:

In this closest-yet view, the brightest spots within a crater in the northern hemisphere are revealed to be composed of many smaller spots. However, their exact nature remains unknown. 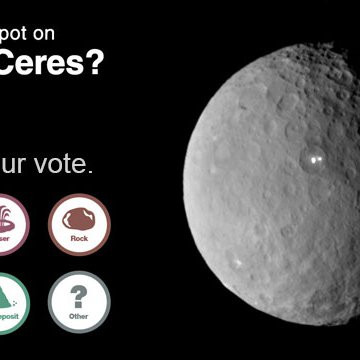 "Dawn scientists can now conclude that the intense brightness of these spots is due to the reflection of sunlight by highly reflective material on the surface, possibly ice," said Christopher Russell, principal investigator for the Dawn mission from the University of California, Los Angeles.

These images offer scientists new insights into crater shapes and sizes, and a host of other intriguing geological features on the surface. The image resolution is 0.8 mile (1.3 kilometers) per pixel.

Dawn has now concluded its first mapping orbit, in which it completed one 15-day full circle around Ceres while making a host of new observations with its scientific instruments. On May 9, the spacecraft powered on its ion engine to begin the month-long descent toward its second mapping orbit, which it will enter on June 6. In this next phase, Dawn will circle Ceres about every three days at an altitude of 2,700 miles (4,400 kilometers) -- three times closer than the previous orbit. During this phase, referred to as Dawn's survey orbit, the spacecraft will comprehensively map the surface to begin unraveling Ceres' geologic history and assess whether the dwarf planet is active. The spacecraft will pause twice to take images of Ceres as it spirals down into this new orbit.

Dawn is the first mission to visit a dwarf planet, and the first to orbit two distinct solar system targets. It studied giant asteroid Vesta for 14 months in 2011 and 2012, and arrived at Ceres on March 6, 2015.