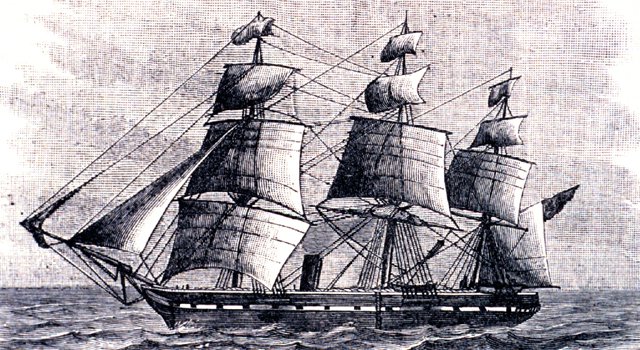 Drawing of the HMS Challenger survey vessel preparing to measure ocean temperatures by lowering thermometers deep into the ocean on ropes in 1872. A new NASA and University of Tasmania study combined the ship's 135-plus-year-old measurements of ocean temperatures with modern observations to get a picture of how the world's ocean has changed since the Challenger's voyage. The research reveals that warming of Earth can be clearly detected since 1873, with the ocean absorbing the majority of the heat.
Credit: NOAA

Data from a British high-seas scientific expedition in the 1870s have provided further confirmation of human-produced global warming over the past century.

A new NASA and university analysis of ocean data collected more than 135 years ago by the crew of the HMS Challenger oceanographic expedition provides further confirmation that human activities have warmed our planet over the past century.

Researchers from the University of Tasmania, Sandy Bay, Australia; and NASA's Jet Propulsion Laboratory, Pasadena, Calif., combined the ship's measurements of ocean temperatures with modern observations from the international Argo array of ocean profiling floats. They used both as inputs to state-of-the-art climate models, to get a picture of how the world's oceans have changed since the Challenger's voyage.

The Challenger expedition, from 1872 to 1876, was the world's first global scientific survey of life beneath the ocean surface. Along the way, scientists measured ocean temperatures, lowering thermometers hundreds of meters deep on ropes.

"The key to this research was to determine the range of uncertainty for the measurements taken by the crew of the Challenger," said Josh Willis, a JPL climate scientist and NASA project scientist for the upcoming U.S./European Jason-3 oceanography satellite, scheduled to launch in 2015. "After we had taken all these uncertainties into account, it became apparent that the rate of warming we saw across the oceans far exceeded the degree of uncertainty around the measurements. So, while the uncertainty was large, the warming signal detected was far greater."

Uncertainties around the Challenger's measurements were caused by the limited areas measured during the voyage; the actual depths the thermometers descended to; and the likely natural variation in temperature that could occur in each region during the voyage.

"Our research revealed warming of the planet can be clearly detected since 1873 and that our oceans continue to absorb the great majority of this heat," said researcher and lead author Will Hobbs of the University of Tasmania's Institute for Marine and Antarctic Studies and the Australian Research Council's Centre of Excellence for Climate System Science. "Currently, scientists estimate the oceans absorb more than 90 percent of the heat trapped by greenhouse gases, and we attribute the global warming to anthropogenic (human-produced) causes."

The Challenger expedition measurements also revealed that thermal expansion of sea water caused by global warming contributed about 40 percent of the total sea level rise seen in tide gauges from 1873 to 1955. The remaining 60 percent was likely to have come from the melting of ice sheets and glaciers. Prior to this research, climate models offered the only way to estimate the change before the 1950s.

Results of the study are published in the journal Geophysical Research Letters.

For more on the study, visit: http://www.imas.utas.edu.au/right-column-content/whats-new3/news/century-old-science-helps-confirm-global-warming .