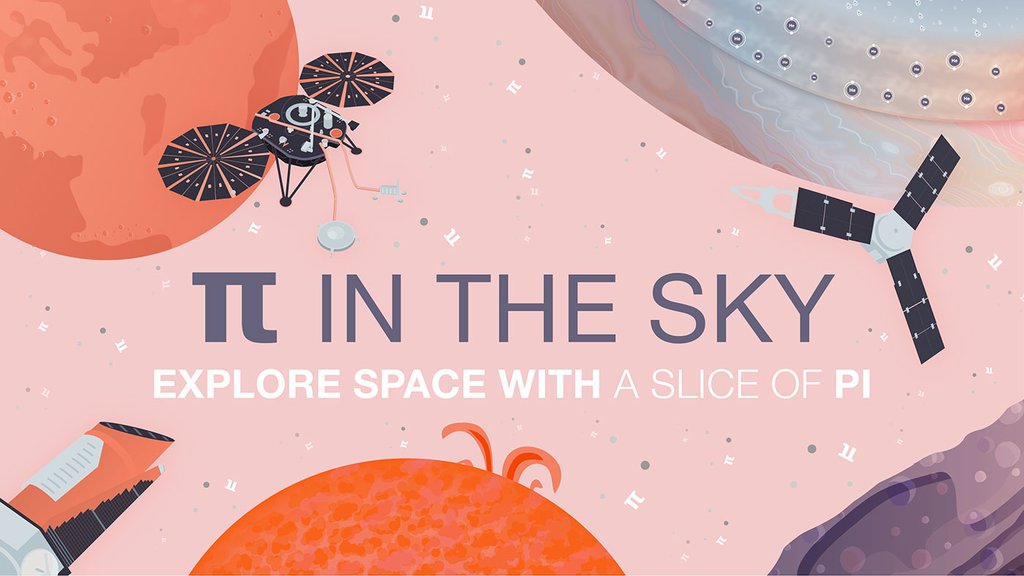 This year's NASA Pi Day Challenge, to be released on March 9, features the agency's InSight Mars lander, Kepler space telescope and Juno spacecraft at Jupiter - plus a visit from an interstellar object.
Credit: NASA/JPL-Caltech

On March 14, JPL will celebrate Pi Day with the fifth annual "Pi in the Sky" illustrated math challenge, featuring pi-related space problems that you can do at home.

March 14 is Pi Day, a celebration of the beloved number known as pi. JPL is celebrating Pi Day with the fifth annual "Pi in the Sky" illustrated math challenge, featuring pi-related space problems that you can do at home.

Pi is often abbreviated as 3.14 (which is why Pi Day is celebrated on March 14, or 3/14), but there are actually an infinite number of digits in pi. Using computer programs, mathematicians have calculated trillions of those digits so far.

Pi can be used to derive characteristics of a circle or a sphere, such as circumference or surface area. Scientists and engineers at NASA's Jet Propulsion Laboratory, Pasadena, California, frequently use pi to learn about moons, planets, stars and other spherical bodies, and to track the orbits of satellites and spacecraft.

The "Pi in the Sky" challenge, created by JPL's Education Office, features math problems that illustrate how pi can be used to learn about all kinds of curious features of the universe, including earthquakes on Mars, helium rain on Jupiter, and planets orbiting other stars.

"All of the problems in the 'Pi in the Sky' challenge are real problems that JPL scientists and engineers solve using pi," said Ota Lutz, a senior education specialist at JPL who helped create the Pi Day Challenge.

In previous years, Pi in the Sky featured problems about how NASA space probes gather information about objects in our solar system, how scientists search for planets around other stars, and how astronomers predict the occurrence of solar eclipses. The new problems will be posted online on March 9, and solutions will be posted on March 15. You can find the previous years' challenge problems online as well.

The challenge is geared toward students in grades 5 through 12, and JPL offers additional resources for teachers and educators who want to use the problems in the classroom. But Lutz said adults love trying out the problems as well, and everyone should attempt the challenge even if they aren't familiar with space exploration.

"The Pi in the Sky problems give people a little glimpse into what goes on at JPL," Lutz said. "And that's empowering, because it shows people that they can understand some of the magic that goes into space exploration."

Pi belongs to a special class of numbers known as "irrational numbers." These numbers contain an infinite number of digits that do not repeat or show any pattern, and they cannot be represented as a ratio of two integers. (Integers include all whole numbers, as well as their negative counterparts, such as -1, -2, -3, etc.) Pi enthusiasts regularly use Pi Day as an opportunity to test their memorization skills, because the random nature of the digits makes them difficult to remember. Members of the public are encouraged to share photos and stories from their Pi Day celebration activities through the Education website.