Caught in the Act: Fireballs Light up Jupiter 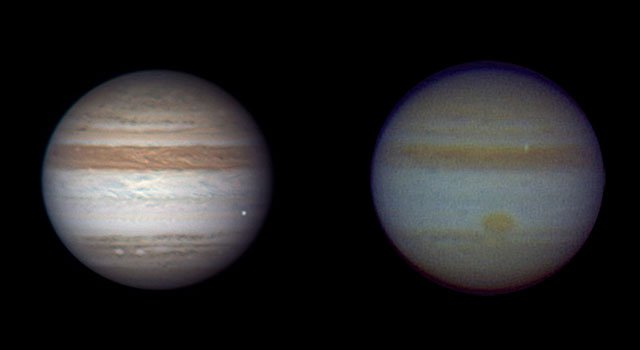 A fleeting bright dot on each of these images of Jupiter marks a small comet or asteroid burning up in the atmosphere. The image on the left was taken on June 3, 2010, by amateur astronomer Anthony Wesley, who was visiting a friend in Broken Hill, Australia, when he obtained the image with a 37-centimeter (14.5-inch) telescope. › Full image and caption 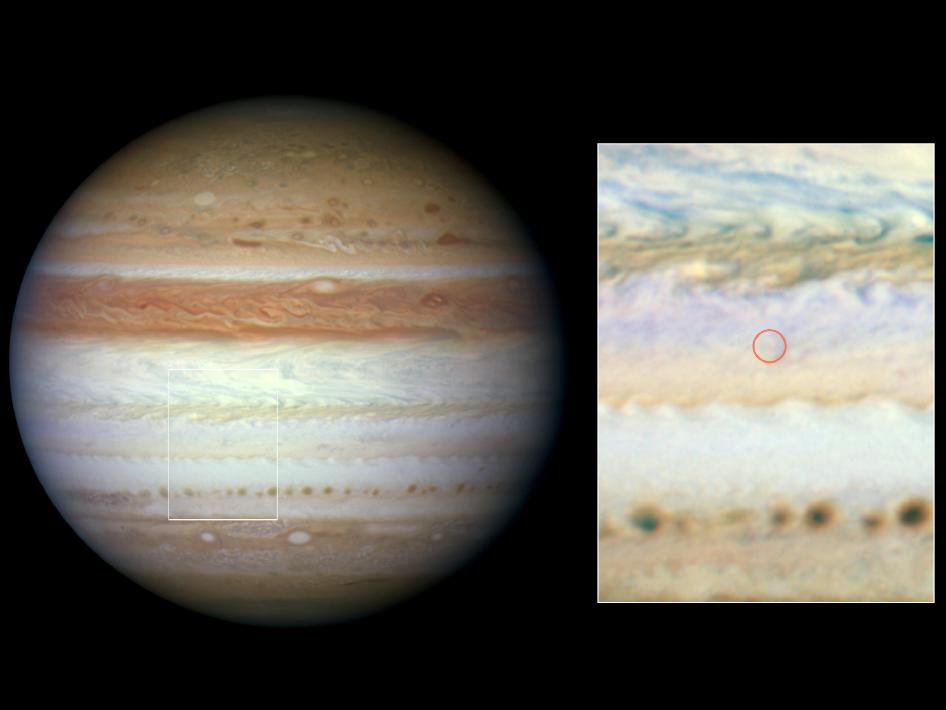 Detailed observations made by the Hubble Space Telescope have found an answer to the flash of light seen June 3, 2010, on Jupiter.› Full image and caption
Credit: NASA/ESA/GSFC/UCB/SSI/Jupiter Impact Science Team 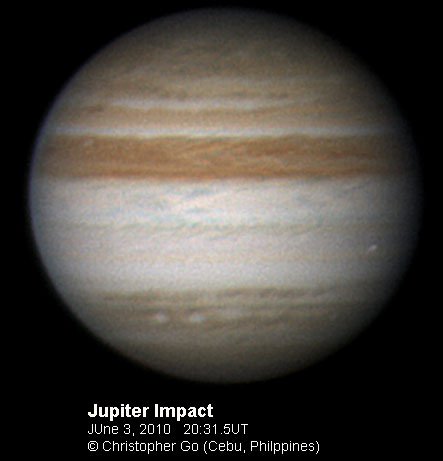 This image by amateur astronomer Christopher Go, of Cebu, Philippines, confirms that the glimmer amateur astronomer Anthony Wesley saw in his telescope on June 3, 2010, was an object burning up in the Jupiter atmosphere.
Credit: C. Go

Amateur astronomers working with professional astronomers have spotted two fireballs lighting up Jupiter's atmosphere this summer, marking the first time Earth-based telescopes have captured relatively small objects burning up in the atmosphere of the giant planet. The two fireballs - which produced bright freckles on Jupiter that were visible through backyard telescopes - occurred on June 3, 2010, and August 20, 2010, respectively.

A new paper that includes both pros and amateurs, led by Ricardo Hueso of the Universidad del País Vasco, Bilbao, Spain, appears today in the Astrophysical Journal Letters. In the paper, astronomers estimate the object that caused the June 3 fireball was 8 to 13 meters (30 to 40 feet) in diameter. The object is comparable in size to the asteroid 2010 RF12 that flew by Earth on Wednesday, Sept. 8, and slightly larger than the asteroid 2008 TC3, which burned up above Sudan two years ago.

An impact of this kind on Earth would not be expected to cause damage on the ground. The energy released by the June 3 fireball as it collided with Jupiter's atmosphere was five to 10 times less than the 1908 Tunguska event on Earth, which knocked over tens of millions of trees in a remote part of Russia. Analysis is continuing on the Aug. 20 fireball, but scientists said it was comparable to the June 3 object.

"Jupiter is a big gravitational vacuum cleaner," said Glenn Orton, a co-author on the paper and an astronomer at NASA's Jet Propulsion Laboratory, Pasadena, Calif. "It is clear now that relatively small objects, remnants of the formation of the solar system 4.5 billion years ago, still hit Jupiter frequently. Scientists are trying to figure out just how frequently."

Orton and colleagues said this kind of discovery couldn't have been made without amateur astronomers around the world, whose observations of Jupiter provide a near round-the-clock surveillance that would be impossible to do with the long lines of scientists waiting to use the large telescopes. Amateur astronomers, for example, were the first to see the dark spot that appeared on Jupiter in July 2009 as the result of an impact. Professional astronomers are still analyzing that impact.

Anthony Wesley, an amateur astronomer from Murrumbateman, Australia, who was also the first to take a picture of that dark spot on Jupiter in July 2009, was the first to see the tiny flash on June 3. Amateur astronomers had their telescopes trained on Jupiter that day because they were in the middle of "Jupiter season," when the planet is high in the sky and at its largest size, as seen by backyard telescopes.

Wesley was visiting an amateur astronomer friend about 1,000 kilometers (600 miles) away in Broken Hill, and he set a digital video camera to record images from his telescope at about 60 frames per second. He was watching the live video on a computer screen at his friend's house when he saw a two-and-a-half-second-long flash of light near the limb of the planet.

"It was clear to me straight away it had to be an event on Jupiter," he said. "I'm used to seeing other momentary flashes in the camera from cosmic ray impacts, but this was different. Cosmic ray strikes last only for one frame of video, whereas this flash gradually brightened and then faded over 133 frames."

Wesley sent a message out on his e-mail list of amateur and professional astronomers, which included Orton. After receiving Wesley's e-mail, Christopher Go of Cebu, Philippines -- who like Wesley, is an amateur astronomer -- checked his own recordings and confirmed that he had seen a flash, too.

Before Wesley's work, scientists didn't know these small-size impacts could be observed, Hueso explained. "The discovery of optical flashes produced by objects of this size helps scientists understand how many of these objects are out there and the role they played in the formation of our solar system," Hueso said.

For three days afterward, Hueso and colleagues looked for signs of the impact in high-resolution images from larger telescopes: NASA's Hubble Space Telescope, Gemini Observatory telescopes in Hawaii and Chile, the Keck telescope in Hawaii, the NASA Infrared Telescope Facility in Hawaii and the European Southern Observatory's Very Large Telescope in Chile. Scientists analyzed the images for thermal disruptions and chemical signatures seen in previous images of Jupiter impacts. In this case, they saw no signs of debris, which allowed them to limit the size of the impactor.

Based on all these images, and particularly those obtained by Wesley and Go, the astronomers were able to confirm the flash came from some kind of object – probably a small comet or asteroid – that burned up in Jupiter's atmosphere. The impactor likely had a mass of about 500 to 2,000 metric tons (1 million to 4 million pounds), probably about 100,000 times less massive than the object in July 2009.

Calculations also estimated this June 3 impact released about 1 to 4 quadrillion joules (300 million to 1 billion kilowatt-hours) of energy. The second fireball, on Aug. 20, was detected by the amateur Japanese astronomer Masayuki Tachikawa and later confirmed by Aoki Kazuo and Masayuki Ishimaru. It flashed for about 1.5 seconds. The Keck telescope, observing less than a day later, also found no subsequent debris remnants. Scientists are still analyzing this second flash.

Although collisions of this size had never before been detected on Jupiter, some previous models predicted around one collision of this kind a year. Another predicted up to 100 such collisions. Scientists now believe the frequency must be closer to the high end of the scale.

"It is interesting to note that whereas Earth gets smacked by a 10-meter-sized object about every 10 years on average, it looks as though Jupiter gets hit with the same-sized object a few times each month," said Don Yeomans, manager of the Near-Earth Object Program Office at JPL, who was not involved in the paper. "The Jupiter impact rate is still being refined and studies like this one help to do just that."
› Play video by Amateur astronomer Christopher Go
› Play video by amateur astronomer Anthony Wesley