Catching Black Holes on the Fly 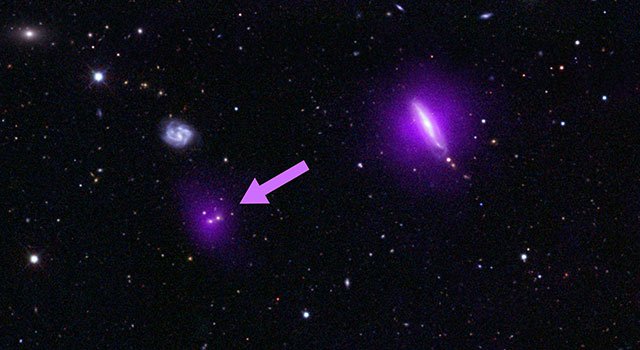 NASA's black-hole-hunter spacecraft, the Nuclear Spectroscopic Telescope Array, or NuSTAR, has "bagged" its first 10 supermassive black holes. The mission, which has a mast the length of a school bus, is the first telescope capable of focusing the highest-energy X-ray light into detailed pictures.

The new black-hole finds are the first of hundreds expected from the mission over the next two years. These gargantuan structures -- black holes surrounded by thick disks of gas -- lie at the hearts of distant galaxies between 0.3 and 11.4 billion light-years from Earth.

"We found the black holes serendipitously," explained David Alexander, a NuSTAR team member based in the Department of Physics at Durham University in England and lead author of a new study appearing Aug. 20 in the Astrophysical Journal. "We were looking at known targets and spotted the black holes in the background of the images."

Additional serendipitous finds such as these are expected for the mission. Along with the mission's more targeted surveys of selected patches of sky, the NuSTAR team plans to comb through hundreds of images taken by the telescope with the goal of finding black holes caught in the background.

Once the 10 black holes were identified, the researchers went through previous data taken by NASA's Chandra X-ray Observatory and the European Space Agency's XMM-Newton satellite, two complementary space telescopes that see lower-energy X-ray light. The scientists found that the objects had been detected before. It wasn't until the NuSTAR observations, however, that they stood out as exceptional, warranting closer inspection.

By combining observations taken across the range of the X-ray spectrum, the astronomers hope to crack unsolved mysteries of black holes. For example, how many of them populate the universe?

"We are getting closer to solving a mystery that began in 1962," said Alexander. "Back then, astronomers had noted a diffuse X-ray glow in the background of our sky but were unsure of its origin. Now, we know that distant supermassive black holes are sources of this light, but we need NuSTAR to help further detect and understand the black hole populations."

This X-ray glow, called the cosmic X-ray background, peaks at the high-energy frequencies that NuSTAR is designed to see, so the mission is key to identifying what's producing the light. NuSTAR can also find the most hidden supermassive black holes, buried by thick walls of gas.

"The highest-energy X-rays can pass right through even significant amounts of dust and gas surrounding the active supermassive black holes," said Fiona Harrison, a study co-author and the mission's principal investigator at the California Institute of Technology, Pasadena.

Data from NASA's Wide-field Infrared Survey Explorer, or WISE, and Spitzer missions also provide missing pieces in the puzzle of black holes by weighing the mass of their host galaxies.

"Our early results show that the more distant supermassive black holes are encased in bigger galaxies," said Daniel Stern, a co-author of the study and the project scientist for NuSTAR at NASA's Jet Propulsion Laboratory, Pasadena, Calif. "This is to be expected. Back when the universe was younger, there was a lot more action with bigger galaxies colliding, merging and growing."

Future observations will reveal more about the beastly happenings of black holes, near and far. In addition to hunting remote black holes, NuSTAR is also searching for other exotic objects within our Milky Way galaxy.