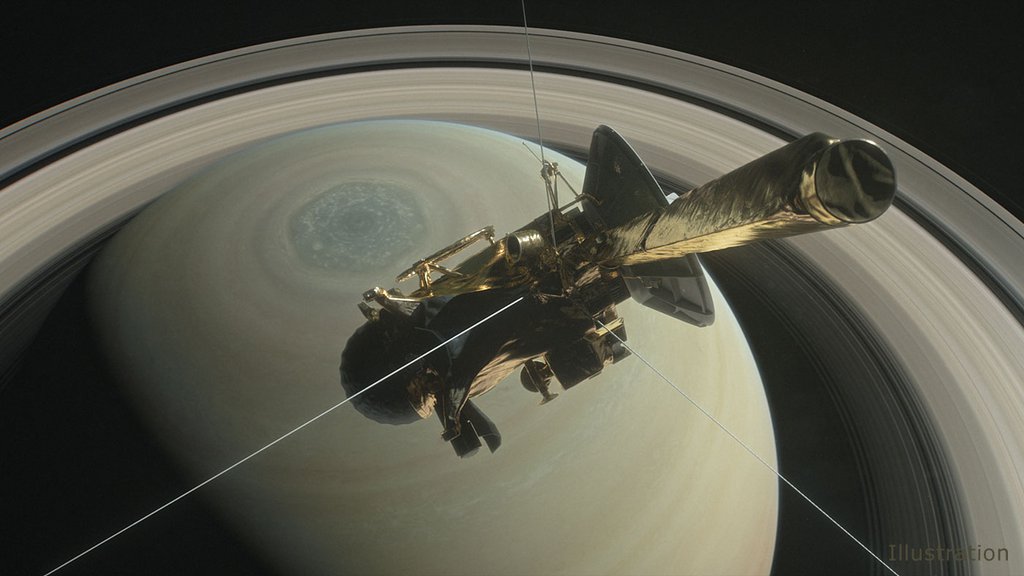 This artist's rendering shows NASA's Cassini spacecraft above Saturn's northern hemisphere, heading toward its first dive between Saturn and its rings on April 26, 2017.
Credit: NASA/JPL-Caltech

NASA's Cassini spacecraft is set to make its first dive through the narrow gap between Saturn and its rings on April 26, 2017.

NASA's Cassini spacecraft is set to make its first dive through the narrow gap between Saturn and its rings on April 26, 2017. Because that gap is a region no spacecraft has ever explored, Cassini will use its dish-shaped high-gain antenna (13 feet or 4 meters across) as a protective shield while passing through the ring plane. No particles larger than smoke particles are expected, but the precautionary measure is being taken on the first dive. The Cassini team will use data collected by one of the spacecraft's science instruments (the Radio and Plasma Wave Subsystem, or RPWS) to ascertain the size and density of ring particles in the gap in advance of future dives. As a result of its antenna-forward orientation, the spacecraft will be out of contact with Earth during the dive.

Below is a list of milestones expected to occur during the event, if all goes as planned:

-- 5 p.m. PDT (8 p.m. EDT) on April 25: Cassini is approaching Saturn over the planet's northern hemisphere in advance of its first of 22 planned dives through the gap between the planet and its rings.

-- 1:34 a.m. PDT (4:34 a.m. EDT) on April 26: As it passes from north to south over Saturn, Cassini begins a 14-minute turn to point its high-gain antenna into the direction of oncoming ring particles. In this orientation, the antenna acts as a protective shield for Cassini's instruments and engineering systems.

-- 2 a.m. PDT (5 a.m. EDT) on April 26: Cassini crosses the ring plane during its dive between the rings and Saturn. The spacecraft's science instruments are collecting data, but Cassini is not in contact with Earth at this time.

-- No earlier than around midnight PDT on April 26 (3 a.m. EDT on April 27): Earth has its first opportunity to regain contact with Cassini as the giant, 230-foot (70-meter) Deep Space Network antenna at Goldstone, California, listens for the spacecraft's radio signal.

As Cassini engineers monitor the status of the spacecraft, updates to these milestones will be added at:

Updates will also be posted on social media at:

https://www.jpl.nasa.gov/edu/news/2017/4/25/a-moment-you-wont-want-to-miss-cassinis-daring-mission-finale-between-the-rings-and-saturn/
Teachable Moment: Cassini's Daring Mission Finale Between the Rings and Saturn
› Check it out