Cassini's Big Sky: The View from the Center of Our Solar System 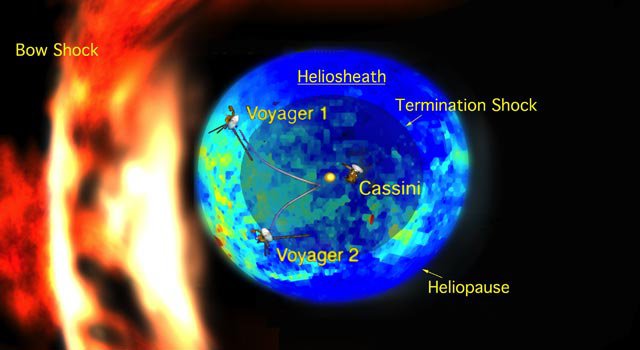 In this illustration, the multicolored (blue and green) bubble represents the new measurements of the emission of particles known as energetic neutral atoms.› Full image and caption
Credit: NASA/JPL/JHUAPL 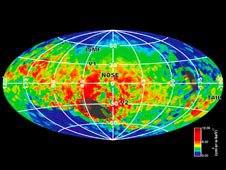 NASA's Cassini spacecraft created this image of the bubble around our solar system based on emissions of particles known as energetic neutral atoms.› Full image and caption
Credit: NASA/JPL/JHUAPL

But Cassini recently revealed new data that appeared to overturn the decades-old belief that our solar system resembled a comet in shape as it moves through the interstellar medium (the matter between stars in our corner of the Milky Way galaxy).

Instead, the new results suggest our heliosphere more closely resembles a bubble - or a rat - being eaten by a boa constrictor: as the solar system passes through the "belly" of the snake, the ribs, which mimic the local interstellar magnetic field, expand and contract as the rat passes. An animation is available here.

"At first I was incredulous," said Tom Krimigis, principal investigator of the Magnetospheric Imaging Instrument (MIMI) at Johns Hopkins University's Applied Physics Laboratory in Laurel, Md. "The first thing I thought was, 'What's wrong with our data?'"

Krimigis and his colleagues on the instrument team published the Cassini findings in the Nov. 13 issue of the journal Science, which featured complementary results from NASA's Interstellar Boundary Explorer (IBEX). Together, the results create the first map of the heliosphere and its thick outer layer known as the heliosheath, where solar wind streaming out from the sun gets heated and slowed as it interacts with the interstellar medium.

The Cassini data also provide a much more direct indication of the thickness of the heliosheath, whereas scientists previously had to rely on calculations from models. The new results from Cassini show that the heliosheath is about 40 to 50 astronomical units (3.7 billion to 4.7 billion miles) thick and that NASA's twin Voyager spacecraft, which are traveling through the heliosheath now, will cross into true interstellar space well before the year 2020. Estimates as far out as 2030 had been suggested.

"These new data from Cassini really redefine our sense of our home in the galaxy, and we can now do better studies of whether our solar system resembles those elsewhere," Krimigis said.

The Voyagers have sent back rich data on the heliosphere and heliosheath, but just at two locations. Scientists want more context. One way to learn about the region is to track energetic neutral atoms streaming back toward the sun from the heliosheath.

Energetic neutral atoms form when cold, neutral gas collides with electrically-charged particles in a cloud of plasma, which is a gas-like state of matter so hot that the atoms split into an ion and an electron. The positively-charged ions in plasma can't reclaim their own electrons, which are moving too fast, but they can steal an electron from the cold gas atoms. Since the resulting particles are neutrally charged, they are able to escape magnetic fields and zoom off into space. The emission of these particles often occurs in the magnetic fields surrounding planets, but also happens when the solar wind mingles with the interstellar medium.

How did Cassini, with 22,000 wire connections and 14 kilometers (8.7 miles) of cabling specifically tweaked to get the most out of its investigation of the solar system's second largest gas bag, recently end up helping to redefine how we look at our entire solar system?

Krimigis and his Cassini colleagues working with MIMI weren't sure their instrument could pick up emissions from far-out, exotic locations, such as from the boundary of our heliosphere, the region of our sun's influence.

Last year, after spending four years focused on the energetic electrons and ions trapped in the magnetic field that surrounds Saturn, as well as the offspring of these particles known as energetic neutral atoms, the team started combing through the data from the instrument's Ion and Neutral Camera, looking for particles arriving from far beyond Saturn.

"We thought we could get some hits from energetic neutral atoms from the heliosheath because Cassini has really been in an excellent position to detect these particles," said Don Mitchell, MIMI instrument scientist and a researcher at the Applied Physics Laboratory.

Cassini was farther away from the sun than previous spacecraft trying to image the heliosphere and even swung very far away from Saturn on some of its orbits, Mitchell said. The data would likely be free of much of the interference that hampered other efforts.

Mitchell, Krimigis and their team were able to stitch together data from late 2003 to the summer of 2009. They created a color-coded map of the intensity of the energetic neutral atoms and discovered a belt of hot, high-pressure particles where the interstellar wind flowed by our heliosheath bubble.

"I was initially skeptical because the instrument was designed for Saturn's magnetosphere," Mitchell said, "But our camera had long exposures of months to years, so we could accumulate and map each particle that streamed through the tiny aperture from the far reaches of the heliosphere. It was luck, but also a lot of hard work."

The Cassini-Huygens mission is a cooperative project of NASA, the European Space Agency and the Italian Space Agency. NASA's Jet Propulsion Laboratory, a division of the California Institute of Technology in Pasadena, Calif. manages the mission for NASA's Science Mission Directorate, Washington, D.C.