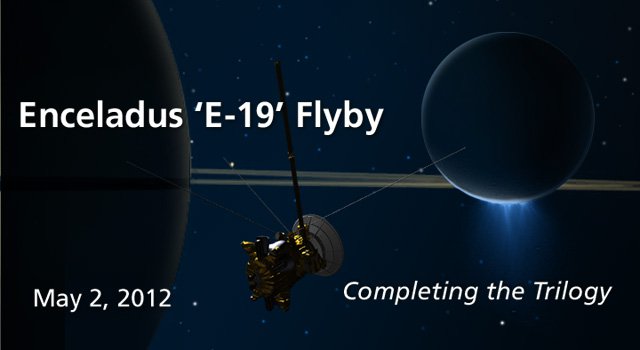 NASA's Cassini spacecraft will be making a close flyby of Saturn's icy moon Enceladus on May 2.

NASA's Cassini spacecraft will be flying within about 46 miles (74 kilometers) of Saturn's moon Enceladus on Wednesday, May 2, aiming primarily to learn more about the moon's internal structure. The flyby is the third part of a trilogy of flybys -- the other two took place on April 28, 2010, and Nov. 30, 2010 -- for Cassini's radio science experiment. The radio science team is particularly interested in learning how mass is distributed under Enceladus' south polar region, which features jets of water ice, water vapor and organic compounds spraying out of long fractures. A concentration of mass in that region could indicate subsurface liquid water or an intrusion of warmer-than-average ice that might explain the unusual plume activity. Cassini's scientists learn about the moon's internal structure by measuring variations in the gravitational pull of Enceladus against the steady radio link to NASA's Deep Space Network on Earth.

Cassini's composite infrared spectrometer instrument will also be observing the side of Enceladus that always faces away from Saturn to monitor for hot spots. The imaging camera team also plans to take images of the plume to look for variability in the jets.

Cassini will also be flying by Dione at a distance of about 5,000 miles (8,000 kilometers), enabling the imaging cameras to create several mosaic images of the icy moon, and the composite infrared spectrometer to monitor heat emission.

More information about the flyby is available at: http://saturn.jpl.nasa.gov/mission/flybys/enceladus20120502/ .
The Cassini-Huygens mission is a cooperative project of NASA, the European Space Agency and the Italian Space Agency. The Jet Propulsion Laboratory, a division of the California Institute of Technology in Pasadena, manages the Cassini-Huygens mission for NASA's Science Mission Directorate in Washington. The Cassini orbiter was designed, developed and assembled at JPL.

More information about the Cassini-Huygens mission is at:
http://www.nasa.gov/cassini and http://saturn.jpl.nasa.gov .