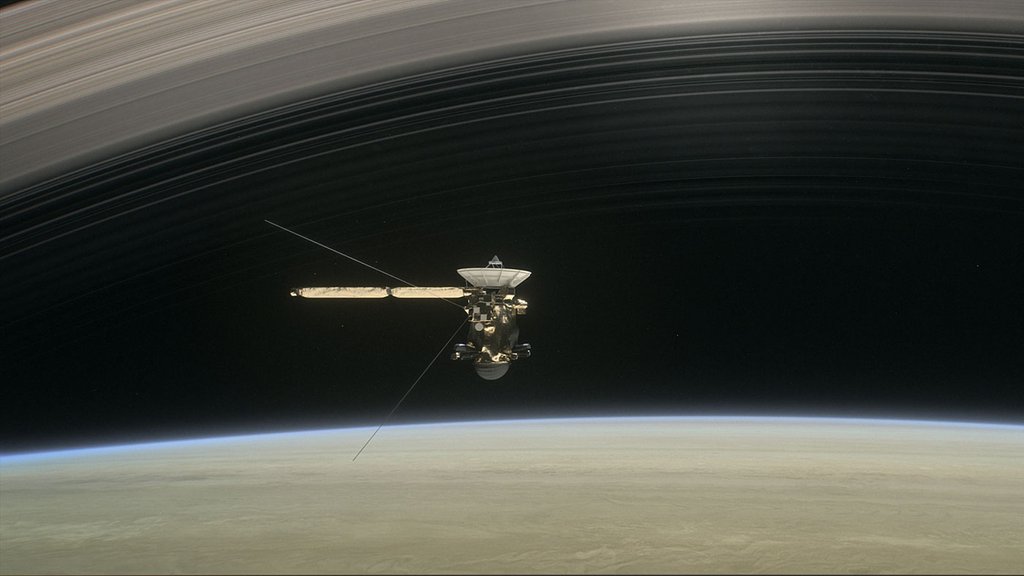 This artist's rendering shows Cassini as the spacecraft makes one of its final five dives through Saturn's upper atmosphere in August and September 2017.
Credit: NASA/JPL-Caltech

NASA's Cassini spacecraft is about to embark on a set of ultra-close passes through Saturn's upper atmosphere with its final five orbits around the planet.

NASA's Cassini spacecraft will enter new territory in its final mission phase, the Grand Finale, as it prepares to embark on a set of ultra-close passes through Saturn's upper atmosphere with its final five orbits around the planet.

The spacecraft is expected to encounter atmosphere dense enough to require the use of its small rocket thrusters to maintain stability -- conditions similar to those encountered during many of Cassini's close flybys of Saturn's moon Titan, which has its own dense atmosphere. 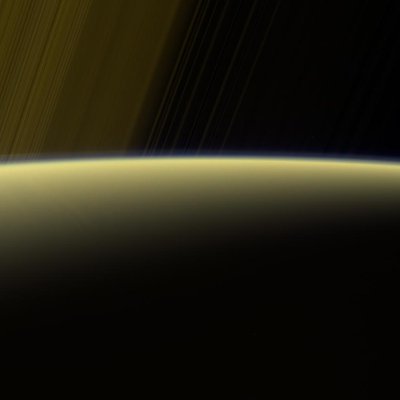 This view from Cassini shows the narrow band of Saturn's atmosphere, which Cassini will dive through five times before making its final plunge into the planet on Sept. 15. Credit: NASA/JPL-Caltech
› Larger image

"Cassini's Titan flybys prepared us for these rapid passes through Saturn's upper atmosphere," said Earl Maize, Cassini project manager at NASA's Jet Propulsion Laboratory in Pasadena, California. "Thanks to our past experience, the team is confident that we understand how the spacecraft will behave at the atmospheric densities our models predict."

Maize said the team will consider the Aug. 14 pass nominal if the thrusters operate between 10 and 60 percent of their capability. If the thrusters are forced to work harder -- meaning the atmosphere is denser than models predict -- engineers will increase the altitude of subsequent orbits. Referred to as a "pop-up maneuver," thrusters will be used to raise the altitude of closest approach on the next passes, likely by about 120 miles (200 kilometers).

If the pop-up maneuver is not needed, and the atmosphere is less dense than expected during the first three passes, engineers may alternately use the "pop-down" option to lower the closest approach altitude of the last two orbits, also likely by about 120 miles (200 kilometers). Doing so would enable Cassini's science instruments, especially the ion and neutral mass spectrometer (INMS), to obtain data on the atmosphere even closer to the planet's cloud tops.

"As it makes these five dips into Saturn, followed by its final plunge, Cassini will become the first Saturn atmospheric probe," said Linda Spilker, Cassini project scientist at JPL. "It's long been a goal in planetary exploration to send a dedicated probe into the atmosphere of Saturn, and we're laying the groundwork for future exploration with this first foray."

Other Cassini instruments will make detailed, high-resolution observations of Saturn's auroras, temperature, and the vortexes at the planet's poles. Its radar will peer deep into the atmosphere to reveal small-scale features as fine as 16 miles (25 kilometers) wide -- nearly 100 times smaller than the spacecraft could observe prior to the Grand Finale.

On Sept. 11, a distant encounter with Titan will serve as a gravitational version of a large pop-down maneuver, slowing Cassini's orbit around Saturn and bending its path slightly to send the spacecraft toward its Sept. 15 plunge into the planet.

During the half-orbit plunge, the plan is to have seven Cassini science instruments, including INMS, turned on and reporting measurements in near real time. The spacecraft is expected to reach an altitude where atmospheric density is about twice what it encountered during its final five passes. Once Cassini reaches that point, its thrusters will no longer be able to work against the push of Saturn's atmosphere to keep the spacecraft's antenna pointed toward Earth, and contact will permanently be lost. The spacecraft will break up like a meteor moments later, ending its long and rewarding journey.