Cassini Swings Above Saturn to Compose a Portrait 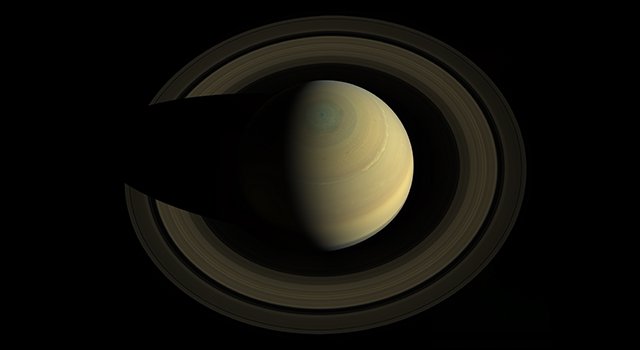 A swing high above Saturn by NASA's Cassini spacecraft revealed this stately view of the golden-hued planet and its main rings. The view is in natural color, as human eyes would have seen it.› Full image and caption
Credit: NASA/JPL-Caltech/SSI/Cornell

On a loop high above Saturn, NASA's Cassini spacecraft captured a stately view of a golden Saturn and its rings.

It's a view as good as gold. A loop high above Saturn by NASA's Cassini spacecraft revealed this stately view of the golden-hued planet and its main rings. The observation and resulting image mosaic were planned as one of three images for Cassini's 2013 Scientist for a Day essay contest. The contest challenges students to study three possible targets and write about which one they think will yield the best science. Today is the last day for U.S. submissions and the Cassini mission has already started working on picking the best essays.

This natural-color view -- seen as human eyes would have seen it - was obtained on Oct. 10, 2013. It shows off the differently colored bands of weather at Saturn. A bright, wavy stream of clouds around 42 degrees north latitude appears to mark some of the turbulent aftermath of a giant storm that reached its violent peak in early 2011. The mysterious six-sided weather pattern known as the hexagon is also visible around Saturn's north pole.

Cassini is currently in a special set of tilted orbits known as "inclined orbits" that allow the spacecraft to swing up over the north pole and below the south pole. Cassini was tilted as much as 62 degrees from the plane of Saturn's equator in April of this year and will continue to work its way back down again till early 2015. Much of Cassini's tour has involved orbits around the equatorial plane, where most of Saturn's rings and moons are located.

For more information about Cassini and its mission, visit: http://www.nasa.gov/cassini and http://saturn.jpl.nasa.gov.