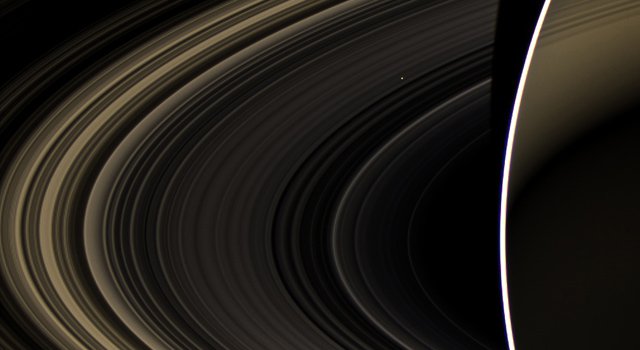 Peering over the shoulder of giant Saturn, through its rings, and across interplanetary space, NASA's Cassini spacecraft spies the bright, cloudy terrestrial planet, Venus. The vast distance from Saturn means that Venus only shows up as a white dot, just above and to the right of the image center.› Full image and caption
Credit: NASA/JPL-Caltech/Space Science Institute 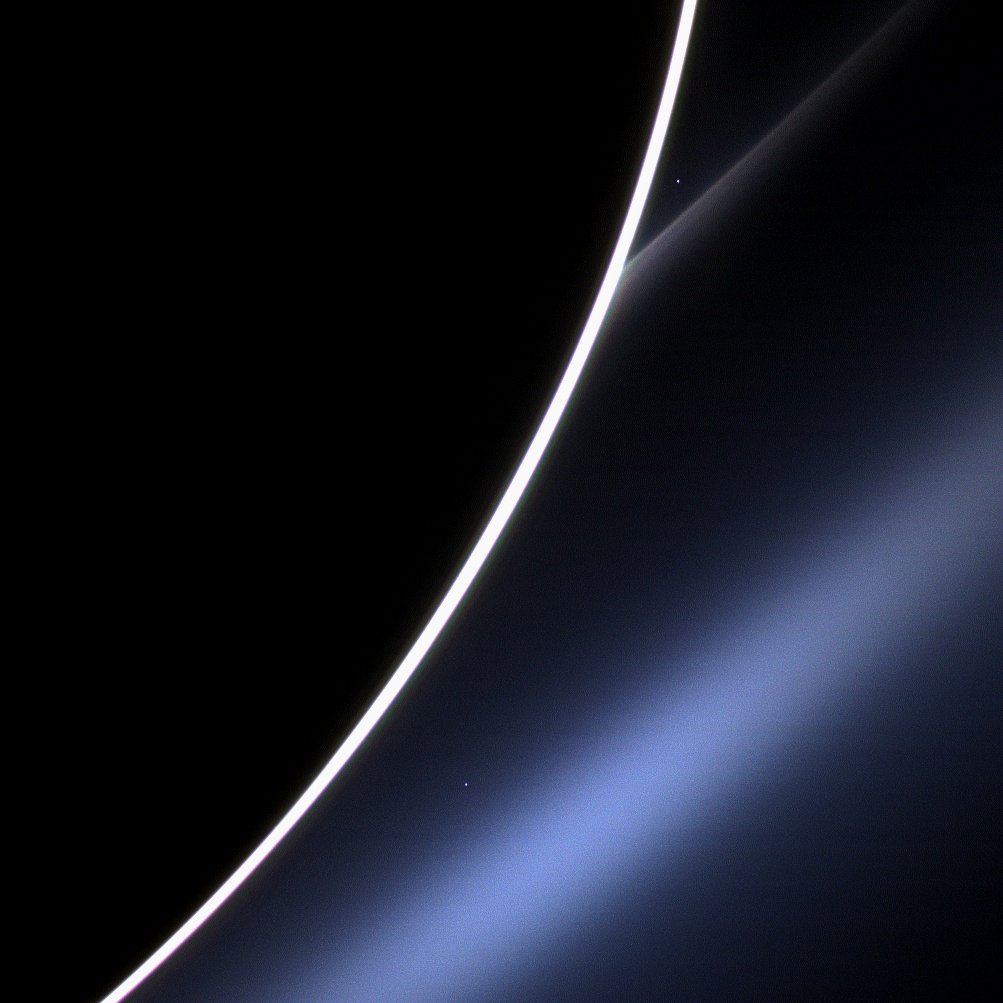 Dawn on Saturn is greeted across the vastness of interplanetary space by the morning star, Venus, in this image from NASA's Cassini spacecraft. Venus appears just off the edge of the planet, in the upper part of the image, directly above the white streak of Saturn's G ring. Lower down, Saturn's E ring makes an appearance, looking blue thanks to the scattering properties of the dust that comprises the ring. A bright spot near the E ring is a distant star.› Full image and caption
Credit: NASA/JPL-Caltech/Space Science Institute

A distant world gleaming in sunlight, Earth's twin planet, Venus, shines like a bright beacon in images taken by NASA's Cassini spacecraft in orbit around Saturn.

One special image of Venus and Saturn was taken last November when Cassini was placed in the shadow of Saturn. This allowed Cassini to look in the direction of the sun and Venus, and take a backlit image of Saturn and its rings in a particular viewing geometry called "high solar phase." This observing position reveals details about the rings and Saturn's atmosphere that cannot be seen in lower solar phase.

One of the Venus and Saturn images being released today is a combination of separate red, green and blue images covering the planet and main rings and processed to produce true color. Last December, a false-color version of the mosaic was released.

Another image, taken in January, captures Venus just beyond the limb of Saturn and in close proximity to Saturn's G ring, a thin ring just beyond the main Saturnian rings. The diffuse E ring, which is outside the G ring and created by the spray of the moon Enceladus, also is visible.

Venus is, along with Mercury, Earth and Mars, one of the rocky "terrestrial" planets in the solar system that orbit relatively close to the sun. Though Venus has an atmosphere of carbon dioxide that reaches nearly 900 degrees Fahrenheit (500 degrees Celsius) and a surface pressure 100 times that of Earth's, it is considered a twin to our planet because of their similar sizes, masses, rocky compositions and close orbits. It is covered in thick sulfuric acid clouds, making it very bright.