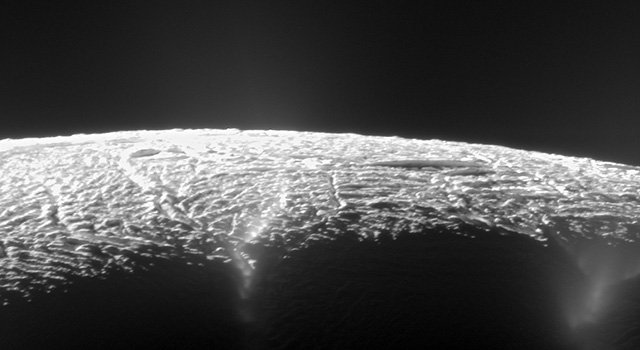 This view looks across the geyser basin of Saturn's moon Enceladus, along fractures spewing water vapor and ice particles into space. Cassini scientists have pinpointed the source locations of about 100 geysers and gained new insights into what powers them.› Full image and caption
Credit: NASA/JPL-Caltech/SSI 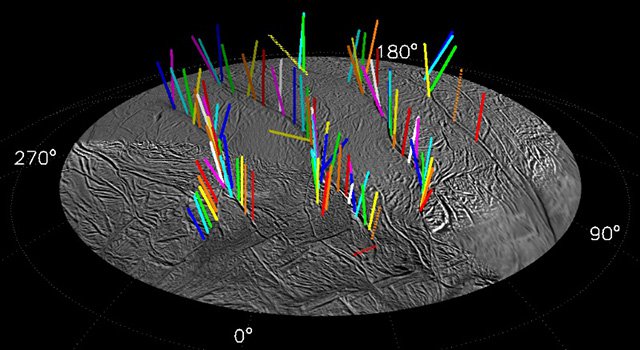 This graphic shows a 3-D model of 98 geysers whose source locations and tilts were found in a Cassini imaging survey of Enceladus' south polar terrain by the method of triangulation.› Full image and caption
Credit: NASA/JPL-Caltech/Space Science Institute 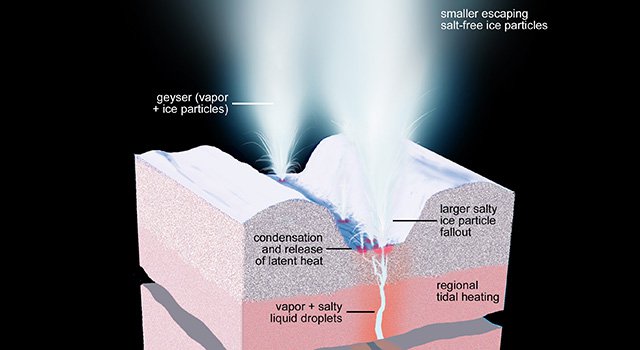 This artist's rendering shows a cross-section of the ice shell immediately beneath one of Enceladus' geyser-active fractures, illustrating the physical and thermal structure and the processes ongoing below and at the surface.› Full image and caption
Credit: NASA/JPL-Caltech/Space Science Institute

Scientists using mission data from NASA's Cassini spacecraft have identified 101 distinct geysers erupting on Saturn's icy moon Enceladus. Their analysis suggests it is possible for liquid water to reach from the moon's underground sea all the way to its surface.

These findings, and clues to what powers the geyser eruptions, are presented in two articles published in the current online edition of the Astronomical Journal.

Over a period of almost seven years, Cassini's cameras surveyed the south polar terrain of the small moon, a unique geological basin renowned for its four prominent "tiger stripe" fractures and the geysers of tiny icy particles and water vapor first sighted there nearly 10 years ago. The result of the survey is a map of 101 geysers, each erupting from one of the tiger stripe fractures, and the discovery that individual geysers are coincident with small hot spots. These relationships pointed the way to the geysers' origin.

After the first sighting of the geysers in 2005, scientists suspected that repeated flexing of Enceladus by Saturn's tides as the moon orbits the planet had something to do with their behavior. One suggestion included the back-and-forth rubbing of opposing walls of the fractures generating frictional heat that turned ice into geyser-forming vapor and liquid.

Alternate views held that the opening and closing of the fractures allowed water vapor from below to reach the surface. Before this new study, it was not clear which process was the dominating influence. Nor was it certain whether excess heat emitted by Enceladus was everywhere correlated with geyser activity.

To determine the surface locations of the geysers, researchers employed the same process of triangulation used historically to survey geological features on Earth, such as mountains. When the researchers compared the geysers' locations with low-resolution maps of thermal emission, it became apparent the greatest geyser activity coincided with the greatest thermal radiation. Comparisons between the geysers and tidal stresses revealed similar connections. However, these correlations alone were insufficient to answer the question, "What produces what?"

The answer to this mystery came from comparison of the survey results with high-resolution data collected in 2010 by Cassini's heat-sensing instruments. Individual geysers were found to coincide with small-scale hot spots, only a few dozen feet (or tens of meters) across, which were too small to be produced by frictional heating, but the right size to be the result of condensation of vapor on the near-surface walls of the fractures. This immediately implicated the hot spots as the signature of the geysering process.

"Once we had these results in hand, we knew right away heat was not causing the geysers, but vice versa," said Carolyn Porco, leader of the Cassini imaging team from the Space Science Institute in Boulder, Colorado, and lead author of the first paper. "It also told us the geysers are not a near-surface phenomenon, but have much deeper roots."

Thanks to recent analysis of Cassini gravity data, the researchers concluded the only plausible source of the material forming the geysers is the sea now known to exist beneath the ice shell. They also found that narrow pathways through the ice shell can remain open from the sea all the way to the surface, if filled with liquid water.

In the companion paper, the authors report the brightness of the plume formed by all the geysers, as seen with Cassini's high-resolution cameras, changes periodically as Enceladus orbits Saturn. Armed with the conclusion that the opening and closing of the fractures modulates the venting, the authors compared the observations with the expected venting schedule due to tides.

They found the simplest model of tidal flexing provides a good match for the brightness variations Cassini observes, but it does not predict the time when the plume begins to brighten. Some other important effect is present and the authors considered several in the course of their work.

The Cassini-Huygens mission is a cooperative project of NASA, the European Space Agency and the Italian Space Agency. The Jet Propulsion Laboratory (JPL) in Pasadena, California, manages the mission for NASA's Science Mission Directorate in Washington. The Cassini orbiter and its two onboard cameras were designed, developed and assembled at JPL. The imaging team consists of scientists from the United States, England, France and Germany. The imaging team is based at the Space Science Institute.

Additional details, images and an animation are available at: