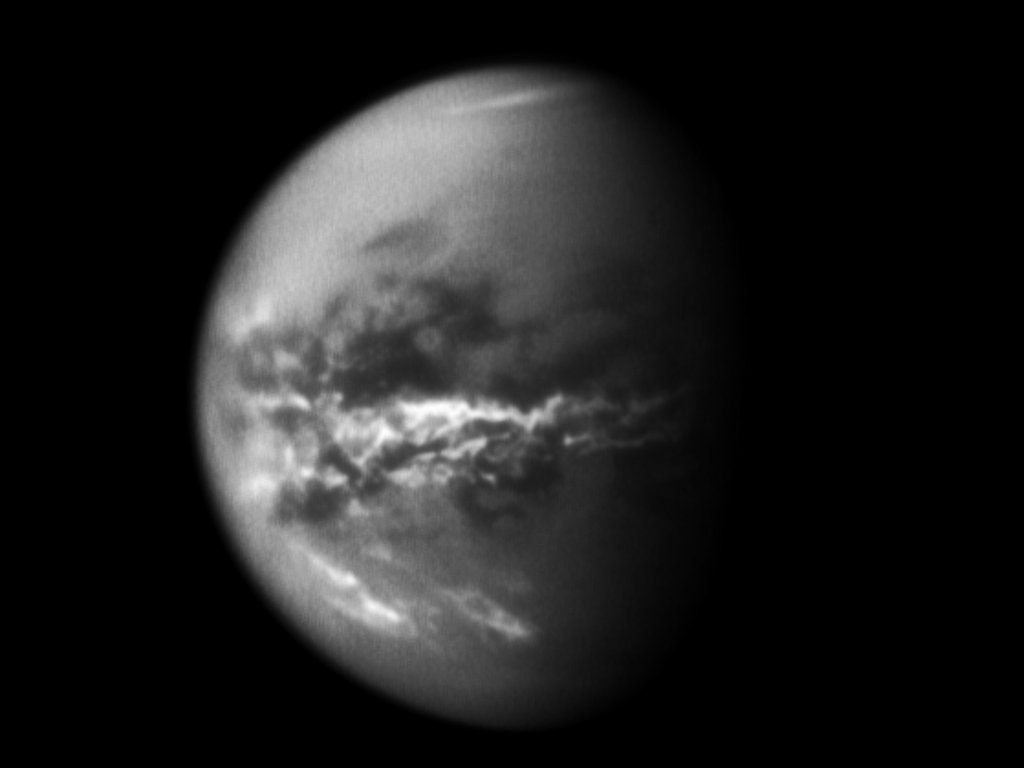 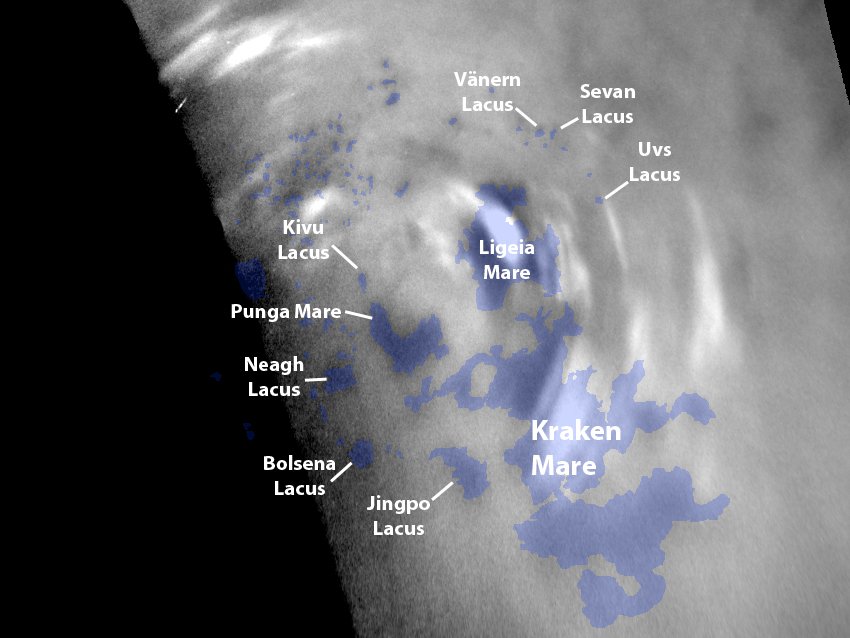 Clouds move above the large methane lakes and seas near the north pole of Saturn's moon Titan in this movie made from images taken by NASA's Cassini spacecraft.› Play video
Credit: NASA/JPL/SSI 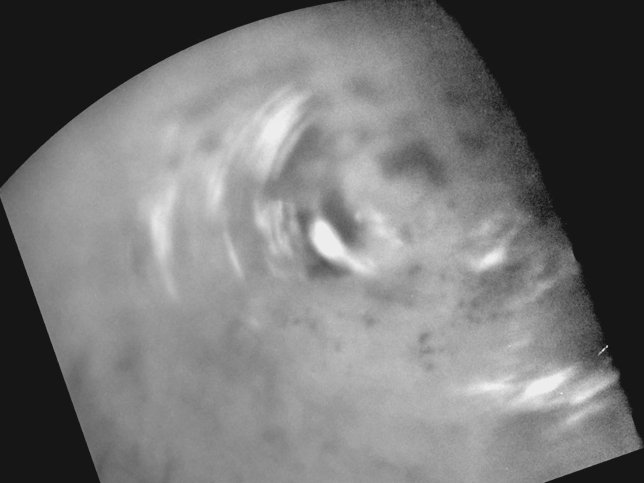 Clouds move above Titan's large methane lakes and seas near the moon's north pole in this movie made from images taken by NASA's Cassini spacecraft.› Play video
Credit: NASA/JPL/SSI 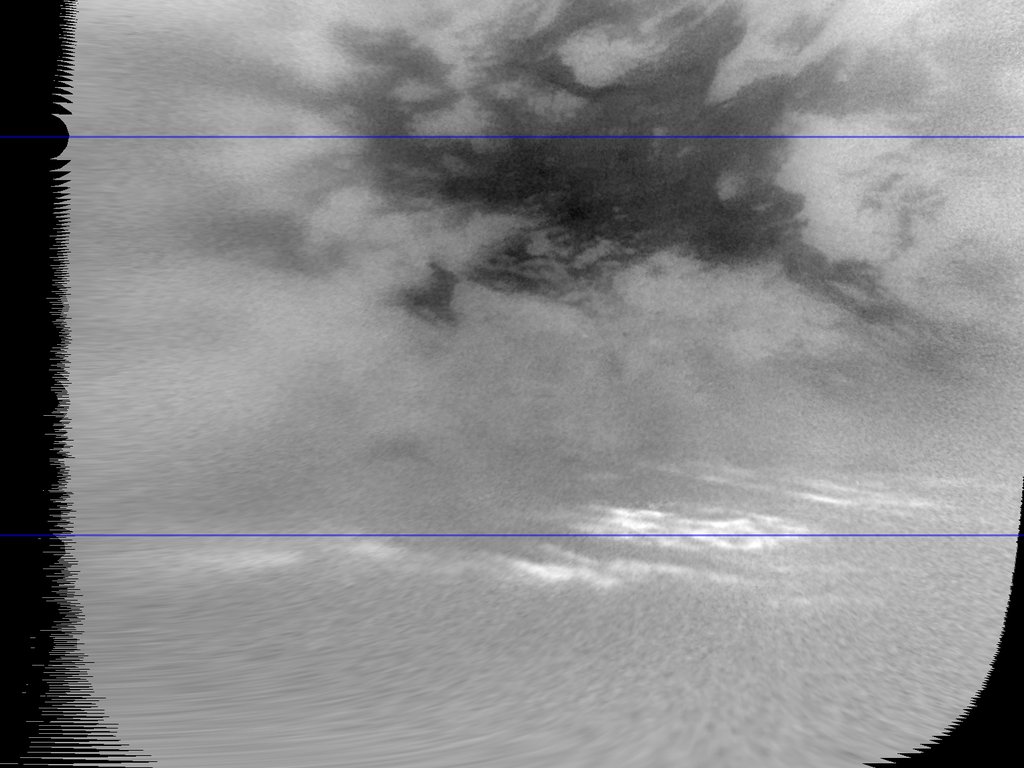 This movie shows clouds in the mid-southern latitudes of Saturn's largest moon, Titan, in a series of images captured by NASA's Cassini spacecraft a few months after fall began in the southern hemisphere.› Play video
Credit: NASA/JPL/SSI 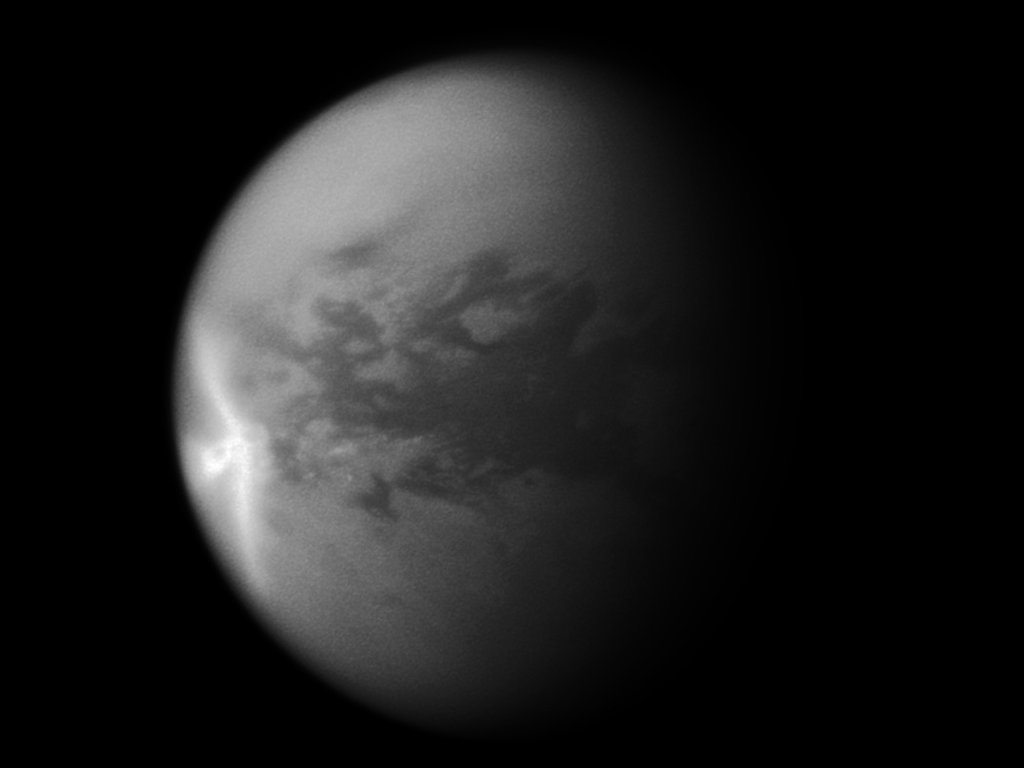 A huge arrow-shaped storm blows across the equatorial region of Titan in this image from NASA's Cassini spacecraft, chronicling the seasonal weather changes on Saturn's largest moon.› Full image and caption
Credit: NASA/JPL/SSI 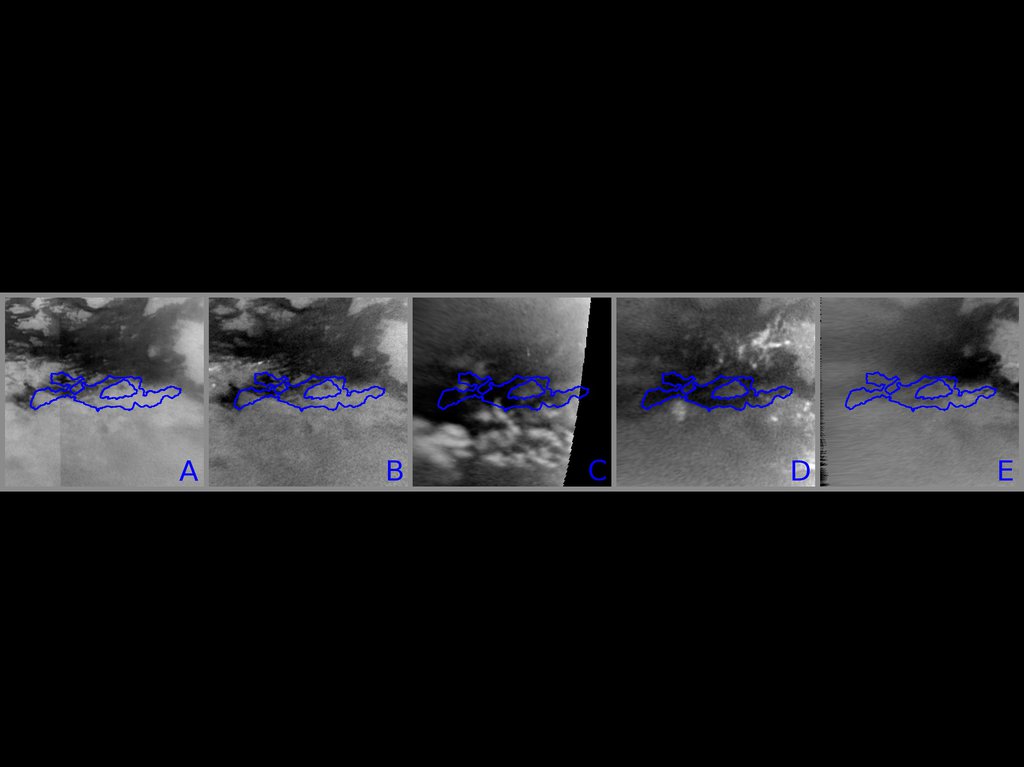 This series of images from NASA's Cassini spacecraft shows changes on the surface of Saturn's moon Titan, as the transition to northern spring brings methane rains to the moon's equatorial latitudes.› Full image and caption
Credit: NASA/JPL/SSI

As spring continues to unfold at Saturn, April showers on the planet's largest moon, Titan, have brought methane rain to its equatorial deserts, as revealed by Cassini.

PASADENA, Calif. -- As spring continues to unfold at Saturn, April showers on the planet's largest moon, Titan, have brought methane rain to its equatorial deserts, as revealed in images captured by NASA's Cassini spacecraft. This is the first time scientists have obtained current evidence of rain soaking Titan's surface at low latitudes.

Extensive rain from large cloud systems, spotted by Cassini's cameras in late 2010, has apparently darkened the surface of the moon. The best explanation is these areas remained wet after methane rainstorms. The observations released today in the journal Science, combined with earlier results in Geophysical Research Letters last month, show the weather systems of Titan's thick atmosphere and the changes wrought on its surface are affected by the changing seasons.

"It's amazing to be watching such familiar activity as rainstorms and seasonal changes in weather patterns on a distant, icy satellite," said Elizabeth Turtle, a Cassini imaging team associate at the Johns Hopkins University Applied Physics Lab in Laurel, Md., and lead author of today's publication. "These observations are helping us to understand how Titan works as a system, as well as similar processes on our own planet."

The Saturn system experienced equinox, when the sun lies directly over a planet's equator and seasons change, in August 2009. (A full Saturn "year" is almost 30 Earth years.) Years of Cassini observations suggest Titan's global atmospheric circulation pattern responds to the changes in solar illumination, influenced by the atmosphere and the surface, as detailed in the Geophysical Research Letters paper. Cassini found the surface temperature responds more rapidly to sunlight changes than does the thick atmosphere. The changing circulation pattern produced clouds in Titan's equatorial region.

Clouds on Titan are formed of methane as part of an Earth-like cycle that uses methane instead of water. On Titan, methane fills lakes on the surface, saturates clouds in the atmosphere, and falls as rain. Though there is evidence that liquids have flowed on the surface at Titan's equator in the past, liquid hydrocarbons, such as methane and ethane, had only been observed on the surface in lakes at polar latitudes. The vast expanses of dunes that dominate Titan's equatorial regions require a predominantly arid climate. Scientists suspected that clouds might appear at Titan's equatorial latitudes as spring in the northern hemisphere progressed. But they were not sure if dry channels previously observed were cut by seasonal rains or remained from an earlier, wetter climate.

An arrow-shaped storm appeared in the equatorial regions on Sept. 27, 2010 -- the equivalent of early April in Titan's "year" -- and a broad band of clouds appeared the next month. As described in the Science paper, over the next few months, Cassini's imaging science subsystem captured short-lived surface changes visible in images of Titan's surface. A 193,000-square-mile (500,000-square-kilometer) region along the southern boundary of Titan's Belet dune field, as well as smaller areas nearby, had become darker. Scientists compared the imaging data to data obtained by other instruments and ruled out other possible causes for surface changes. They concluded this change in brightness is most likely the result of surface wetting by methane rain.

These observations suggest that recent weather on Titan is similar to that over Earth's tropics. In tropical regions, Earth receives its most direct sunlight, creating a band of rising motion and rain clouds that encircle the planet.

"These outbreaks may be the Titan equivalent of what creates Earth's tropical rainforest climates, even though the delayed reaction to the change of seasons and the apparently sudden shift is more reminiscent of Earth's behavior over the tropical oceans than over tropical land areas," said Tony Del Genio of NASA's Goddard Institute for Space Studies, New York, a co-author and a member of the Cassini imaging team.

On Earth, the tropical bands of rain clouds shift slightly with the seasons but are present within the tropics year-round. On Titan, such extensive bands of clouds may only be prevalent in the tropics near the equinoxes and move to much higher latitudes as the planet approaches the solstices. The imaging team intends to watch whether Titan evolves in this fashion as the seasons progress from spring toward northern summer.

"It is patently clear that there is so much more to learn from Cassini about seasonal forcing of a complex surface-atmosphere system like Titan's and, in turn, how it is similar to, or differs from, the Earth's," said Carolyn Porco, Cassini imaging team lead at the Space Science Institute, Boulder, Colo. "We are eager to see what the rest of Cassini's Solstice Mission will bring."