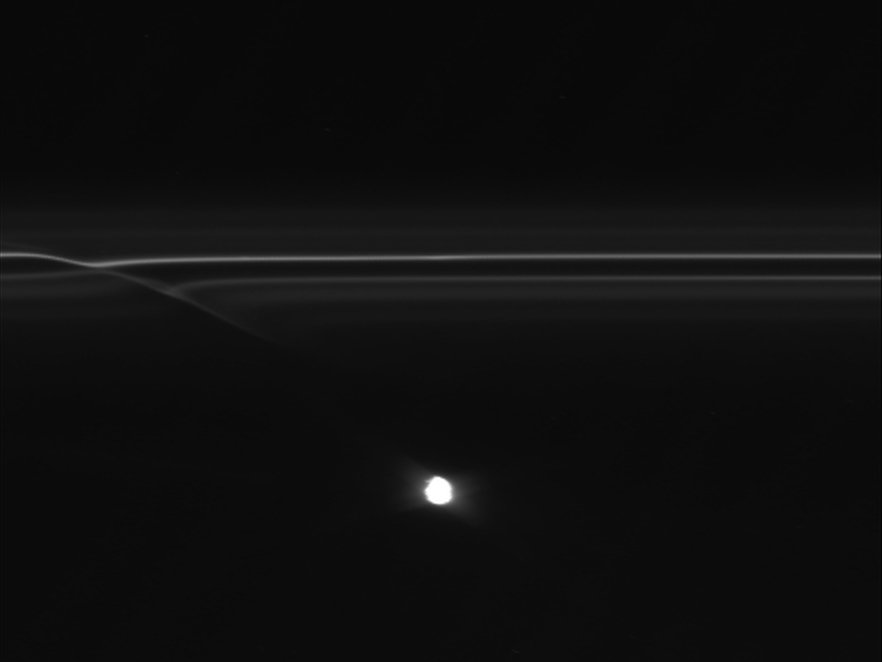 Images from NASA's Cassini spacecraft have revealed half-mile-sized (kilometer-sized) objects punching through parts of Saturn's F ring, leaving glittering trails behind them. These trails in the rings, which scientists are calling "mini-jets," fill in a missing link in our story of the curious behavior of the F ring. 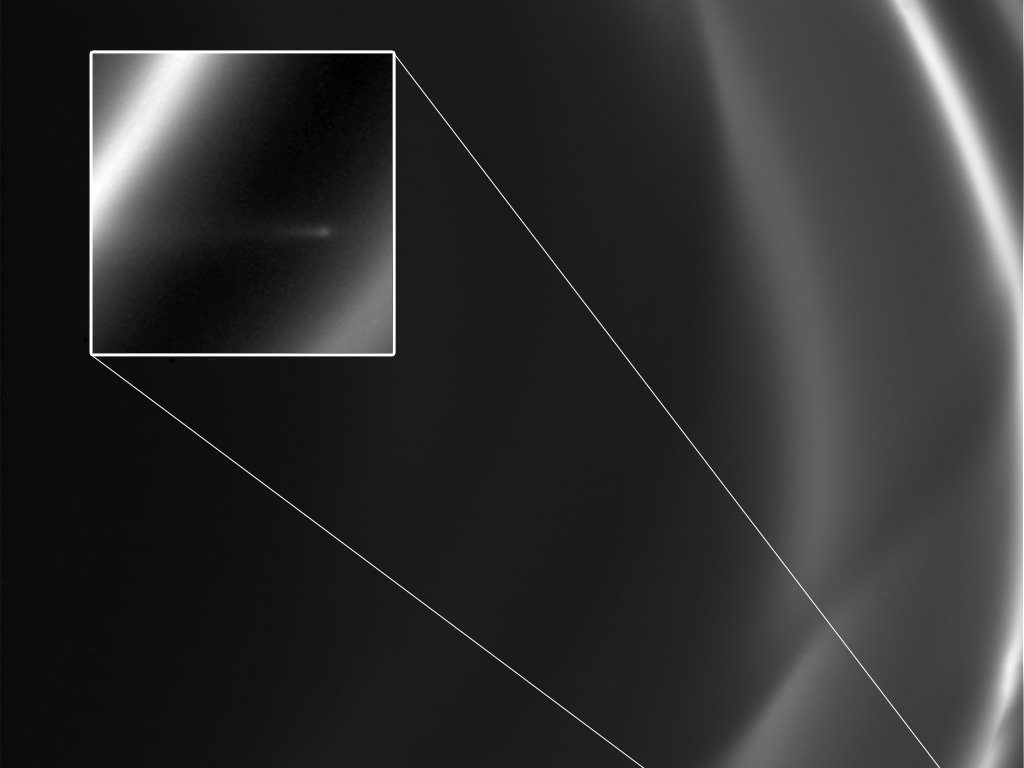 This image obtained by NASA's Cassini spacecraft around the time it went into orbit around Saturn in 2004 shows a short trail of icy particles dragged out from Saturn's F ring.› Full image and caption
Credit: NASA/JPL-Caltech/SSI/QMUL 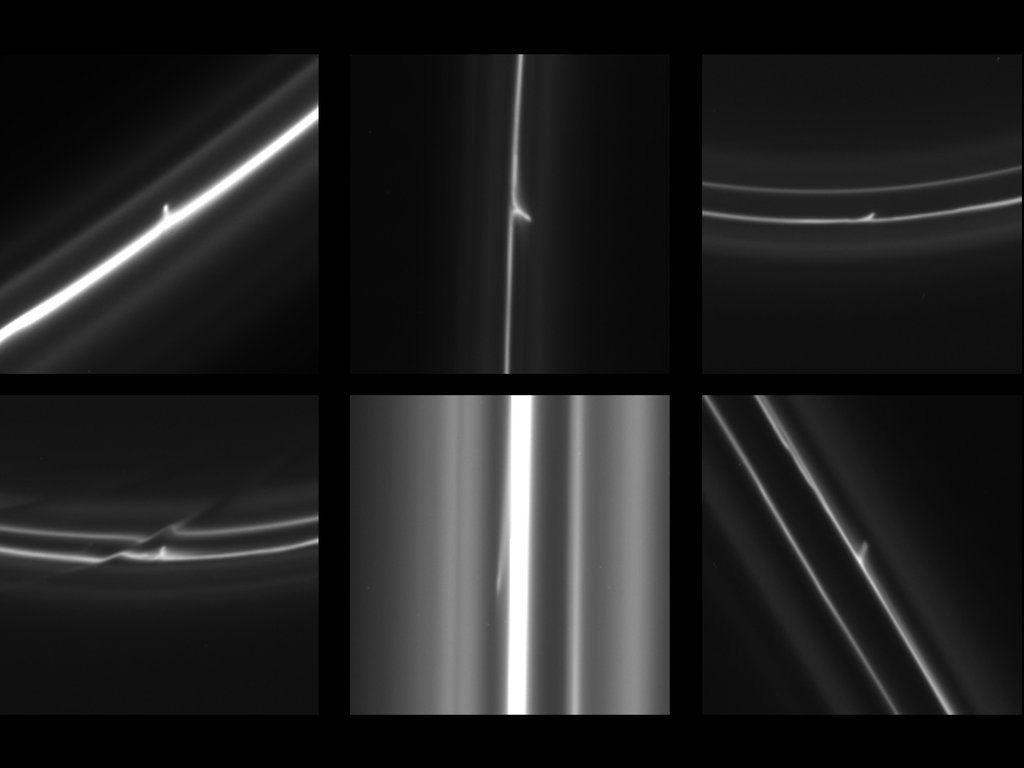 This set of six images obtained by NASA's Cassini spacecraft shows trails that were dragged out from Saturn's F ring by objects about a half mile (1 kilometer) in diameter.› Full image and caption
Credit: NASA/JPL-Caltech/SSI/QMUL 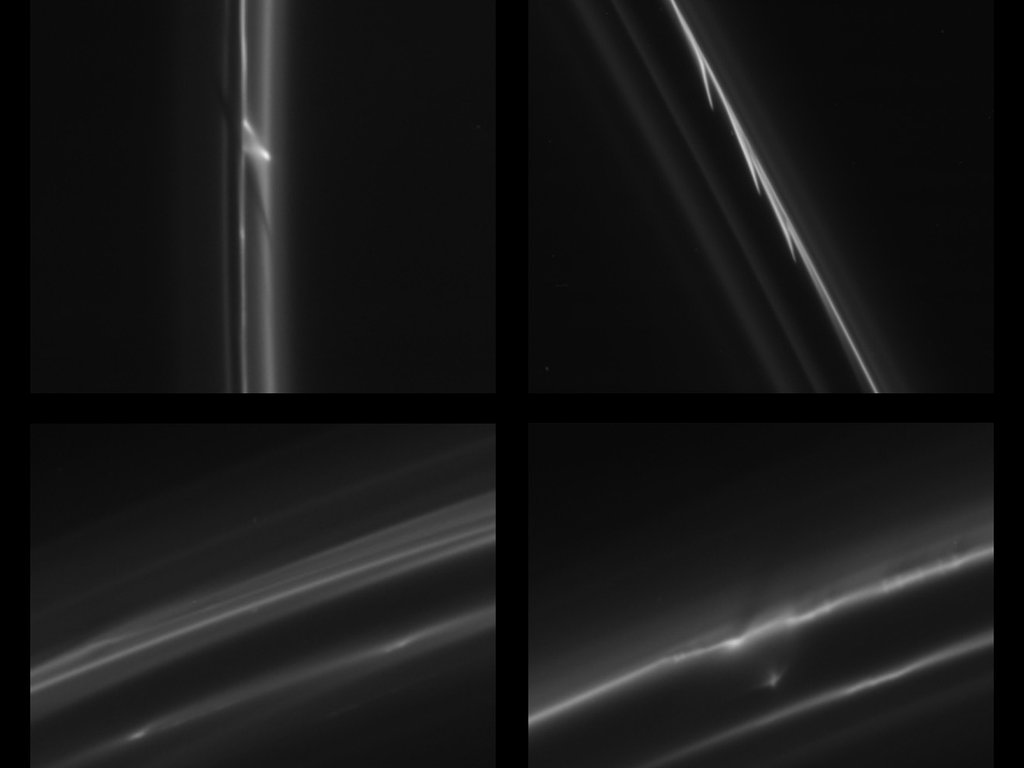 This set of four images obtained by NASA's Cassini spacecraft shows some of the more bizarre trails that were dragged out from Saturn's F ring by objects about a half mile (1 kilometer) in diameter. › Full image and caption 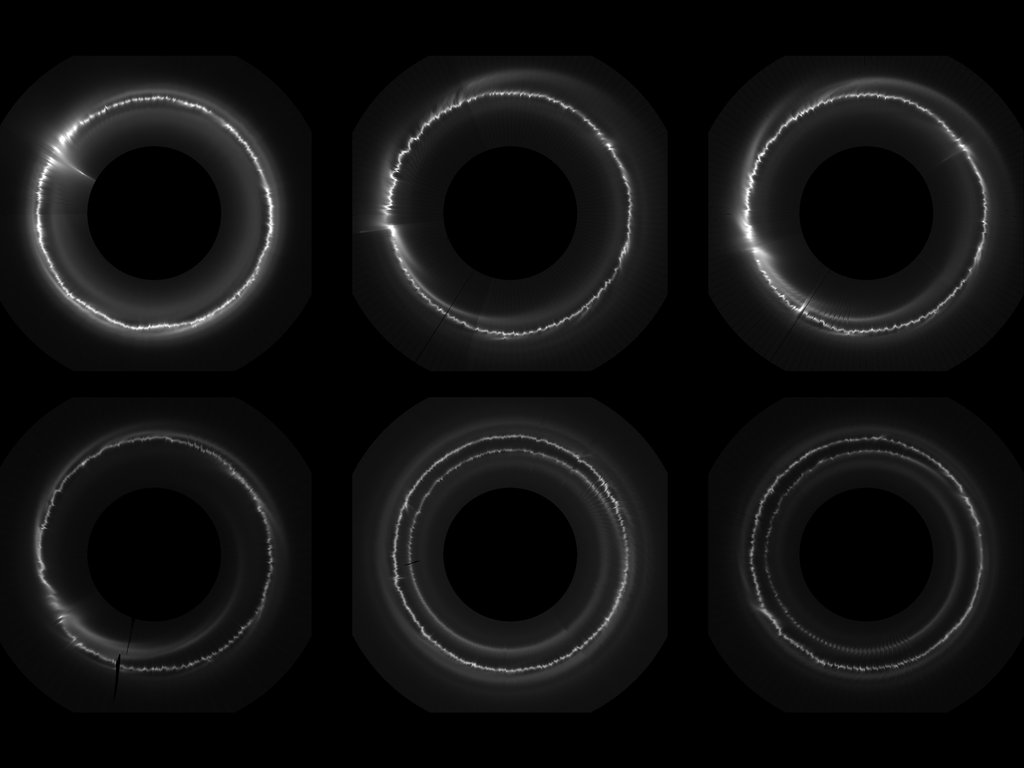 The constant change in Saturn's wavy, wiggly F ring is on display in this set of images obtained by NASA's Cassini spacecraft. The images show a view looking directly down onto the ring with the planet removed from the center.› Full image and caption
Credit: NASA/JPL-Caltech/SSI/QMUL

PASADENA, Calif. - Scientists working with images from NASA's Cassini spacecraft have discovered strange half-mile-sized (kilometer-sized) objects punching through parts of Saturn's F ring, leaving glittering trails behind them. These trails in the rings, which scientists are calling "mini-jets," fill in a missing link in our story of the curious behavior of the F ring. The results will be presented tomorrow at the European Geosciences Union meeting in Vienna, Austria.

"I think the F ring is Saturn's weirdest ring, and these latest Cassini results go to show how the F ring is even more dynamic than we ever thought," said Carl Murray, a Cassini imaging team member based at Queen Mary University of London, England. "These findings show us that the F ring region is like a bustling zoo of objects from a half mile [kilometer] to moons like Prometheus a hundred miles [kilometers] in size, creating a spectacular show."

New images and movies of the mini-jets and other peculiar F ring behavior are available at http://www.nasa.gov/mission_pages/cassini/whycassini/cassini20120423.html .

Scientists have known that relatively large objects like Prometheus (as long as 92 miles, or 148 kilometers, across) can create channels, ripples and snowballs in the F ring. But scientists didn't know what happened to these snowballs after they were created, Murray said. Some were surely broken up by collisions or tidal forces in their orbit around Saturn, but now scientists have evidence that some of the smaller ones survive, and their differing orbits mean they go on to strike through the F ring on their own.

These small objects appear to collide with the F ring at gentle speeds - something on the order of about 4 mph (2 meters per second). The collisions drag glittering ice particles out of the F ring with them, leaving a trail typically 20 to 110 miles (40 to 180 kilometers) long. Murray's group happened to see a tiny trail in an image from Jan. 30, 2009 and tracked it over eight hours. The long footage confirmed the small object originated in the F ring, so they went back through the Cassini image catalog to see if the phenomenon was frequent.

"The F ring has a circumference of 550,000 miles [881,000 kilometers], and these mini-jets are so tiny they took quite a bit of time and serendipity to find," said Nick Attree, a Cassini imaging associate at Queen Mary. "We combed through 20,000 images and were delighted to find 500 examples of these rogues during just the seven years Cassini has been at Saturn."

In some cases, the objects traveled in packs, creating mini-jets that looked quite exotic, like the barb of a harpoon. Other new images show grand views of the entire F ring, showing the swirls and eddies that ripple around the ring from all the different kinds of objects moving through and around it.

"Beyond just showing us the strange beauty of the F ring, Cassini's studies of this ring help us understand the activity that occurs when solar systems evolve out of dusty disks that are similar to, but obviously much grander than, the disk we see around Saturn," said Linda Spilker, Cassini project scientist based at NASA's Jet Propulsion Laboratory, Pasadena, Calif. "We can't wait to see what else Cassini will show us in Saturn's rings."

The Cassini-Huygens mission is a cooperative project of NASA, the European Space Agency, and the Italian Space Agency. NASA's Jet Propulsion Laboratory, Pasadena, Calif., manages the mission for NASA's Science Mission Directorate, Washington, D.C. The imaging team is based at the Space Science Institute, Boulder, Colo. JPL is a division of the California Institute of Technology, Pasadena.