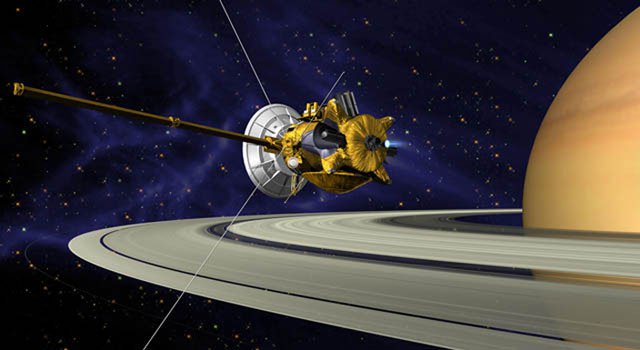 NASA's Cassini spacecraft will execute the largest planned maneuver of the spacecraft's remaining mission on Aug. 9.

NASA's Cassini spacecraft will execute the largest planned maneuver of the spacecraft's remaining mission on Saturday, Aug. 9. The maneuver will target Cassini toward an Aug. 21 encounter with Saturn's largest moon, Titan.

The main engine firing will last about a minute and will provide a change in velocity of 41 feet per second (12.5 meters per second). This is the largest maneuver by Cassini in five years. No other remaining maneuver comes close, in the amount of propellant it will consume and the amount by which it will change the spacecraft's velocity. By contrast, the smallest maneuvers Cassini routinely executes are about 0.4 inches (10 millimeters) per second.

The large size of the Aug. 9 burn is needed to begin the process of "cranking down" Cassini's orbit, so that the spacecraft circles Saturn nearer to the plane of the rings and moons. Previously, with each Titan flyby, mission controllers adjusted the spacecraft's orbit to be increasingly inclined, carrying Cassini high above Saturn's polar regions. The upcoming maneuver starts reversing that trend, making the orbit increasingly close to the equator.

Although Cassini has occasionally performed similar large propulsive maneuvers during its decade in the Saturn system, Titan itself has proven to be the workhorse for steering Cassini around Saturn. It is not uncommon for the spacecraft to receive a gravitational assist, or boost, from Titan that rivals or exceeds the 96-minute engine burn Cassini performed in 2004 to insert itself into Saturn orbit.

The Cassini-Huygens mission is a cooperative project of NASA, the European Space Agency and the Italian Space Agency. NASA's Jet Propulsion Laboratory, Pasadena, California, manages the mission for NASA's Science Mission Directorate in Washington. JPL is a division of the California Institute of Technology.