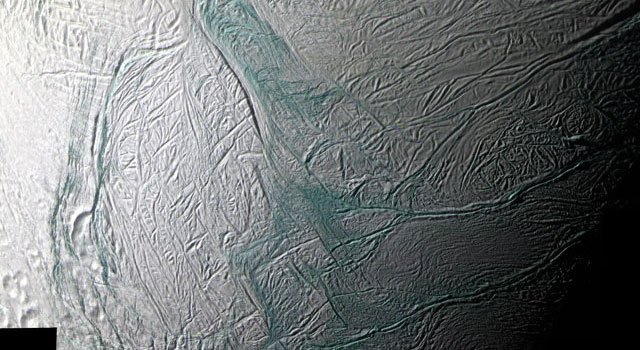 This sweeping mosaic of Saturn's moon Enceladus was taken during the flyby on Aug. 11, 2008. Full image and caption

This graphic shows the trajectories for the Cassini spacecraft flybys planned for Oct. 9 and 31, 2008.
Credit: NASA/JPL

As major league baseball readies for the World Series, NASA's Cassini team will come to bat twice this month when the spacecraft flies by Saturn's geyser moon, Enceladus.

PASADENA, Calif. – As major league baseball readies for the World Series, NASA's Cassini team will come to bat twice this month when the spacecraft flies by Saturn's geyser moon, Enceladus.

Scientists are intrigued by the possibility that liquid water, perhaps even an ocean, may exist beneath the surface of Enceladus. Trace amounts of organics have also been detected, raising tantalizing possibilities about the moon's habitability.

While Cassini's cameras and other optical instruments were the focus of an Aug. 11 flyby, during Cassini's Oct. 9 flyby, the spacecraft's fields and particles instruments will venture deeper into the plume than ever before, directly sampling the particles and gases. The emphasis here is on the composition of the plume rather than imaging the surface.

"We know that Enceladus produces a few hundred kilograms per second of gas and dust and that this material is mainly water vapor and water ice," said Tamas Gambosi, Cassini scientist at the University of Michigan, Ann Arbor. "The water vapor and the evaporation from the ice grains contribute most of the mass found in Saturn's magnetosphere.

"One of the overarching scientific puzzles we are trying to understand is what happens to the gas and dust released from Enceladus, including how some of the gas is transformed to ionized plasma and is disseminated throughout the magnetosphere," said Gambosi.

On Oct. 31, the cameras and other optical remote sensing instruments will be front and center, imaging the fractures that slash across the moon's south polar region like stripes on a tiger.

These two flybys might augment findings from the most recent Enceladus flyby, which hint at possible changes associated with the icy moon. Cassini's Aug. 11 encounter with Enceladus showed temperatures over one of the tiger-stripe fractures were lower than those measured in earlier flybys. The fracture, called Damascus Sulcus, was about 160 to 167 Kelvin (minus 171 to minus 159 degrees Fahrenheit), below the 180 Kelvin (minus 136 degrees Fahrenheit) reported from a flyby in March of this year.

"We don't know yet if this is due to a real cooling of this tiger stripe, or to the fact that we were looking much closer, at a relatively small area, and might have missed the warmest spot," said John Spencer, Cassini scientist on the composite infrared spectrometer, at the Southwest Research Institute, Boulder, Colo.

Results from Cassini's magnetometer instrument during the August flyby suggest a difference in the intensity of the plume compared to earlier encounters. Information from the next two flybys will help scientists understand these observations.

Four more Enceladus flybys are planned in the next two years, bringing the total number to seven during Cassini's extended mission, called the Cassini Equinox Mission. The next Enceladus doubleheader will be November 2 and 21, 2009.

The Enceladus geysers were discovered by Cassini in 2005. Since then, scientists have been intrigued about what powers them, because the moon is so tiny, roughly the width of Arizona at only 500 kilometers (310 miles) in diameter.

Scientists anticipate reporting results from the two flybys in November and early December.

For images, videos and a mission blog on the flyby, visit: http://www.nasa.gov/cassini . More information on the Cassini mission is also available at http://saturn.jpl.nasa.gov .
Cassini site