Cassini Nears 100th Titan Flyby with a Look Back 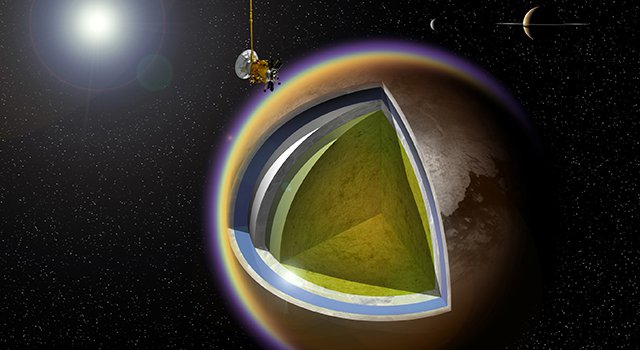 On the eve of NASA Cassini's 100th flyby of Titan, scientists are reminded how Earth-like this Saturn moon really is.

Ten years ago, we knew Titan as a fuzzy orange ball about the size of Mercury. We knew it had a nitrogen atmosphere -- the only known world with a thick nitrogen atmosphere besides Earth. But what might lie beneath the hazy air was still just a guess.

On March 6, NASA's Cassini spacecraft will swoop down within 933 miles (1,500 kilometers) of Titan to conduct its 100th flyby of the Saturn moon. Each flyby gives us a little more knowledge of Titan and its striking similarities to our world. Even with its cold surface temperatures of minus 290 degrees Fahrenheit (94 kelvins), Titan is like early Earth in a deep freeze.

Since its 2004 arrival at Saturn, Cassini's radar instrument has identified remarkable surface features on Titan. The features include lakes and seas made of liquid methane and ethane, which are larger than North America's Great Lakes, and an extensive layer of liquid water deep beneath the surface. Organic molecules abound in Titan's atmosphere, formed from the breakup of methane by solar radiation.

A recent innovation was the discovery that radar could be used to determine the depth of a Titan sea. "It's something we didn't think we could do before," said Michael Malaska, an affiliate of the Cassini radar team at NASA's Jet Propulsion Laboratory, Pasadena, Calif. "The radar can measure the depth by receiving two different bounces: one from the surface and one from the bottom of the sea. This technique was used to determine that Ligeia Mare, the second largest sea on Titan, is about 160 meters [525 feet] deep. When coupled with some laboratory experiments, it gives us information about the composition of the liquid in Ligeia Mare, too."

As spring turns to summer in Titan's northern hemisphere for the first time since Cassini arrived at Saturn, scientists are looking forward to entering potentially the most exciting time for Titan weather - with waves and winds picking up. With increasing sunlight, the north polar lakes and seas can now be seen in near-infrared images, enabling scientists to learn more about their composition and giving them clues about the surrounding terrain.

"Methane is not only in the atmosphere, but probably in the crust," said Jonathan Lunine, a scientist on the Cassini mission at Cornell University, Ithaca, N.Y. "It's a hint there are organics not only in Titan's air and on the surface, but even in the deep interior, where liquid water exists as well. Organics are the building blocks of life, and if they are in contact with liquid water, there could be a chance of finding some form of life."

Linda Spilker, Cassini project scientist at JPL, speculated on the type of life that could exist. "The astrobiological potential for Titan is two-fold," she said. "Could a unique form of methane-based life exist in Titan's liquid lakes and seas? With a global ocean of liquid water beneath its icy crust, could life exist in Titan's subsurface ocean?"

Although the official Cassini mission name for this flyby is T-99, it is, in fact, the 100th targeted Titan flyby of the mission. Why the discrepancy? An extra flyby was inserted early in the mission, after the Titan flybys had been named.

For additional details on this 100th flyby, visit: http://saturn.jpl.nasa.gov/mission/flybys/titan20140306/