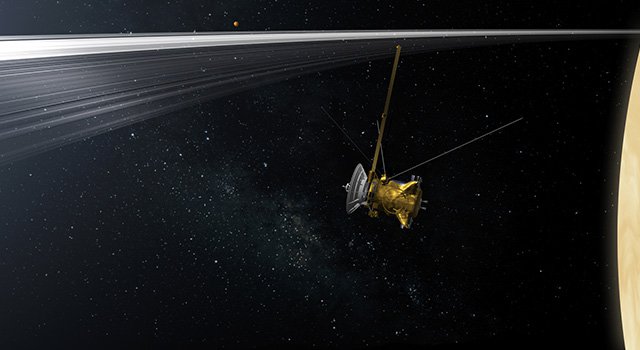 With help from the public, members of NASA's Cassini mission have chosen to call the spacecraft's final orbits the "Cassini Grand Finale."
Credit: NASA/JPL-Caltech

With input from the public, team members on NASA's Cassini mission to Saturn have chosen a name for the final phase of the mission.

With input from more than 2,000 members of the public, team members on NASA's Cassini mission to Saturn have chosen a name for the final phase of the mission: the Cassini Grand Finale.

Starting in late 2016, the Cassini spacecraft will begin a daring set of orbits that is, in some ways, like a whole new mission. The spacecraft will repeatedly climb high above Saturn's north pole, flying just outside its narrow F ring. Cassini will probe the water-rich plume of the active geysers on the planet's intriguing moon Enceladus, and then will hop the rings and dive between the planet and innermost ring 22 times.

Because the spacecraft will be in close proximity to Saturn, the team had been calling this phase "the proximal orbits," but they felt the public could help decide on a more exciting moniker. In early April, the Cassini mission invited the public to vote on a list of alternative names provided by team members or to suggest ideas of their own.

"We chose a name for this mission phase that would reflect the exciting journey ahead while acknowledging that it's a big finish for what has been a truly great show," said Earl Maize, Cassini project manager at NASA's Jet Propulsion Laboratory in Pasadena, California.

For more information about the name contest, visit:

For a visualization of the Grand Finale, visit: