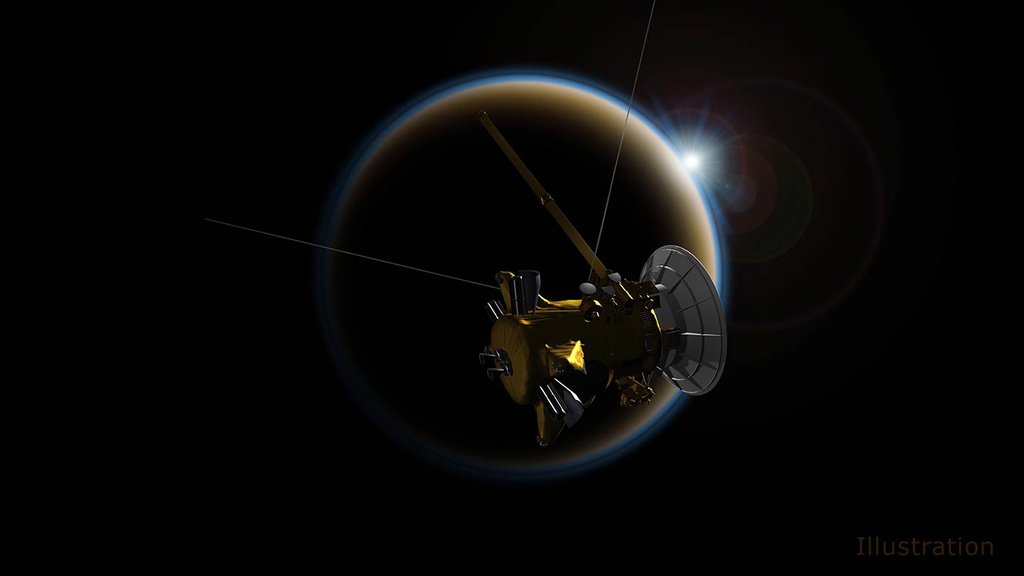 Cassini will make its final close flyby of Saturn's moon Titan on April 21 (PDT), using its radar to reveal the moon's surface lakes and seas one last time.
Credit: NASA/JPL-Caltech

NASA's Cassini spacecraft will make its final close flyby of Saturn's haze-enshrouded moon Titan this weekend. The flyby marks the mission's final opportunity for up-close observations of the lakes and seas of liquid hydrocarbons that spread across the moon's northern polar region, and the last chance to use its powerful radar to pierce the haze and make detailed images of the surface.

The flyby is also the gateway to Cassini's Grand Finale -- a final set of 22 orbits that pass between the planet and its rings, ending with a plunge into Saturn on Sept. 15 that will end the mission. During the close pass on April 21, Titan's gravity will bend Cassini's orbit around Saturn, shrinking it slightly, so that instead of passing just outside the rings, the spacecraft will begin its finale dives which pass just inside the rings.

The flyby is Cassini's 127th targeted encounter with Titan. A targeted flyby is one for which the spacecraft uses its rocket engine or thrusters to accurately aim toward the encounter.

Cassini's radar instrument will look for changes in Titan's methane lakes and seas, and attempt for the first (and last) time to study the depth and composition of Titan's smaller lakes. The radar instrument will also search a final time for Titan's "magic island," a mysterious feature in one of the moon's seas that changed in appearance over the course of several flybys. Scientists hope to gain additional insights to help them determine whether the feature is waves, bubbles, floating debris, or something else entirely.

More information about Cassini's final Titan flyby is available at:

https://www.jpl.nasa.gov/edu/news/2017/4/25/a-moment-you-wont-want-to-miss-cassinis-daring-mission-finale-between-the-rings-and-saturn/
Teachable Moment: Cassini's Daring Mission Finale Between the Rings and Saturn
› Check it out