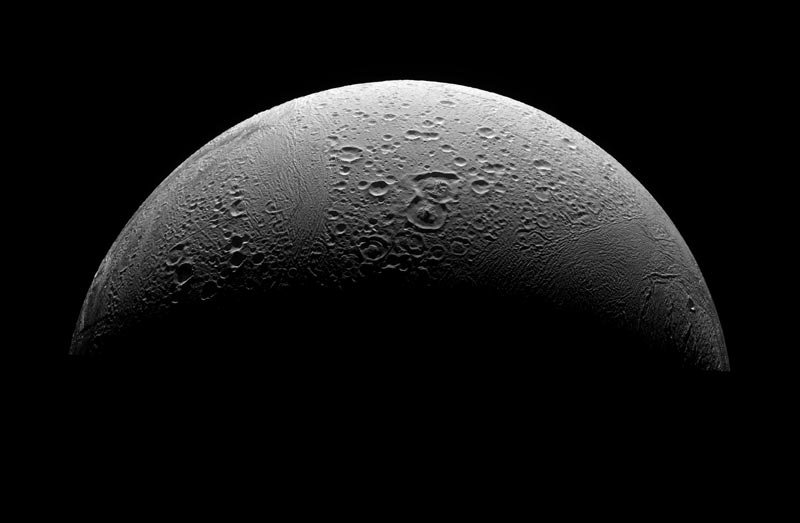 This three-image mosaic is the highest resolution view yet obtained of Enceladus' north polar region. The view looks southward over cratered plains from high above the north pole of Enceladus.> Full image and caption
Credit: NASA/JPL/Space Science Institute

NASA's Cassini spacecraft performed a daring flyby of Saturn's moon Enceladus on Wed., March 12, flying about 15 kilometers per second (32,000 mph) through icy water geyser-like jets. The spacecraft snatched up precious samples that might point to a water ocean or organics inside the little moon.

Scientists believe the geysers could provide evidence that liquid water is trapped under the icy crust of Enceladus. The geysers emanate from fractures running along the moon's south pole, spewing out water vapor at approximately 400 meters per second (800 mph).

The new data provide a much more detailed look at the fractures that modify the surface and will give a significantly improved comparison between the geologic history of the moon's north pole and south pole.

New images show that compared to much of the southern hemisphere on Enceladus--the south polar region in particular--the north polar region is much older and pitted with craters of various sizes. These craters are captured at different stages of disruption and alteration by tectonic activity, and probably from past heating from below. Many of the craters seem sliced by small parallel cracks that appear to be ubiquitous throughout the old cratered terrains on Enceladus.

"These new images are showing us in great detail how the moon's north pole differs from the south, an important comparison for working out the moon's obviously complex geological history," said Carolyn Porco, Cassini imaging team leader, Space Science Institute, Boulder, Colo. "And the success of yesterday's daring and very low-altitude flyby means this coming summer's very close encounter, when we get exquisitely detailed images of the surface sources of Enceladus' south polar jets, should be an exciting 'next big step' in understanding just how the jets are powered."

This week's flyby and another one planned for Oct. 9, 2008, were designed so that Cassini's particle analyzers could dissect the "body" of the plume for information on the density, size, composition and speed of the particles. Among other things, scientists will use the data gathered this week to figure out whether the gases from the plume match the gases that make up the halo of particles around Enceladus. This may help determine how the plumes formed.

During Cassini's closest approach, two instruments were collecting data--the Cosmic Dust Analyzer and the Ion and Neutral Mass Spectrometer. An unexplained software hiccup with Cassini's Cosmic Dust Analyzer instrument prevented it from collecting any data during closest approach, although the instrument did get data before and after the approach. During the flyby, the instrument was switching between two versions of software programs. The new version was designed to increase the ability to count particle hits by several hundred hits per second. The other four fields and particles instruments on the spacecraft, in addition to the ion and neutral mass spectrometer, did capture all of their data, which will complement the overall composition studies and elucidate the unique plume environment of Enceladus.

Cassini's instruments discovered evidence for the geyser-like jets on Enceladus in 2005, finding that the continuous eruptions of ice water create a gigantic halo of ice dust and gas around Enceladus, which helps supply material to Saturn's E-ring.

This was the first of four Cassini flybys of Enceladus this year. During Wednesday's flyby, the spacecraft came within 50 kilometers (30 miles) of the surface at closest approach, 200 kilometers (120 miles) while flying through the plume. Future trips may bring Cassini even closer to the surface of Enceladus. Cassini will complete its prime mission, a four-year tour of Saturn, in June. From then on, a proposed extended mission would include seven more Enceladus flybys. The next Enceladus flyby would take place in August of this year.

For more images and more information, visit: http://www.nasa.gov/cassini and http://saturn.jpl.nasa.gov .