Cassini Finds Saturn Moon May Have Tipped Over 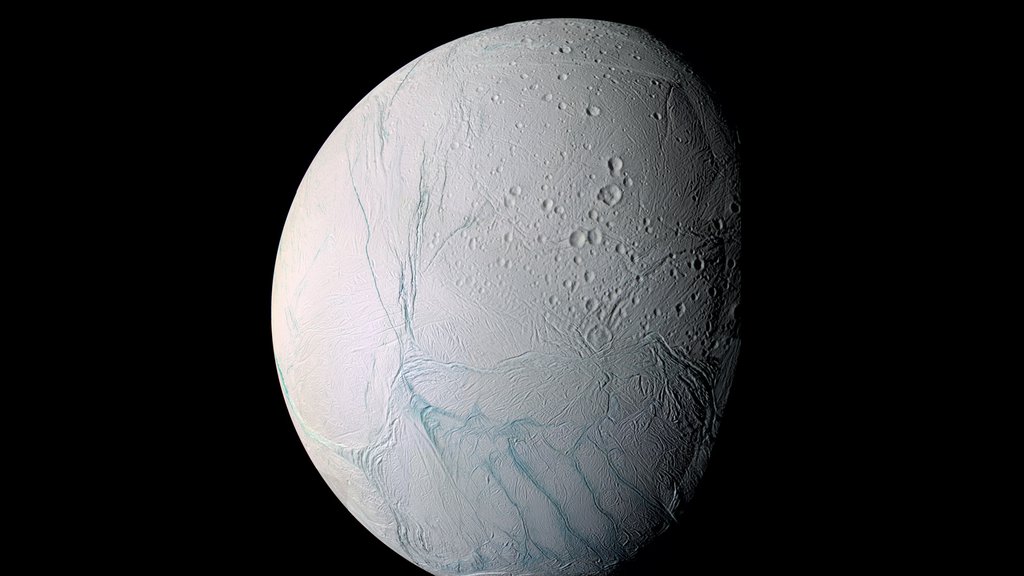 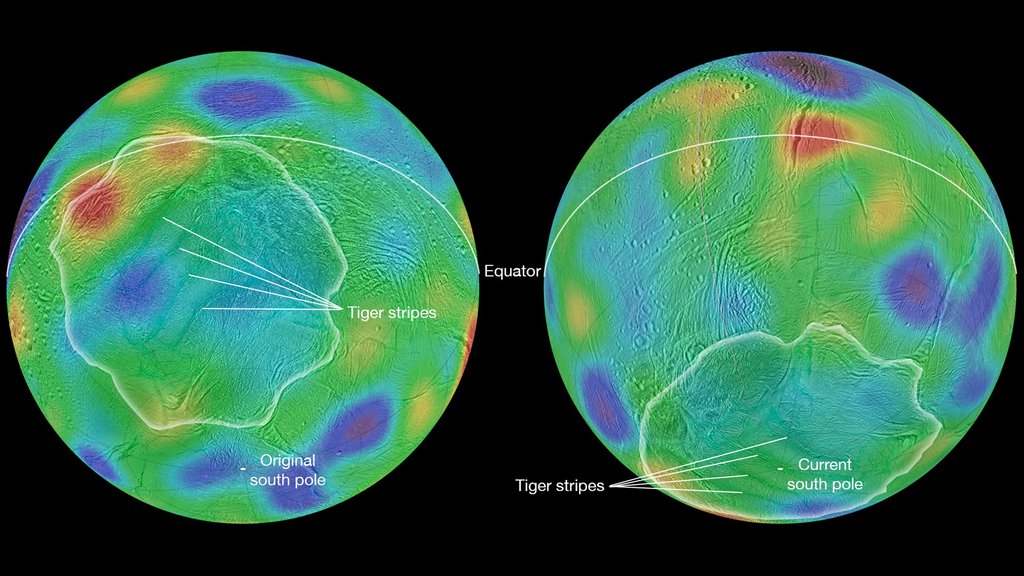 Working with image data from NASA's Cassini mission, researchers have found evidence that Saturn's moon Enceladus may have tipped over, reorienting itself so that terrain closer to its original equator was relocated to the poles.› Full image and caption
Credit: NASA/JPL-Caltech/Space Science Institute/Cornell University

Saturn's icy, ocean-bearing moon Enceladus may have tipped over in the distant past, according to recent research from NASA's Cassini mission.

Saturn's icy, ocean-bearing moon Enceladus may have tipped over in the distant past, according to recent research from NASA's Cassini mission. Researchers with the mission found evidence that the moon's spin axis -- the line through the north and south poles -- has reoriented, possibly due to a collision with a smaller body, such as an asteroid.

Examining the moon's features, the team showed that Enceladus appears to have tipped away from its original axis by about 55 degrees -- more than halfway toward rolling completely onto its side. "We found a chain of low areas, or basins, that trace a belt across the moon's surface that we believe are the fossil remnants of an earlier, previous equator and poles," said Radwan Tajeddine, a Cassini imaging team associate at Cornell University, Ithaca, New York, and lead author of the paper.

The area around the icy moon's current south pole is a geologically active region where long, linear fractures referred to as tiger stripes slice across the surface. Tajeddine and colleagues speculate that an asteroid may have struck the region in the past when it was closer to the equator. "The geological activity in this terrain is unlikely to have been initiated by internal processes," he said. "We think that, in order to drive such a large reorientation of the moon, it's possible that an impact was behind the formation of this anomalous terrain."

In 2005, Cassini discovered that jets of water vapor and icy particles spray from the tiger stripe fractures -- evidence that an underground ocean is venting directly into space from beneath the active south polar terrain.

Whether it was caused by an impact or some other process, Tajeddine and colleagues think the disruption and creation of the tiger-stripe terrain caused some of Enceladus' mass to be redistributed, making the moon's rotation unsteady and wobbly. The rotation would have eventually stabilized, likely taking more than a million years. By the time the rotation settled down, the north-south axis would have reoriented to pass through different points on the surface -- a mechanism researchers call "true polar wander."

The polar wander idea helps to explain why Enceladus' modern-day north and south poles appear quite different. The south is active and geologically young, while the north is covered in craters and appears much older. The moon's original poles would have looked more alike before the event that caused Enceladus to tip over and relocate the disrupted tiger-stripe terrain to the moon's south polar region.

The results were published in the online edition of the journal Icarus on April 30, 2017.