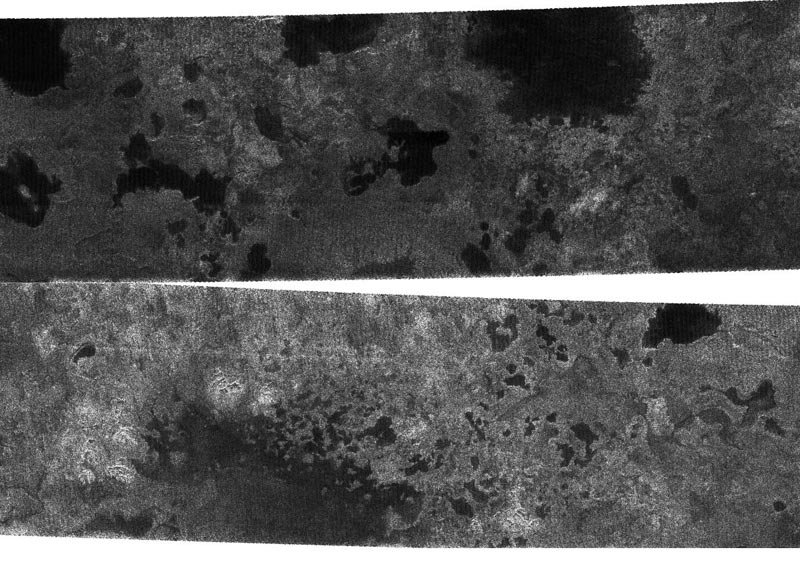 NASA's Cassini spacecraft has found lakes on Saturn's moon Titan. The lakes are most likely the source of hydrocarbon smog in the frigid moon's atmosphere.

Numerous well-defined dark patches resembling lakes are present in radar images of Titan's high latitudes taken during a July 22 flyby. At Titan's frigid temperatures, about minus 180 degrees Celsius, the liquids in the lakes are most likely methane or a combination of methane and ethane.

This area of Titan has been in winter's shadow since before Cassini arrived, and the spacecraft had not flown over it before. During the flyby, Cassini's radar spotted several dozen lakes as small as 0.6 miles wide, with some nearly 20 miles wide. The biggest lake is about 62 miles long and may be only partly wet.

"What we see is darker than anything we've ever seen elsewhere on Titan. It was almost as though someone laid a bull's-eye around the whole north pole of Titan, and Cassini sees these regions of lakes just like those we see on Earth," said Larry Soderblom, Cassini interdisciplinary scientist at the U.S. Geological Survey, Flagstaff, Ariz.  "Titan has turned out to be like a musical crescendo -- each pass is more exciting than the last."

Titan has not yielded its secrets easily because the dense smoggy atmosphere makes it very difficult to obtain good visible images.  Radar can penetrate the smog and obtain clear images.

Dark regions in radar images generally mean smoother terrain, while bright regions mean a rougher surface. Some of the new radar images show channels leading in or out of a variety of dark patches. The shape of the channels also strongly implies they were carved by liquid.

Some of the dark patches and connecting channels are completely black -- they reflect back essentially no radar signal, which means they must be extremely smooth and might contain liquid. In some cases rims can be seen around the dark patches, suggesting deposits that might form as liquid evaporates.

Scientists had predicted, but had no confirmation until now, that pools of liquid were contributing to the high concentration of methane and other hydrocarbons in Titan's atmosphere.

"We've always believed Titan's methane had to be maintained by liquid lakes or extensive underground 'methanofers,' the methane equivalent of aquifers. We can't see methanofers but we can now say we've seen lakes," said Jonathan Lunine, Cassini interdisciplinary scientist at the University of Arizona, Tucson.

Since lakes come and go with the seasons, they wax and wane over time. Winds might alter the roughness of their surfaces. Repeat coverage of these areas is expected to provide more information on these lakes. By passing over a lake in a different direction, Cassini may see the effect of prevailing winds in the changing brightness of the lake surface.  On later passes toward the end of its prime mission, Cassini might see changes in the shape or size of lakes as winter yields to spring in the northern hemisphere.

Cassini's next flyby of Titan is on September 7. In October, Cassini's radar will look even closer to the north pole, searching for more lakes and mapping more of the polar region covered by these features.

For images of the lakes and more information, visit: http://www.nasa.gov/cassini and http://saturn.jpl.nasa.gov .