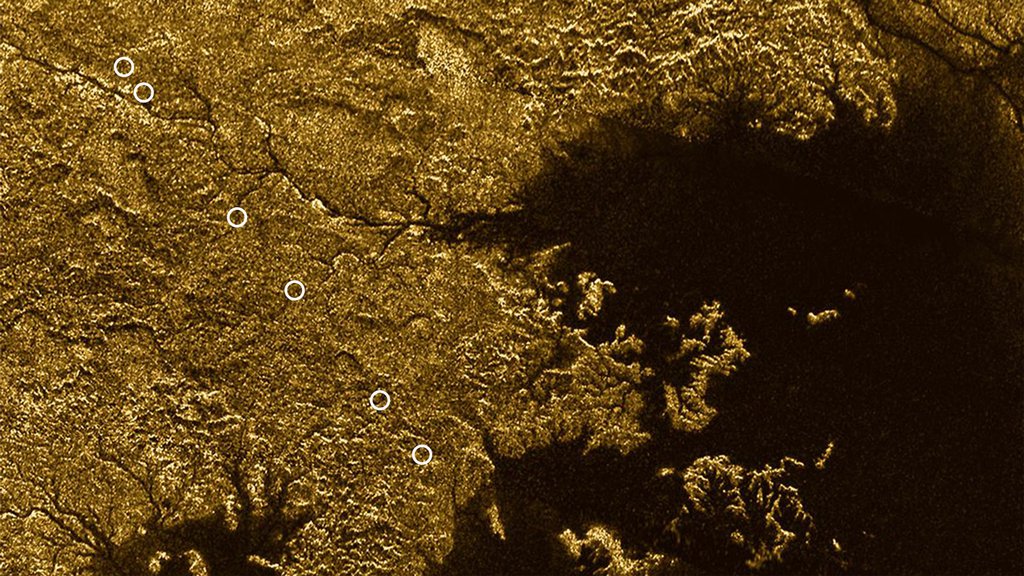 NASA's Cassini spacecraft pinged the surface of Titan with microwaves, finding that some channels are deep, steep-sided canyons filled with liquid hydrocarbons. One such feature is Vid Flumina, the branching network of narrow lines in the upper-left quadrant of the image.› Original image and caption
Credit: NASA/JPL-Caltech/ASI |

NASA's Cassini spacecraft has found deep, steep-sided canyons on Saturn's moon Titan that are flooded with liquid hydrocarbons. The finding represents the first direct evidence of the presence of liquid-filled channels on Titan, as well as the first observation of canyons hundreds of meters deep.

A new paper in the journal Geophysical Research Letters describes how scientists analyzed Cassini data from a close pass the spacecraft made over Titan in May 2013. During the flyby, Cassini's radar instrument focused on channels that branch out from the large, northern sea Ligeia Mare.

The Cassini observations reveal that the channels -- in particular, a network of them named Vid Flumina -- are narrow canyons, generally less than half a mile (a bit less than a kilometer) wide, with slopes steeper than 40 degrees. The canyons also are quite deep -- those measured are 790 to 1,870 feet (240 to 570 meters) from top to bottom.

The branching channels appear dark in radar images, much like Titan's methane-rich seas. This suggested to scientists that the channels might also be filled with liquid, but a direct detection had not been made until now. Previously it wasn't clear if the dark material was liquid or merely saturated sediment -- which at Titan's frigid temperatures would be made of ice, not rock.

Cassini's radar is often used as an imager, providing a window to peer through the dense haze that surrounds Titan to reveal the surface below. But during this pass, the radar was used as an altimeter, sending pings of radio waves to the moon's surface to measure the height of features there. The researchers combined the altimetry data with previous radar images of the region to make their discovery.

Key to understanding the nature of the channels was the way Cassini's radar signal reflected off the bottoms of the features. The radar instrument observed a glint, indicating an extremely smooth surface like that observed from Titan's hydrocarbon seas. The timing of the radar echoes, as they bounced off the canyons' edges and floors, provided a direct measure of their depths.

The presence of such deep cuts in the landscape indicates that whatever process created them was active for a long time or eroded down much faster than other areas on Titan's surface. The researchers' proposed scenarios include uplift of the terrain and changes in sea level, or perhaps both.

"It's likely that a combination of these forces contributed to the formation of the deep canyons, but at present it's not clear to what degree each was involved. What is clear is that any description of Titan's geological evolution needs to be able to explain how the canyons got there," said Valerio Poggiali of the University of Rome, a Cassini radar team associate and lead author of the study.

Earthly examples of both of these types of canyon-carving processes are found along the Colorado River in Arizona. An example of uplift powering erosion is the Grand Canyon, where the terrain's rising altitude caused the river to cut deeply downward into the landscape over the course of several million years. For canyon formation driven by variations in water level, look to Lake Powell. When the water level in the reservoir drops, it increases the river's rate of erosion.

"Earth is warm and rocky, with rivers of water, while Titan is cold and icy, with rivers of methane. And yet it's remarkable that we find such similar features on both worlds," said Alex Hayes, a Cassini radar team associate at Cornell University, Ithaca, New York, and a co-author of the study.

While the altimeter data also showed that the liquid in some of the canyons around Ligeia Mare is at sea level -- the same altitude as the liquid in the sea itself -- in others it sits tens to hundreds of feet (tens of meters) higher in elevation. The researchers interpret the latter to be tributaries that drain into the main channels below.

Future work will extend the methods used in this study to all other channels Cassini's radar altimeter has observed on Titan. The researchers expect their continued work to produce a more comprehensive understanding of forces that have shaped the Saturnian moon's landscape.