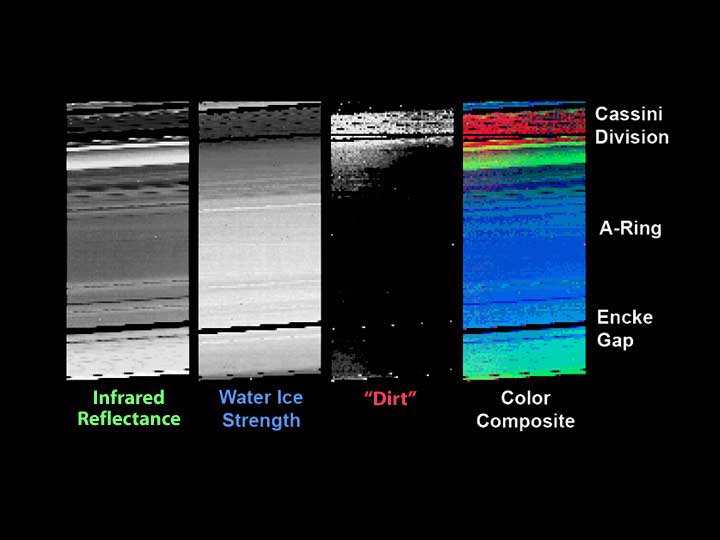 The visual and infrared mapping spectrometer on the Cassini spacecraft has found evidence for a material dubbed "dirt" in Saturn's rings. The observations indicate that some type of sorting mechanism is concentrating this unidentified material in the gaps between the rings.

One early result intriguing scientists concerns Saturn’s Cassini Division, the large gap between the A and B rings. While Saturn’s rings are almost exclusively composed of water ice, new findings show the Cassini Division contains relatively more "dirt" than ice. Further, the particles between the rings seem remarkably similar to the dark material that scientists saw on Saturn’s moon, Phoebe. These dark particles refuel the theory that the rings might be the remnants of a moon. The F ring was also found to contain more dirt.

Another instrument on Cassini has detected large quantities of oxygen at the edge of the rings. Scientists are still trying to understand these results, but they think the oxygen may be left over from a collision that occurred as recently as January of this year.

"In just two days, our ideas about the rings have been expanded tremendously," said Dr. Linda Spilker, of NASA's Jet Propulsion Laboratory, Pasadena, Calif., deputy project scientist for the Cassini-Huygens mission. "The Phoebe-like material is a big surprise. What puzzles us is that the A and B rings are so clean and the Cassini Division between them appears so dirty."

The visual and infrared mapping spectrometer onboard Cassini revealed the dirt mixed with the ice in the Cassini Division and in other small gaps in the rings, as well as in the F ring.

"The surprising fingerprint in the data is that the dirt appears similar to what we saw at Phoebe. In the next several months we will be looking for the origin of this material," said Dr. Roger Clark, of the U.S. Geological Survey, Denver, Colo., and a member of the Cassini science team.

Cassini's ultraviolet imaging instrument detected the sudden and surprising increase in the amount of atomic oxygen at the edge of the rings. The finding leads scientists to hypothesize that something may have collided with the main rings, producing the excess oxygen.

Dr. Donald Shemansky of the University of Southern California, Los Angeles, co-investigator for Cassini's ultraviolet imaging spectrograph instrument, said, "What is surprising is the evidence of a strong, sudden event during the observation period causing substantial variation in the oxygen distribution and abundance." Although atomic oxygen has not been previously observed, its presence is not a surprise because hydroxyl was discovered earlier from Hubble Space Telescope observations, and these chemicals are both products of water chemistry.

Cassini's examination of Saturn's atmosphere began while the spacecraft was still approaching the planet. Winds on Saturn near the equator decrease dramatically with altitude above the cloud tops. The winds fall off by as much 140 meters per second (approximately 300 miles per hour) over an altitude range of 300 kilometers (approximately 200 miles) in the upper stratosphere. This is the first time winds have been measured at altitudes so high in Saturn's atmosphere.

"We are finally defining the wind field in three dimensions, and it is very complex," said Dr. Michael Flasar of NASA Goddard Space Flight Center, Greenbelt, Md., principal investigator for Cassini's composite infrared spectrometer. "Temperature maps obtained now that Cassini is orbiting Saturn are expected to show more detail, helping us to unravel the riddles of Saturn's winds above the cloud tops."

Early Friday (Pacific Time), Cassini imaged Saturn’s largest moon Titan, one of the prime targets for the mission. Titan is thought to harbor simple organic compounds that may be important in understanding the chemical building blocks that led to life on Earth. Although too cold to support life now, Titan serves as a frozen vault to see what early Earth might have been like. Scientists will receive the new data and images from Titan later Friday.

For the latest images and more information about the Cassini-Huygens mission, visit http://saturn.jpl.nasa.gov and http://www.nasa.gov/cassini.