Cassini Discovers Ring and One, Possibly Two, Objects at Saturn 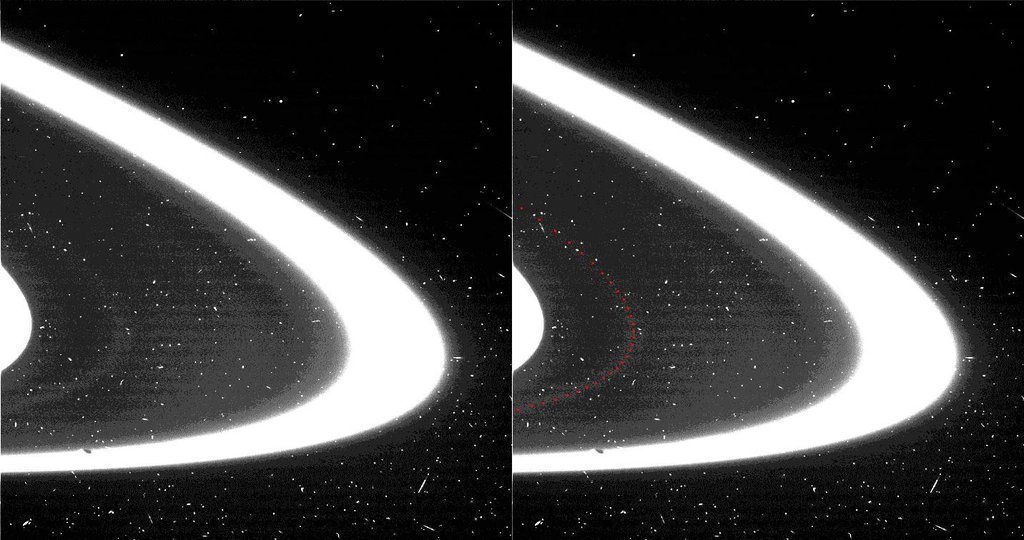 A new found ring of material, S/2004 1 R, in the orbit of Saturn's moon Atlas has been seen in this view of the region between the edge of Saturn's A ring and the F ring. + Full image and caption 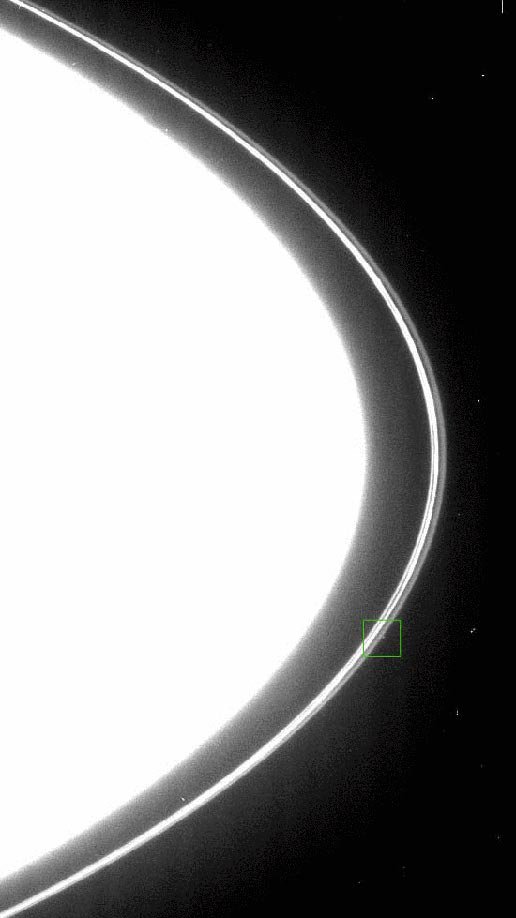 A small new found object, temporarily designated S/2004 S 3, has been seen orbiting Saturn's outer F ring. The tiny object, seen in this movie centered in a green box, orbits the planet at a distance of approximately 141,000 kilometers (86,420 miles) from the center of Saturn. Its nature, moon or clump, is not presently known. + Animation and caption

A small object was discovered moving near the outside edge of the F ring, interior to the orbit of Saturn's moon Pandora. The object was seen by Dr. Carl Murray, imaging team member at Queen Mary, University of London, in images taken on June 21, 2004, just days before Cassini arrived at Saturn. "I noticed this barely detectable object skirting the outer part of the F ring. It was an incredible privilege to be the first person to spot it," he said. Murray's group at Queen Mary then calculated an orbit for the object.

Scientists are not sure if the object is alone. This is because of results from a search through other images that might capture the object to pin down its orbit. The search by Dr. Joseph Spitale, a planetary scientist working with team leader Dr. Carolyn Porco at the Space Science Institute in Boulder, Colo., revealed something strange. Spitale said, "When I went to look for additional images of this object to refine its orbit, I found that about five hours after first being sighted, it seemed to be orbiting interior to the F ring," said Spitale. "If this is the same object then it has an orbit that crosses the F ring, which makes it a strange object." Because of the puzzling dynamical implications of having a body that crosses the ring, the inner object sighted by Spitale is presently considered a separate object with the temporary designation S/2004 S 4. S4 is roughly the same size as S3.

In the process of examining the F ring region, Murray also detected a previously unknown ring, S/2004 1R, associated with Saturn's moon, Atlas. "We knew from Voyager that the region between the main rings and the F ring is dusty, but the role of the moons in this region was a mystery," said Murray. "It was while studying the F ring in these images that I discovered the faint ring of material. My immediate hunch was that it might be associated with the orbit of one of Saturn's moons, and after some calculation I identified Atlas as the prime suspect."

The ring is located 138,000 kilometers (86,000 miles) from the center of Saturn in the orbit of the moon Atlas, between the A ring and the F ring. The width of the ring is estimated at 300 kilometers (190 miles). The ring was first spotted in images taken after orbit insertion on July 1, 2004. There is no way of knowing yet if it extends all the way around the planet.

"We have planned many images to search the region between the A and F rings for diffuse material and new moons, which we have long expected to be there on the basis of the peculiar behavior of the F ring," said Porco. "Now we have found something but, as is usual for the F ring, what we see is perplexing."

Searches will continue for further detections of the newfound body or bodies seen in association with the F ring. If the two objects indeed turn out to be a single moon, it will bring the Saturn moon count to 34. The newfound ring adds to the growing number of narrow ringlets around Saturn.

The Cassini-Huygens mission is a cooperative project of NASA, the European Space Agency and the Italian Space Agency. The Jet Propulsion Laboratory, a division of the California Institute of Technology in Pasadena, manages the Cassini-Huygens mission for NASA's Science Mission Directorate, Washington. The Cassini orbiter and its two onboard cameras were designed, developed and assembled at JPL. The imaging team is based at the Space Science Institute, Boulder, Colo. UK scientists are playing significant roles in the mission with involvement in six of the 12 instruments onboard the Cassini orbiter and two of the six instruments on the Huygens probe.