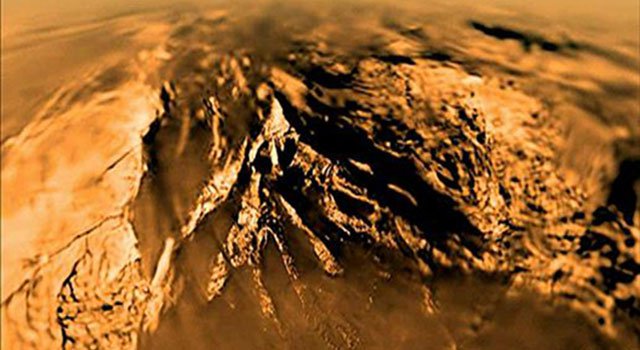 This movie was built with data collected during the 147-minute plunge through Titan's thick orange-brown atmosphere to a soft sandy riverbed by the European Space Agency's Huygens Descent Imager/Spectral Radiometer on Jan. 14, 2005.› Full image and caption
Credit: ESA/NASA/JPL/University of Arizona |

Saturn's moon Titan appears to have less gravity where there are mountains -- a counterintuitive finding.

An analysis of gravity and topography data from the Saturnian moon Titan obtained by NASA's Cassini spacecraft suggests there could be something unexpected about the moon's outer ice shell. The findings, published on Aug. 28 in the journal Nature, suggest that Titan's ice shell could be rigid, and that relatively small topographic features on the surface could be associated with large ice "roots" extending into the underlying ocean.

The study was led by planetary scientists Douglas Hemingway and Francis Nimmo at the University of California, Santa Cruz, who used data from Cassini. The researchers were surprised to find a counterintuitive relationship between gravity and topography.

One potential explanation is that each bump in the topography on the surface of Titan is offset by a deeper "root" that is big enough to overwhelm the gravitational effect of the bump on the surface. The root could act like an iceberg extending below the ice shell into the ocean underneath it. In this model, Cassini would detect less gravity wherever there is a big chunk of ice rather than water because ice is less dense than water.

"It's like a big beach ball under the ice sheet pushing up on it, and the only way to keep it submerged is if the ice sheet is strong," said Hemingway, the paper's lead author and a Cassini team associate. "If large roots under the ice shell are the explanation, this means that Titan's ice shell must have a very thick rigid layer."

If these findings are correct, a thick rigid ice shell makes it very difficult to have ice volcanoes, which some scientists have proposed to explain other features seen on the surface. They also suggest that convection or plate tectonics are not recycling Titan's ice shell, as they do with Earth's geologically active crust.

The Cassini-Huygens mission is a cooperative project of NASA, the European Space Agency, and the Italian Space Agency. The mission is managed by NASA's Jet Propulsion Laboratory, Pasadena, Calif., for NASA's Science Mission Directorate, Washington.

More information on Cassini can be found at http://www.nasa.gov/cassini and http://saturn.jpl.nasa.gov .