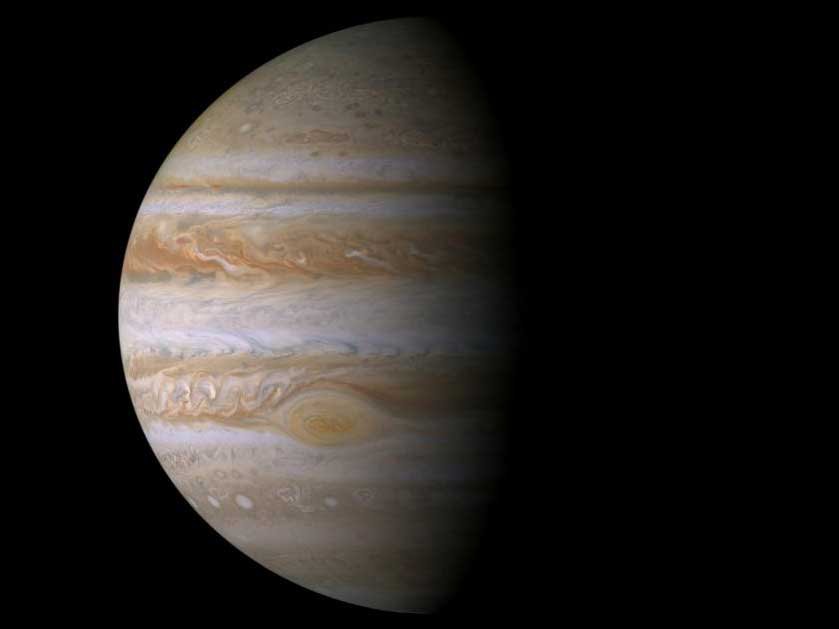 This true color mosaic of Jupiter was constructed from images taken by the narrow angle camera onboard NASA's Cassini spacecraft on December 29, 2000, during its closest approach to the giant planet at a distance of approximately 10 million kilometers (6.2 million miles).› Full image and caption
Credit: NASA/JPL/Space Science Institute 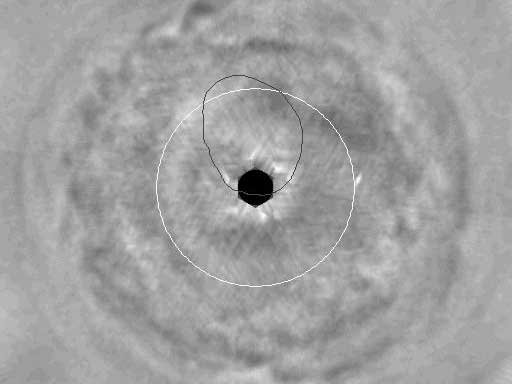 Unexpected dynamics in Jupiter's upper atmosphere, or stratosphere, including the birth and motion of a dark vortex wider than Earth, appear in a movie clip spanning 11 weeks of ultraviolet imaging by NASA's Cassini spacecraft.› Full image and caption
Credit: NASA/JPL/Southwest Research Institute 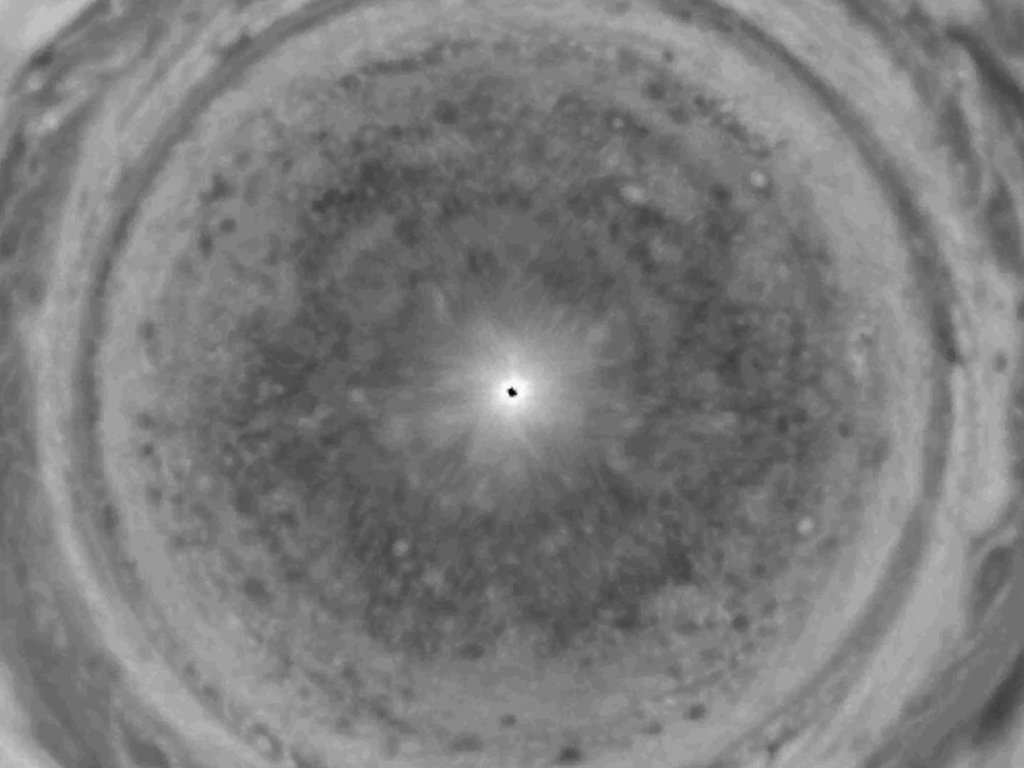 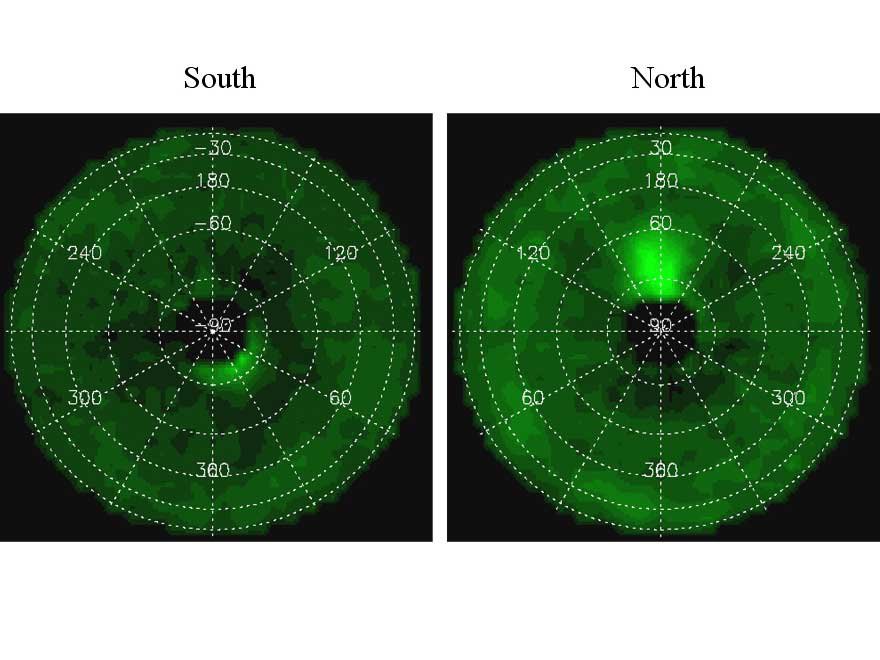 These images and movie show the distribution of the organic molecule acetylene at the north and south poles of Jupiter, based on data obtained by NASA's Cassini spacecraft in early January 2001.› Full image and caption
Credit: NASA/JPL/GSFC

NASA's Cassini spacecraft made its closest approach to the solar system's biggest planet on Dec. 30, 2000.

Ten years ago, on Dec. 30, 2000, NASA's Cassini spacecraft made its closest approach to Jupiter on its way to orbiting Saturn. The main purpose was to use the gravity of the largest planet in our solar system to slingshot Cassini towards Saturn, its ultimate destination. But the encounter with Jupiter, Saturn's gas-giant big brother, also gave the Cassini project a perfect lab for testing its instruments and evaluating its operations plans for its tour of the ringed planet, which began in 2004.

Cassini captured some 26,000 images of Jupiter and its moons over six months of continual viewing, creating the most detailed global portrait of Jupiter yet.

While Cassini's images of Jupiter did not have higher resolution than the best from NASA's Voyager mission during its two 1979 flybys, Cassini's cameras had a wider color spectrum than those aboard Voyager, capturing wavelengths of radiation that could probe different heights in Jupiter's atmosphere. The images enabled scientists to watch convective lightning storms evolve over time and helped them understand the heights and composition of these storms and the many clouds, hazes and other types of storms that blanket Jupiter.

The Cassini images also revealed a never-before-seen large, dark oval around 60 degrees north latitude that rivaled Jupiter's Great Red Spot in size. Like the Great Red Spot, the large oval was a giant storm on Jupiter. But, unlike the Great Red Spot, which has been stable for hundreds of years, the large oval showed itself to be quite transient, growing, moving sideways, developing a bright inner core, rotating and thinning over six months. The oval was at high altitude and high latitude, so scientists think the oval may have been associated with Jupiter's powerful auroras.

The imaging team was also able to amass 70-day movies of storms forming, merging and moving near Jupiter's north pole. They showed how larger storms gained energy from swallowing smaller storms, the way big fish eat small fish. The movies also showed how the ordered flow of the eastward and westward jet streams in low latitudes gives way to a more disordered flow at high latitudes.

Meanwhile, Cassini's composite infrared spectrometer was able to do the first thorough mapping of Jupiter's temperature and atmospheric composition. The temperature maps enabled winds to be determined above the cloud tops, so scientists no longer had to rely on tracking features to measure winds. The spectrometer data showed the unexpected presence of an intense equatorial eastward jet (roughly 140 meters per second, or 310 mph) high in the stratosphere, about 100 kilometers (60 miles) above the visible clouds. Data from this instrument also led to the highest-resolution map so far of acetylene on Jupiter and the first detection of organic methyl radical and diacetylene in the auroral hot spots near Jupiter's north and south poles. These molecules are important to understanding the chemical interactions between sunlight and molecules in Jupiter's stratosphere.

As Cassini approached Jupiter, its radio and plasma wave instrument also recorded naturally occurring chirps created by electrons coming from a cosmic sonic boom. The boom occurs when supersonic solar wind - charged particles that fly off the sun - is slowed and deflected around the magnetic bubble surroun ding Jupiter.

Because Cassini arrived at Jupiter while NASA's Galileo spacecraft was still orbiting the planet, scientists were also able to take advantage of near-simultaneous measurements from two different spacecraft. This coincidence enabled scientists to make giant strides in understanding the interaction of the solar wind with Jupiter. Cassini and Galileo provided the first two-point measurement of the boundary of Jupiter's magnetic bubble and showed that it was in the act of contracting as a region of higher solar wind pressure blew on it.

"The Jupiter flyby benefited us in two ways, one being the unique science data we collected and the other the knowledge we gained about how to effectively operate this complex machine," said Bob Mitchell, Cassini program manager based at JPL. "Today, 10 years later, our operations are still heavily influenced by that experience and it is serving us very well."

In celebrating the anniversary of Cassini's visit 10 years ago, scientists are also excited about the upcoming and proposed missions to the Jupiter system, including NASA's Juno spacecraft, to be launched next August, and the Europa Jupiter System Mission, which has been given a priority by NASA.

The Cassini-Huygens mission is a cooperative project of NASA, the European Space Agency and the Italian Space Agency. JPL, a division of the California Institute of Technology in Pasadena, Calif., manages the mission for NASA's Science Mission Directorate, Washington, D.C. The Cassini orbiter and its two onboard cameras were designed, developed and assembled at JPL. The imaging team is based at the Space Science Institute in Boulder, Colo. The composite infrared spectrometer team is based at NASA's Goddard Space Flight Center, Greenbelt, Md., where the instrument was built. The radio and plasma wave science team is based at the University of Iowa, Iowa City, where the instrument was built.
Intriguing radio waves near Jupiter collected by Cassini