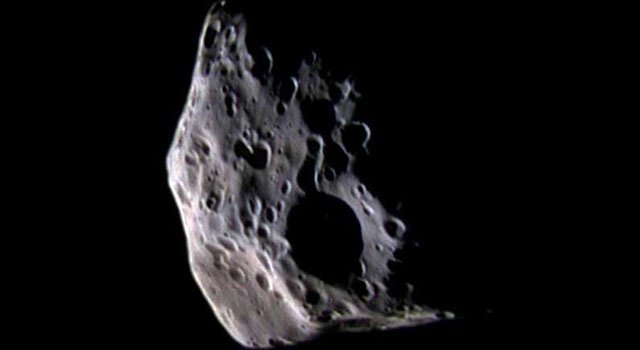 The color of Epimetheus in this view appears to vary in a non-uniform way across the different facets of the moon's irregular surface.

An image of Saturn's small moon, Epimetheus (epp-ee-MEE-thee-uss), was captured by the Cassini spacecraft in the closest view ever taken of the pockmarked body.

An image of Saturn's small moon, Epimetheus (epp-ee-MEE-thee-uss), was captured by the Cassini spacecraft in the closest view ever taken of the pockmarked body.

Epimetheus is irregularly shaped and dotted with soft-edged craters. The many large, softened craters on Epimetheus indicate a surface that is several billion years old. The moon shares an orbit with another of Saturn's small moons, Janus. The two dance in a planetary tango as they move in almost identical orbits, exchanging orbits every four years, instead of colliding. Both play a role in creating intricate waves in Saturn's rings; both have densities significantly lower than that of solid ice, suggesting they may be "rubble piles" held together by gravity. At 116 kilometers (72 miles) across, Epimetheus is slightly smaller than Janus at 181 kilometers (113 miles) across. Spectra of Epimetheus from the Cassini visual infrared mapping spectrometer indicate that the moon is mostly water ice.

The images for this false color composite were obtained with the Cassini spacecraft narrow-angle camera on March 30, 2005, at a distance of approximately 74,600 kilometers (46,350 miles) from Epimetheus.

The Cassini-Huygens mission is a cooperative project of NASA, the European Space Agency and the Italian Space Agency. The Jet Propulsion Laboratory, a division of the California Institute of Technology in Pasadena, manages the Cassini-Huygens mission for NASA's Science Mission Directorate, Washington, D.C. The Cassini orbiter and its two onboard cameras were designed, developed and assembled at JPL. The imaging team is based at the Space Science Institute, Boulder, Colo.
+ Cassini home page
+ Latest Cassini news
+ Full image and caption