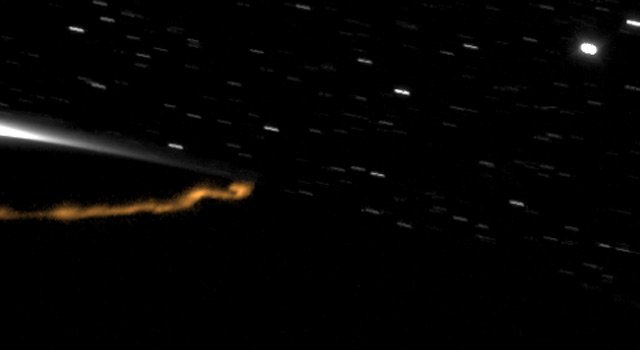 In the first video showing the auroras above the northern latitudes of Saturn, Cassini has spotted the tallest known "northern lights" in the solar system, flickering in shape and brightness high above the ringed planet.

PASADENA, Calif. - In the first video showing the auroras above the northern latitudes of Saturn, Cassini has spotted the tallest known "northern lights" in the solar system, flickering in shape and brightness high above the ringed planet.

The new video reveals changes in Saturn's aurora every few minutes, in high resolution, with three dimensions. The images show a previously unseen vertical profile to the auroras, which ripple in the video like tall curtains. These curtains reach more than 1,200 kilometers (750 miles) above the edge of the planet's northern hemisphere.

Auroras occur on Earth, Jupiter, Saturn and a few other planets, and the new images will help scientists better understand how they are generated.

"The auroras have put on a dazzling show, shape-shifting rapidly and exposing curtains that we suspected were there, but hadn't seen on Saturn before," said Andrew Ingersoll of the California Institute of Technology in Pasadena, who is a member of the Cassini imaging team that processed the new video. "Seeing these things on another planet helps us understand them a little better when we see them on Earth."

The speed of the auroral changes in the video is comparable to some of those on Earth, but scientists are still working to understand the processes that produce these rapid changes. The height will also help them learn how much energy is required to light up auroras.

"I was wowed when I saw these images and the curtain," said Tamas Gombosi of the University of Michigan in Ann Arbor, who chairs Cassini's magnetosphere and plasma science working group. "Put this together with the other data Cassini has collected on the auroras so far, and you really get a new science."

Ultraviolet and infrared instruments on Cassini have captured images of and data from Saturn's auroras before, but in these latest images, Cassini's narrow-angle camera was able to capture the northern lights in the visible part of the light spectrum, in higher resolution. The movie was assembled from nearly 500 still pictures spanning 81 hours between Oct. 5 and Oct. 8, 2009. Each picture had an exposure time of two or three minutes. The camera shot pictures from the night side of Saturn.

The images were originally obtained in black and white, and the imaging team highlighted the auroras in false-color orange. The oxygen and nitrogen in Earth's upper atmosphere contribute to the colorful flashes of green, red and even purple in our auroras. But scientists are still working to determine the true color of the auroras at Saturn, whose atmosphere lacks those chemicals.

The Cassini-Huygens mission is a cooperative project of NASA, the European Space Agency and the Italian Space Agency. The Jet Propulsion Laboratory, a division of the California Institute of Technology in Pasadena, manages the mission for the Science Mission Directorate at NASA Headquarters in Washington. The Cassini orbiter and its two onboard cameras were designed, developed and assembled at JPL.  The imaging team is based at the Space Science Institute, Boulder, Colo.