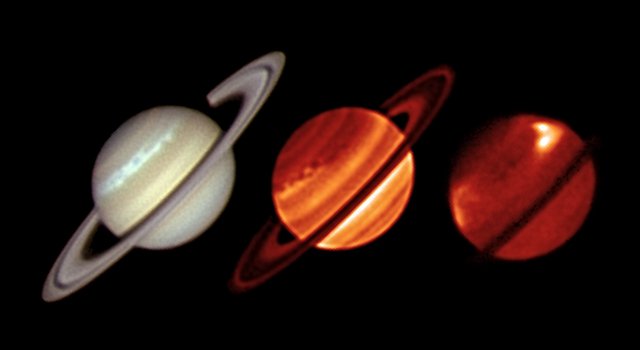 Thermal infrared images of Saturn from the Very Large Telescope Imager and Spectrometer for the mid-Infrared (VISIR) instrument on the European Southern Observatory's Very Large Telescope, on Cerro Paranal, Chile, appear at center and on the right. An amateur visible-light image from Trevor Barry, of Broken Hill, Australia, appears on the left. The images were obtained on Jan. 19, 2011, during the mature phase of the northern storm. The second image is taken at a wavelength that reveals the structures in Saturn's lower atmosphere, showing the churning storm clouds and the central cooler vortex. The third image is sensitive to much higher altitudes in Saturn's normally peaceful stratosphere, where we see the unexpected beacons of infrared emission flanking the central cool region over the storm.› Full image and caption
Credit: ESO/Univ. of Oxford/T. Barry 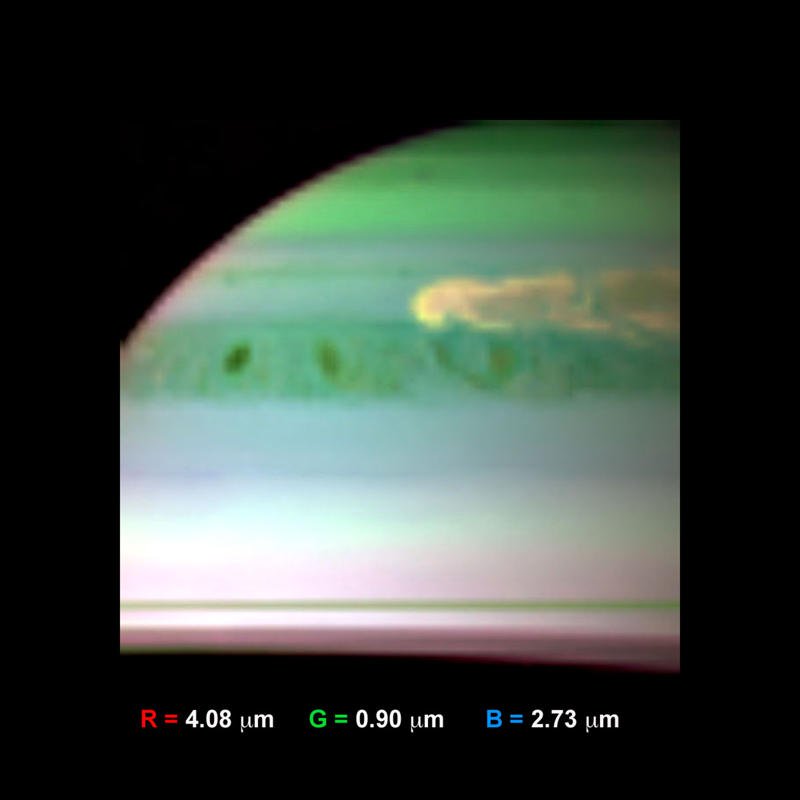 Measurements by NASA's Cassini spacecraft reveal temperatures in a high layer of Saturn's atmosphere known as the stratosphere and show the dramatic effects of the massive storm deep below.› Full image and caption
Credit: NASA/JPL/GSFC/Univ. Oxford

NASA's Cassini spacecraft and a European Southern Observatory ground-based telescope tracked the growth of a giant early-spring storm in Saturn's northern hemisphere that is so powerful it stretches around the entire planet.

PASADENA, Calif. -- NASA's Cassini spacecraft and a European Southern Observatory ground-based telescope tracked the growth of a giant early-spring storm in Saturn's northern hemisphere that is so powerful it stretches around the entire planet. The rare storm has been wreaking havoc for months and shooting plumes of gas high into the planet's atmosphere.

The dramatic effects of the deep plumes disturbed areas high up in Saturn's usually stable stratosphere, generating regions of warm air that shone like bright "beacons" in the infrared. Details are published in this week's edition of Science Magazine.

"Nothing on Earth comes close to this powerful storm," says Leigh Fletcher, the study's lead author and a Cassini team scientist at the University of Oxford in the United Kingdom. "A storm like this is rare. This is only the sixth one to be recorded since 1876, and the last was way back in 1990."

This is the first major storm on Saturn observed by an orbiting spacecraft and studied at thermal infrared wavelengths, where Saturn's heat energy reveals atmospheric temperatures, winds and composition within the disturbance.

The violence of the storm -- the strongest disturbances ever detected in Saturn's stratosphere -- took researchers by surprise. What started as an ordinary disturbance deep in Saturn's atmosphere punched through the planet's serene cloud cover to roil the high layer known as the stratosphere.

"On Earth, the lower stratosphere is where commercial airplanes generally fly to avoid storms which can cause turbulence," says Brigette Hesman, a scientist at the University of Maryland in College Park who works on the CIRS team at Goddard and is the second author on the paper. "If you were flying in an airplane on Saturn, this storm would reach so high up, it would probably be impossible to avoid it."

Other indications of the storm's strength are the changes in the composition of the atmosphere brought on by the mixing of air from different layers. CIRS found evidence of such changes by looking at the amounts of acetylene and phosphine, both considered to be tracers of atmospheric motion. A separate analysis using Cassini's visual and infrared mapping spectrometer, led by Kevin Baines of JPL, confirmed the storm is very violent, dredging up larger atmospheric particles and churning up ammonia from deep in the atmosphere in volumes several times larger than previous storms. Other Cassini scientists are studying the evolving storm, and a more extensive picture will emerge soon.

The Cassini-Huygens mission is a cooperative project of NASA, the European Space Agency and the Italian Space Agency. The mission is managed by JPL for NASA's Science Mission Directorate in Washington. The European Southern Observatory in Garching, Germany operates the VLT in Chile. JPL is a division of the California Institute of Technology in Pasadena.