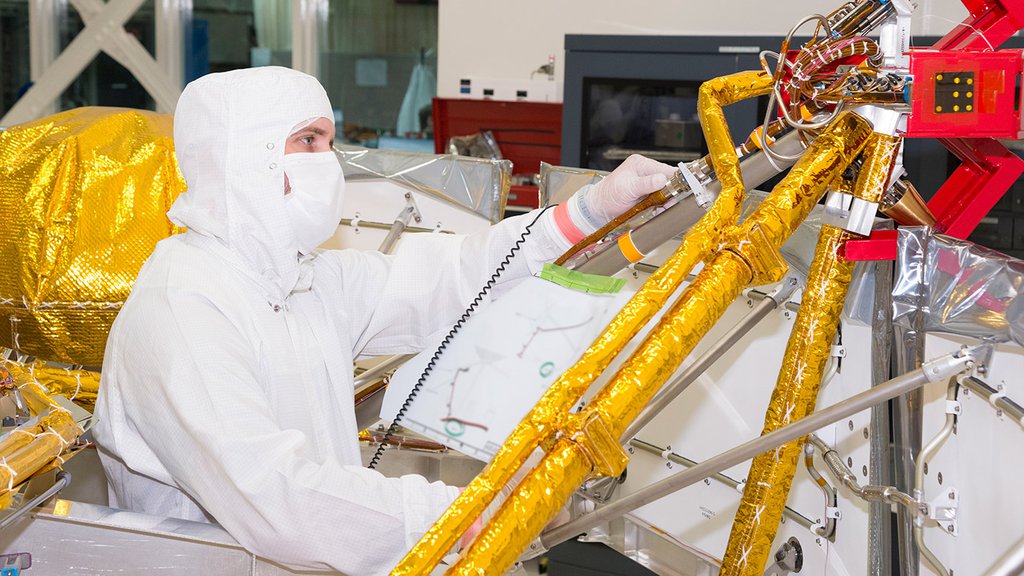 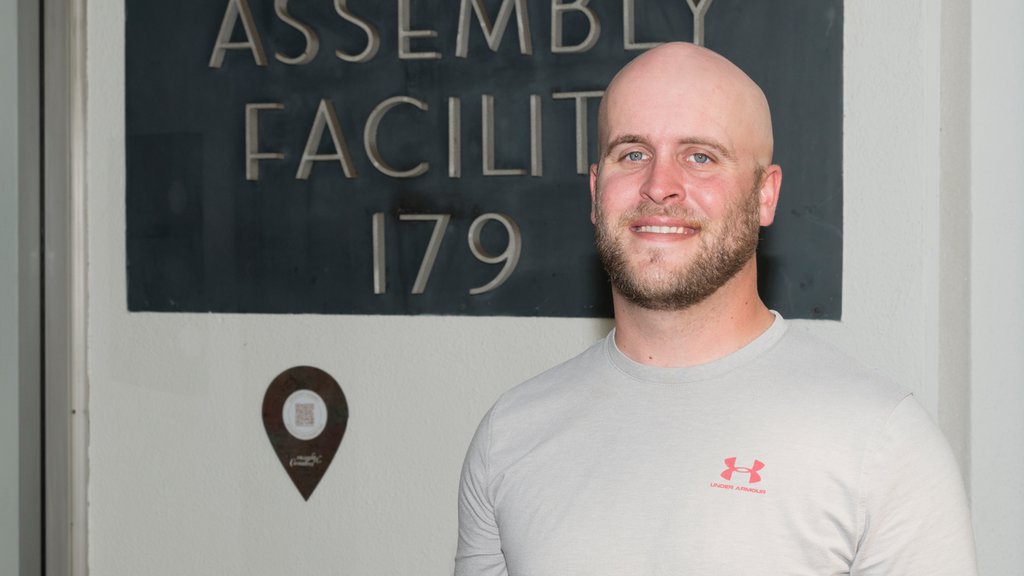 James Bailey outside the Spacecraft Assembly Facility, where he works as a flight technician on Mars 2020.
Credit: NASA/JPL-Caltech 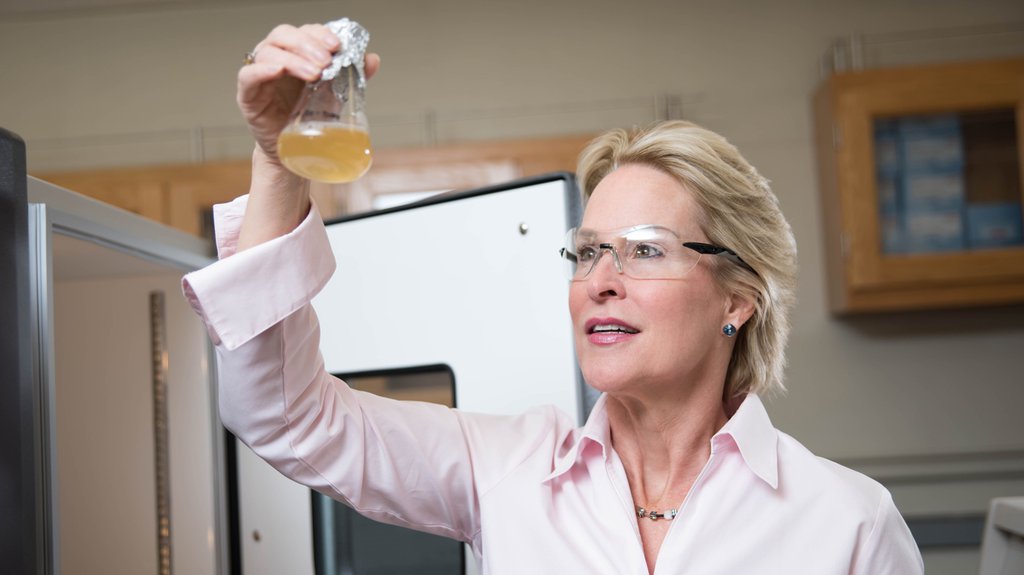 They took different paths to their science/tech careers: she with academia and research, he with vocational training and military service as a Blackhawk helicopter mechanic.

"What the heck does Mom want? Oh, Mom probably doesn't understand the time difference, she's in Dallas right now and is probably still thinking it's California time...maybe she just wants me to go check on her cats..." A litany of mundane explanations ran through James Bailey's bleary mind at 3:23 a.m. on October 3 when he was awakened from a deep sleep by three phone calls from his mother's cell number. Bailey silenced his phone for the first two, getting grumpier with each ring. Call #3 did the trick. He picked up the phone and said groggily, "What do you want?" With great excitement and maybe a tinge of impatience, his mother said, "I wish you had picked up your phone, but I just won the Nobel Prize."

Bailey bolted upright, thrilled by the news and fueled by adrenaline. "I was overjoyed for her. It's fairly difficult to verbalize how I feel," he said. He never did manage to go back to sleep that night. In a few hours, he'd be able to share the news with his colleagues when he arrived at his job at NASA's Jet Propulsion Laboratory in Building 179, High Bay 1 -- the clean room where he is a flight technician working on Mars 2020.

Bailey's mother is Frances Arnold, the Linus Pauling Professor of Chemical Engineering at Caltech, which manages JPL for NASA. Her 2018 Nobel Prize in Chemistry honors her pioneering work in creating new, improved enzymes in the laboratory using the principles of evolution. Arnold shares the prize with two other scientists.

Bailey traveled a different path than his mother to his job at JPL. Growing up in Pasadena, he didn't thrive in conventional schools, so he pursued vocational training in welding and machining. After high school, he worked on high-performance cars at a local shop. At 20, he joined the Army, where he was trained as a Blackhawk helicopter mechanic and became part of a flight crew. After wrapping up six years of military service, including crucial work on medical evacuation helicopter teams in Afghanistan, he learned JPL was looking for people with an aviation background to work as flight technicians. Bailey fit the bill, and he was hired.

"If you do something wrong in aviation, lives are at stake, and that same level of detail needs to be taken here, because we send spacecraft that we can't repair, so they have to be perfect the first time," Bailey said.

Eventually, Bailey hopes to continue his education in aerospace and mechanical engineering. After all, engineering and science are a family tradition. In addition to his mother's career, his biological father, James E. Bailey, was a chemistry professor at ETH Zurich, and his stepfather, Andrew Lange, was a Caltech professor of astrophysics. His mother's father was a nuclear engineer, one of her brothers worked on developing microprocessors, and her other brother is a professor who conducts cancer research at Rutgers University.

Bailey has vivid childhood memories of visiting Caltech labs with his parents, which he believes pushed him toward science and mechanics. But he added, "I really think it's genetic." And in his family, that affinity for STEM fields is shared by men and women.

Bailey met a lot of female students and professors through his parents. "When I first heard about the struggles of women and STEM, I was a little surprised, like, 'This is really a thing?' That's because I had a small, biased view of it, being surrounded by brilliant female engineers and professors."

Bailey said that since the Nobel Prize announcement, his mother has received a massive influx of bottles of Champagne, flower deliveries and phone calls, plus group emails from every corner of the family. When Arnold goes to the official Nobel ceremony in Sweden in December, she will be accompanied by her family, and she will bring her graduate students to express gratitude for all they've done and to inspire them to pursue their dreams.

"My mom would want everybody to know that it's a collaboration of everyone to achieve these big goals," Bailey said. He has seen firsthand the value of collaborations in his mother's career and in his own. "The beautiful balance of working here at JPL is that you have some of the most brilliant minds from all backgrounds, whether technical or theoretical, you have the camaraderie of the sharpest technicians and others working with some of the smartest engineers, and they find the perfect balance of making it all work," he explained.

When Bailey is not at work sporting a bunny suit in a clean room, he is mentoring his younger brother who wants to be a machinist, remodeling a house, and restoring classic cars -- a '66 Chevelle and a '71 Blazer.

"I've always got to keep a wrench in my hands, so I work on the rover during the day, and I work on my projects at night, but I need to be mechanically involved," Bailey said.