Bubbling up Organics in an Ocean Vent Simulator 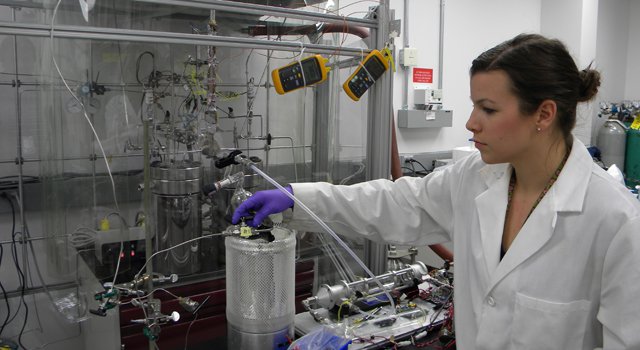 A team of scientists at NASA's Jet Propulsion Laboratory is testing whether organic molecules can be brewed in a simulated ocean vent.› Full image and caption
Credit: NASA/JPL-Caltech 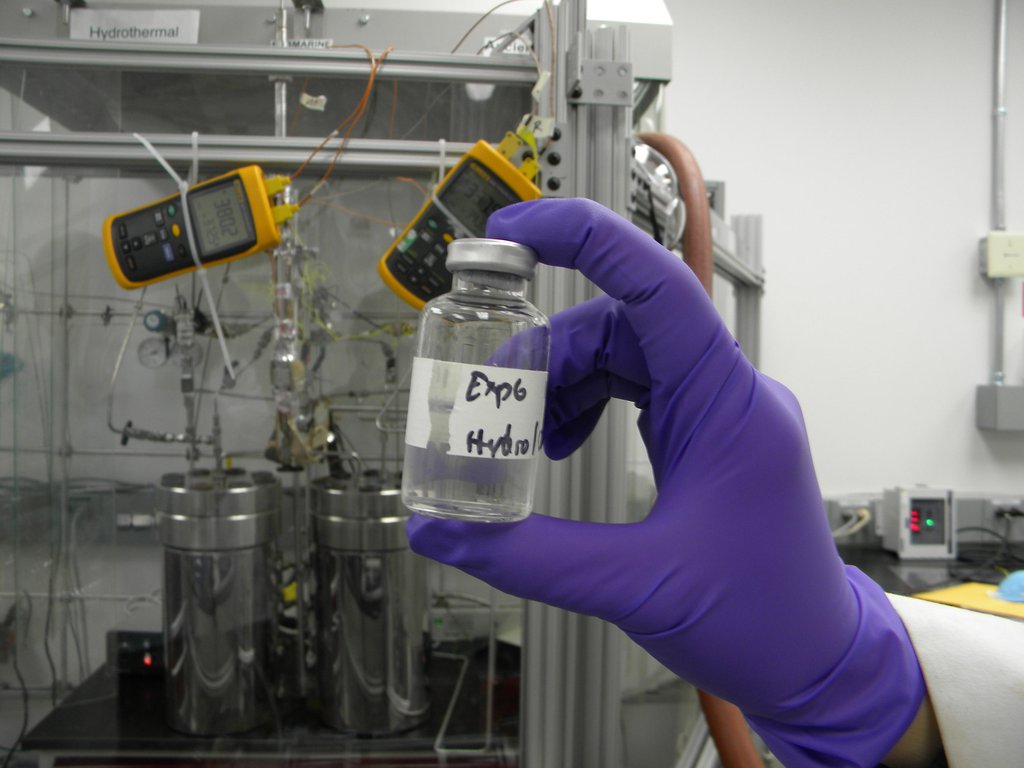 Scientists at NASA's Jet Propulsion Laboratory are collecting samples from a simulated ocean vent to see if they can detect organic molecules being brewed.› Full image and caption
Credit: NASA/JPL-Caltech

This week, scientists at NASA's Jet Propulsion Laboratory are running an experiment simulating a deep ocean hydrothermal vent to test theories about the origins of life.

This week, fizzy ocean water and the alkaline fluid that bubbles up from deep ocean vents are coursing through a structure at NASA's Jet Propulsion Laboratory in Pasadena, Calif. that is reminiscent of the pillared Emerald City in the Wizard of Oz. Scientists with the NASA Astrobiology Institute's JPL Icy Worlds team have built this series of glass tubes, thin barrels and valves with a laser and a detector system. The set-up mimics the conditions at hydrothermal vents at the bottom of Earth's ocean and also detects compounds coming out of it. They want to see if sending these two liquids through a sample of rock that simulates ancient volcanic ocean crust can lead to the formation of simple organic molecules such as ethane and methane, and amino acids, biologically important organic molecules. Scientists have long considered these compounds the precursor ingredients for what later led to chains of RNA, DNA and microbes.

A group of researchers at JPL, including senior geologist Mike Russell, Icy Worlds Principal Investigator Isik Kanik, postdoctoral fellow Laurie Barge, graduate student Lauren White and visiting scholar Takazo Shibuya, have been testing this "origin of life" theory in a refrigerator-sized apparatus at an annex to the Microdevices Laboratory at JPL. The latest segment of the experiment, which is running this week, will track the transformation of carbon molecules into the hydrocarbons methane and ethane. Scientists want to know where the carbon for the organic molecules originates.

"What we're trying to do is to climb down and create the conditions for the very first steps to the beginning of life as we know it," said Russell, who is leading the experiment. "That's the hard part." The experiment is a key component of the Icy Worlds project, which is managed at JPL for the NASA Astrobiology Institute, based at NASA's Ames Research Center, Moffett Field, Calif. The project aims to learn more about potentially habitable environments such as Mars, as well as liquid water environments on icy bodies like Saturn's moon Enceladus and Jupiter's moon Europa. "If this ocean experiment is successful, scientists would have a better handle on where to look for the building blocks of life on Earth and beyond, and what signatures we should be looking for of life and of habitable environments in the solar system," said Kanik.

This experiment has its roots in a theory from Russell in 1989 that moderately warm, alkaline hydrothermal vents at the bottom of the ocean could have hatched life about 4 billion years ago. The ancient ocean at these vents contains carbon dioxide, which provides the supply of carbon that could be reassembled into organic molecules. In 2000, such a vent was discovered at the bottom of the middle of the Atlantic Ocean. The vent later showed signs of generating simple organic molecules.

The scientists have tagged isotopes of carbon dioxide and dissolved them in briny ocean-like water, creating a fizzy sample that would probably taste like salty soda. They made an alkaline solution by dissolving sodium hydroxide in water to simulate the fluids coming out of these kinds of hydrothermal vents. Scientists will alternately send the two solutions through a thin barrel of iron-magnesium-silica-volcanic-type rock that was synthesized by Shibuya, so it doesn't have any of the existing life that would be found in actual ocean crust samples. A tunable diode laser -- a twin of one presently operating on NASA's Mars Curiosity rover -- is used to search for methane, ethane and other volatiles in the solution that flows out.

The experiment runs as close a simulation to the conditions of these hydrothermal vents as is feasible in a lab setting - at 100 times the pressure of Earth's surface and at about 90 degrees Celsius (about 200 degrees Fahrenheit). Scientists are alternating the fluid flows to simulate the circulation at the ocean floor.

Founded in 1998, the NASA Astrobiology Institute is a partnership between NASA, 15 U.S. teams, and six international consortia. NAI's goals are to promote, conduct, and lead interdisciplinary astrobiology research, train a new generation of astrobiology researchers, and share the excitement of astrobiology with learners of all ages. The NAI is part of NASA's Astrobiology program, which supports research into the origin, evolution, distribution and future of life on Earth and the potential for life elsewhere. For more information, visit http://astrobiology.nasa.gov/.