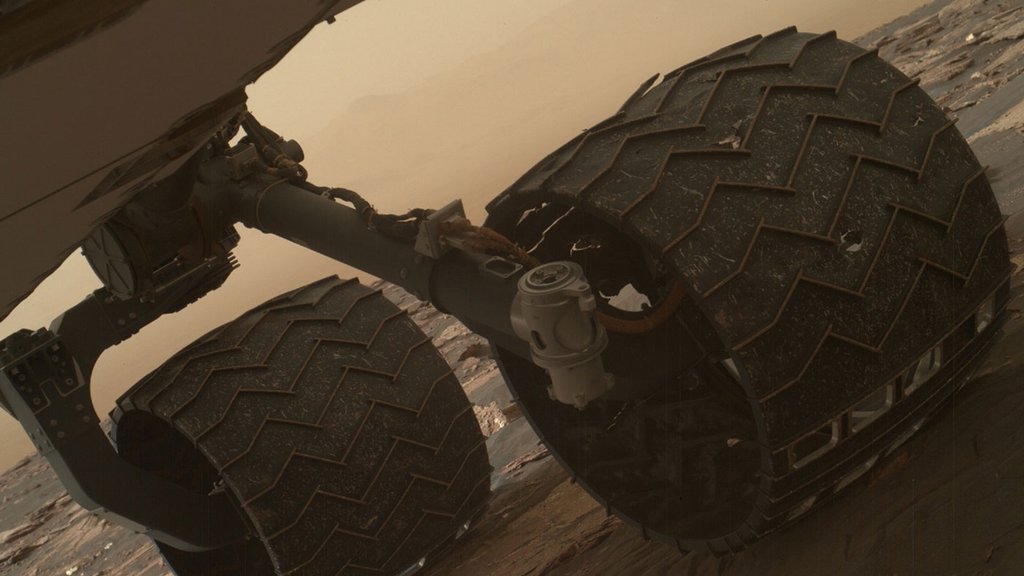 Two of the raised treads, called grousers, on the left middle wheel of NASA's Curiosity Mars rover broke during the first quarter of 2017, including the one seen partially detached at the top of the wheel in this image from the Mars Hand Lens Imager (MAHLI) camera on the rover's arm.› Full image and caption
Credit: NASA/JPL-Caltech/MSSS

The mission's first and second breaks in raised treads, called grousers, appeared in a March 19 image check of the wheels, documenting that these breaks occurred after the last check, on Jan. 27.

"All six wheels have more than enough working lifespan remaining to get the vehicle to all destinations planned for the mission," said Curiosity Project Manager Jim Erickson at NASA's Jet Propulsion Laboratory, Pasadena, California. "While not unexpected, this damage is the first sign that the left middle wheel is nearing a wheel-wear milestone,"

The monitoring of wheel damage on Curiosity, plus a program of wheel-longevity testing on Earth, was initiated after dents and holes in the wheels were seen to be accumulating faster than anticipated in 2013. Testing showed that at the point when three grousers on a wheel have broken, that wheel has reached about 60 percent of its useful life. Curiosity already has driven well over that fraction of the total distance needed for reaching the key regions of scientific interest on Mars' Mount Sharp.

Curiosity Project Scientist Ashwin Vasavada, also at JPL, said, "This is an expected part of the life cycle of the wheels and at this point does not change our current science plans or diminish our chances of studying key transitions in mineralogy higher on Mount Sharp."

The rover is climbing to sequentially higher and younger layers of lower Mount Sharp to investigate how the region's ancient climate changed billions of years ago. Clues about environmental conditions are recorded in the rock layers. During its first year on Mars, the mission succeeded at its main goal by finding that the region once offered environmental conditions favorable for microbial life, if Mars has ever hosted life. The conditions in long-lived ancient freshwater Martian lake environments included all of the key chemical elements needed for life as we know it, plus a chemical source of energy that is used by many microbes on Earth.

Through March 20, Curiosity has driven 9.9 miles (16.0 kilometers) since the mission's August 2012 landing on Mars. Studying the transition to the sulfate unit, the farthest-uphill destination, will require about 3.7 miles (6 kilometers) or less of additional driving. For the past four years, rover drive planners have used enhanced methods of mapping potentially hazardous terrains to reduce the pace of damage from sharp, embedded rocks along the rover's route.

Each of Curiosity's six wheels is about 20 inches (50 centimeters) in diameter and 16 inches (40 centimeters) wide, milled out of solid aluminum. The wheels contact ground with a skin that's about half as thick as a U.S. dime, except at thicker treads. The grousers are 19 zigzag-shaped treads that extend about a quarter inch (three-fourths of a centimeter) outward from the skin of each wheel. The grousers bear much of the rover's weight and provide most of the traction and ability to traverse over uneven terrain.