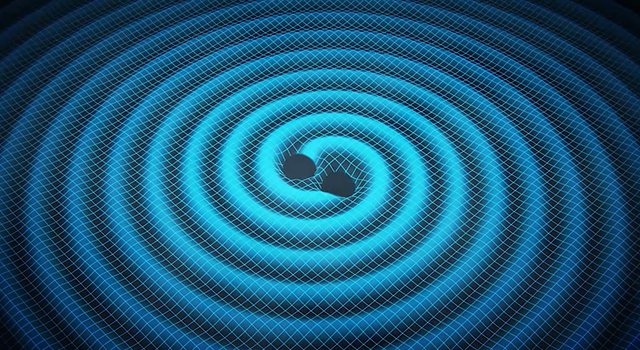 Merging black holes ripple space and time in this artist's concept. Pulsar-timing arrays -- networks of the pulsing cores of dead stars -- are one strategy for detecting these ripples, or gravitational waves, thought to be generated when two supermassive black holes merge into one.
Credit: Swinburne Astronomy Productions 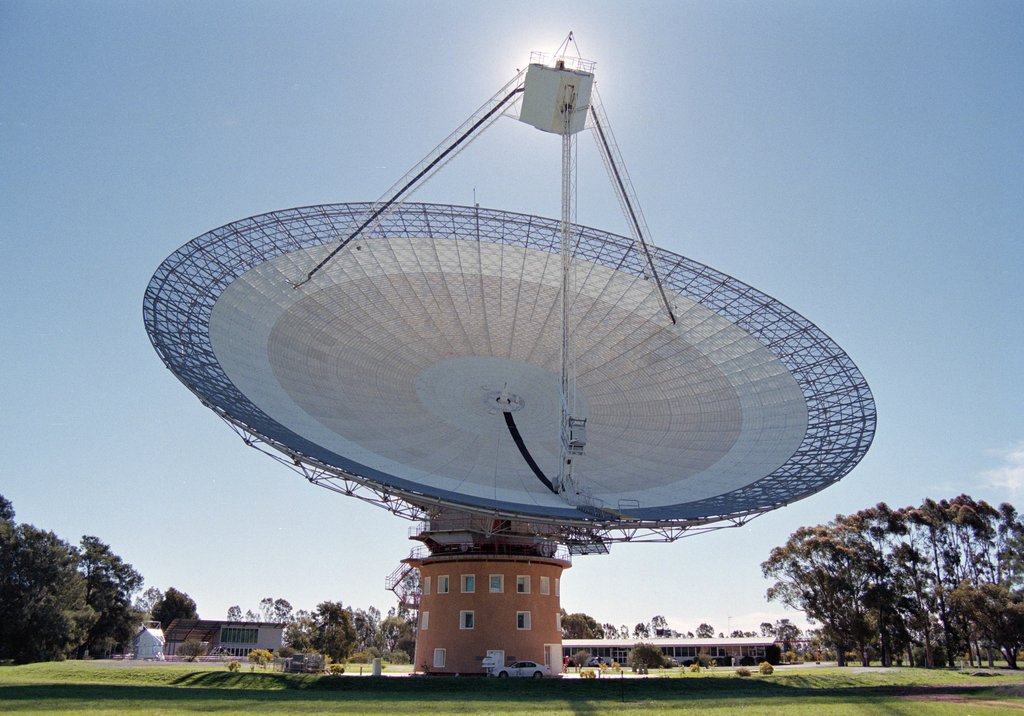 When black holes merge, they send gravitational waves rippling through space and time. By not detecting these waves, astronomers are learning about black hole evolution.

Throughout our universe, tucked inside galaxies far, far away, giant black holes are pairing up and merging. As the massive bodies dance around each other in close embraces, they send out gravitational waves that ripple space and time themselves, even as the waves pass right through our planet Earth.

Scientists know these waves, predicted by Albert Einstein's theory of relativity, exist but have yet to directly detect one. In the race to catch the waves, one strategy -- called pulsar-timing arrays -- has reached a milestone not through detecting any gravitational waves, but in revealing new information about the frequency and strength of black hole mergers.

"We expect that many gravitational waves are passing through us all the time, and now we have a better idea of the extent of this background activity," said Sarah Burke-Spolaor, co-author of a new Science paper published Oct. 18, which describes research she contributed to while based at NASA's Jet Propulsion Laboratory in Pasadena, Calif. Burke-Spolaor is now at the California Institute of Technology in Pasadena.

Gravitational waves, if detected, would reveal more information about black holes as well as one of the four fundamental forces of nature: gravity.

The team's inability to detect any gravitational waves in the recent search actually has its own benefits, because it reveals new information about supermassive black hole mergers -- their frequency, distance from Earth and masses. One theory of black hole growth to hit the theorists' cutting room floors had stated that mergers alone are responsible for black holes gaining mass.

The results come from the Commonwealth Scientific and Industrial Research Organization's (CSIRO) Parkes radio telescope in eastern Australia. The study was jointly led by Ryan Shannon of CSIRO, and Vikram Ravi, of the University of Melbourne and CSIRO.

Pulsar-timing arrays are designed to catch the subtle gravitational waves using telescopes on the ground, and spinning stars called pulsars. Pulsars are the burnt-out cores of exploded stars that send out beams of radio waves like lighthouse beacons. The timing of the pulsars' rotation is so precise that researchers say they are akin to atomic clocks.

When gravitational waves pass through an array of multiple pulsars, 20 in the case of the new study, they set the pulsars bobbing like buoys. Researchers recording the radio waves from the pulsars can then piece together the background hum of waves.

"The gravitational waves cause the space between Earth and pulsars to stretch and squeeze," said Burke-Spolaor.

The new study used the Parkes Pulsar Timing Array, which got its start in the 1990s. According to the research team, the array, at its current sensitivity, will be able to detect a gravitational wave within 10 years.

Researchers at JPL are currently developing a similar precision pulsar-timing capability for NASA's Deep Space Network, a system of large dish antennas located around Earth that tracks and communicates with deep-space spacecraft. During gaps in the network's tracking schedules, the antennas can be used to precisely measure the timing of pulsars' radio waves. Because the Deep Space Network's antennas are distributed around the globe, they can see pulsars across the whole sky, which improves sensitivity to gravitational waves.

The ground-based LIGO observatory is based in Louisiana and Washington. It is a joint project of Caltech and the Massachusetts Institute of Technology, Cambridge, Mass., with funding from the National Science Foundation. The European Space Agency is developing the space-based LISA Pathfinder (Laser Interferometer Space Antenna), a proof-of-concept mission for a future space observatory to detect gravitational waves. LIGO, LISA and pulsar-timing arrays would all detect different frequencies of gravitational waves and thus are sensitive to various types of merger events.

A video about the new Parkes findings from Swinburne University of Technology in Melbourne, Australia, is online at: http://astronomy.swin.edu.au/production/blackhole/ .