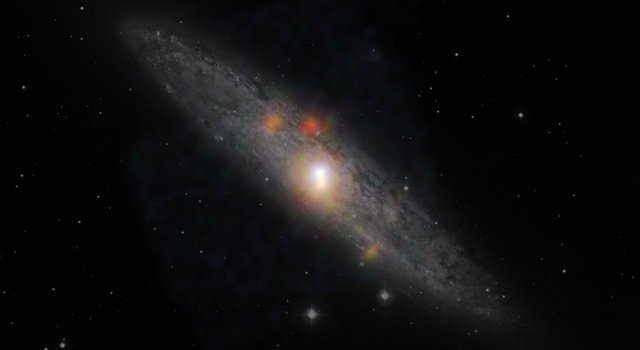 The Sculptor galaxy is seen in a new light, in this composite image from NASA's Nuclear Spectroscopic Telescope Array (NuSTAR) and the European Southern Observatory in Chile.› Full image and caption
Credit: NASA/JPL-Caltech/JHU

NASA's NuSTAR space telescope has found evidence of a slumbering massive black hole in a galaxy bursting with new stars.

Nearly a decade ago, NASA's Chandra X-ray Observatory caught signs of what appeared to be a black hole snacking on gas at the middle of the nearby Sculptor galaxy. Now, NASA's Nuclear Spectroscopic Telescope Array (NuSTAR), which sees higher-energy X-ray light, has taken a peek and found the black hole asleep.

"Our results imply that the black hole went dormant in the past 10 years," said Bret Lehmer of the Johns Hopkins University, Baltimore, and NASA's Goddard Space Flight Center, Greenbelt, Md. "Periodic observations with both Chandra and NuSTAR should tell us unambiguously if the black hole wakes up again. If this happens in the next few years, we hope to be watching." Lehmer is lead author of a new study detailing the findings in the Astrophysical Journal.

The slumbering black hole is about 5 million times the mass of our sun. It lies at the center of the Sculptor galaxy, also known as NGC 253, a so-called starburst galaxy actively giving birth to new stars. At 13 million light-years away, this is one of the closest starbursts to our own galaxy, the Milky Way.

The Milky Way is all around more quiet than the Sculptor galaxy. It makes far fewer new stars, and its behemoth black hole, about 4 million times the mass of our sun, is also snoozing.

"Black holes feed off surrounding accretion disks of material. When they run out of this fuel, they go dormant," said co-author Ann Hornschemeier of Goddard. "NGC 253 is somewhat unusual because the giant black hole is asleep in the midst of tremendous star-forming activity all around it."

Chandra first observed signs of what appeared to be a feeding supermassive black hole at the heart of the Sculptor galaxy in 2003. As material spirals into a black hole, it heats up to tens of millions of degrees and glows in X-ray light that telescopes like Chandra and NuSTAR can see.

Then, in September and November of 2012, Chandra and NuSTAR observed the same region simultaneously. The NuSTAR observations -- the first-ever to detect focused, high-energy X-ray light from the region -- allowed the researchers to say conclusively that the black hole is not accreting material. NuSTAR launched into space in June of 2012.

In other words, the black hole seems to have fallen asleep. Another possibility is that the black hole was not actually awake 10 years ago, and Chandra observed a different source of X-rays. Future observations with both telescopes may solve the puzzle.

"The combination of coordinated Chandra and NuSTAR observations is extremely powerful for answering questions like this," said Lou Kaluzienski, NuSTAR Program Scientist at NASA Headquarters in Washington. "Now, we can get all sides of the story."

The observations also revealed a smaller, flaring object that the researchers were able to identify as an "ultraluminous X-ray source," or ULX. ULXs are black holes feeding off material from a partner star. They shine more brightly than typical stellar-mass black holes generated from dying stars, but are fainter and more randomly distributed than the supermassive black holes at the centers of massive galaxies. Astronomers are still working to understand the size, origins and physics of ULXs.

"These stellar-mass black holes are bumping along near the center of this galaxy," said Hornschemeier. "They tend to be more numerous in areas where there is more star-formation activity."

If and when the Sculptor's slumbering giant does wake up in the next few years amidst all the commotion, NuSTAR and Chandra will monitor the situation. The team plans to check back on the system periodically.