Black Hole Fireworks in Nearby Galaxy 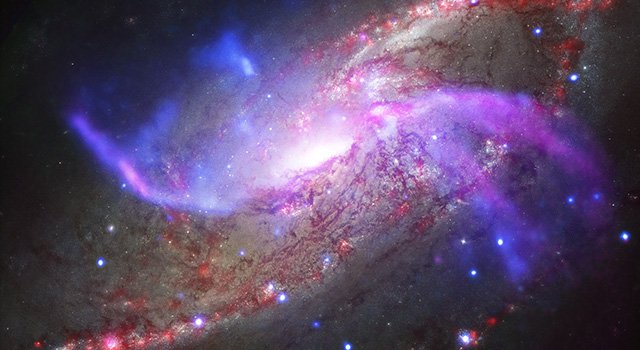 A galaxy about 23 million light-years away is the site of impressive, ongoing, fireworks. Rather than paper, powder, and fire, this galactic light show involves a giant black hole, shock waves, and vast reservoirs of gas.› Full image and caption
Credit: NASA/CXC/JPL-Caltech/STScI/NSF/NRAO/VLA 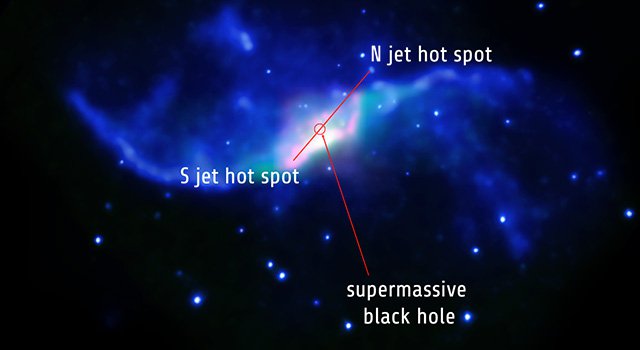 "Fireworks" in a nearby galaxy are driving away its star-making fuel.

Celebrants this Fourth of July will enjoy the dazzling lights and booming shock waves from the explosions of fireworks. A similarly styled event is taking place in the galaxy Messier 106, as seen by NASA's Spitzer Space Telescope, Chandra X-ray Observatory and the Herschel Space Observatory. Herschel is a European Space Agency mission with important NASA contributions.

Energetic jets, which blast from Messier 106's central black hole, are heating up material in the galaxy and thus making it glow, like the ingredients in a firework. The jets also power shock waves that are driving gases out of the galaxy's interior.

Those gases constitute the fuel for churning out new stars. A new study estimates the shock waves have already warmed and ejected two-thirds of the gas from the center of Messier 106. With a reduced ability to birth new stars, Messier 106 appears to be transitioning into a barren, so-called lenticular galaxy full of old, red stars. Lenticular galaxies are flat disks without prominent spiral arms.

"Jets from the supermassive black hole at the center of Messier 106 are having a profound influence on the available gas for making stars in this galaxy," said Patrick Ogle, an astrophysicist at the Infrared Processing and Analysis Center at the California Institute of Technology in Pasadena, and lead author of a new paper describing the results. "This process may eventually transform the spiral galaxy Messier 106 into a lenticular galaxy, depriving it of the raw material to form stars."

Many galaxies contain a central black hole that actively "feeds" upon nearby gas. Some of the material, as it draws toward the black hole, dramatically speeds up and violently spews out as twin jets near the black hole's poles. As one of the Milky Way's closest galactic neighbors, Messier 106 offers a great opportunity for investigating these high-powered jets. Messier 106 -- also known as NGC 4258 -- is 23.5 million light-years distant, and visible with binoculars in the constellation Canes Venatici.

For the new study, researchers used data obtained with the Spitzer infrared telescope before the observatory ran out of coolant in 2009, as planned. The data amount to a map of the infrared light emitted by heated-up hydrogen molecules in Messier 106. The warmed hydrogen is a signature of the jet from the central black hole energizing the surrounding disk of the galaxy.

Specifically, Spitzer saw warmed hydrogen in the two mysterious spiral arms for which Messier 106 is famous. These arms are not like the usual, star-filled spiral arms found in spiral galaxies, such as our Milky Way. In previous research with Spitzer and Chandra, researchers discovered that twin jets from the black hole spawned the anomalous arms, which contain gas heated to millions of degrees that shines in X-rays, detected by Chandra.

In the inner portions of the anomalous spiral arms, the Spitzer infrared images have revealed the equivalent of 10 million times the mass of the sun of molecular hydrogen heated to between about minus 20 and 1,400 degrees Fahrenheit (minus 28 and 760 degrees Celsius) by the shock waves. Without the shock waves, this gas would be colder, likely a few hundred degrees below zero, Fahrenheit.

From a direct comparison of the Chandra and Spitzer images, Ogle and colleagues saw that there is a close connection between the gas that is shocked to millions of degrees, seen by Chandra, and the bulk of denser hydrogen gas heated to hundreds of degrees, seen by Spitzer. The jet is surrounded by a cocoon of superhot gas, which drives shock waves into the surrounding molecular hydrogen gas, like a firework popping off. The molecular hydrogen then heats up, emits infrared light that Spitzer records, and is cast out of the galaxy's gas-strewn interior.

The Herschel observations, meanwhile, pinned down the heat radiating from dust grains that are mixed in with the galaxy's shock-heated gas. "A relatively large amount of molecular gas emission compared to dust emission confirms that shock-driven turbulence from the black hole jets is heating the molecular gas," said paper co-author Philip Appleton of the NASA Herschel Science Center at Caltech.

Spitzer and Herschel were also able to gauge the level of star-making activity in Messier 106's central region. The little gas left there supports a paltry star-formation rate of only 0.08 solar, or sun-equivalent, masses per year (a robust pace runs to about three solar masses per year). The star-formation rate in Messier 106's inner quarters will continue to decline until the jets have ejected all of the gas from the center of the galaxy, turning Messier 106 into an over-the-hill lenticular galaxy.

"Our results demonstrate that these black hole jets can have a significant impact on the evolution of their host galaxies, eventually sterilizing them and making them bereft of the gas needed to form new stars," said Ogle.

NASA's Jet Propulsion Laboratory, Pasadena, California, manages the Spitzer Space Telescope mission for NASA's Science Mission Directorate, Washington. In 2009, the telescope began its "warm" mission, which takes advantage of the still-working, shortest-wavelength infrared channels on the observatory. Science operations are conducted at the Spitzer Science Center at Caltech. Spacecraft operations are based at Lockheed Martin Space Systems Company, Littleton, Colorado. Data are archived at the Infrared Science Archive housed at the Infrared Processing and Analysis Center at Caltech. Caltech manages JPL for NASA.