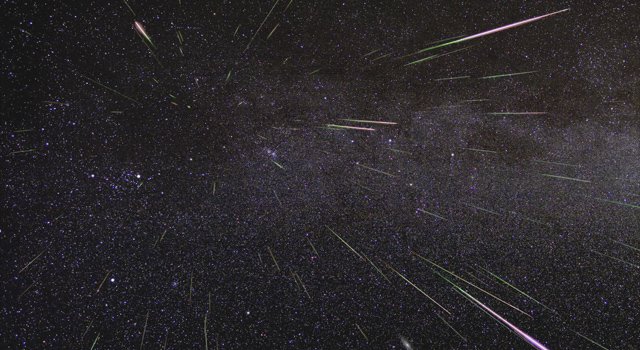 The Perseid meteor shower lights up the sky in August. Star-gazers can expect a similar view during December's Geminid meteor shower, which will be visible in the late evening hours of December 13 and 14.
Credit: NASA/JPL

Bundle up and get ready to watch a fiery lightshow stirred up by dead comets in Earth's upper atmosphere during the cold of winter in the dead of night.

Bundle up and get ready to watch a fiery lightshow stirred up by dead comets in Earth's upper atmosphere during the cold of winter in the dead of night. The annual Geminid meteor shower is expected to peak mid-December. Considered one of the more reliable showers by those in the meteor-watching business, the Geminids almost always put on a great show.

"You could expect to see over 100 meteors per hour during the peak viewing," said Don Yeomans, manager of NASA's Near-Earth Object Office at NASA's Jet Propulsion Laboratory in Pasadena, Calif. "During the late evening hours of December 13, look for streaks of light radiating from a point near the star Castor in the constellation of Gemini, which will be high above the eastern horizon for mid-northern latitudes."

While a sign of the zodiac may have provided the name for the meteor shower, scientists have established the source as something more tangible. "We do know that the origin of the Geminids is a Near-Earth object called 3200 Phaeton," said Yeomans. "It is probably the remains of a comet that has burned off its ices after eons looping throughout the solar system. Phaeton has a trail of pebble and dust-sized debris that stream out behind it. Once every mid-December, Earth's orbit carries it into this stream of debris."

Since all other meteors showers are due to the sand-sized particles from active comets, it seems reasonable to assume that Phaeton is, or at least was, a comet. However, Phaeton has shown no cometary activity, so it is classified as an asteroid - the only asteroid to have an associated meteor shower.

"It is important to note that the orbits of Earth and Phaethon itself will not intersect," added Yeomans. "There is no chance the two will meet. But the result of our planet flying through its debris field is an opportunity for science and the chance to see Mother Nature at her best."

This year the peak of the Geminids is expected the night of December 13/14 (9:10 pm PST/12:10 am EST/05:10 UT), coinciding with a nearly perfect new moon. Many tens of meteors per hour will be visible in the few nights surrounding those dates. More information on the observing conditions is at: http://science.nasa.gov/headlines/y2009/08dec_geminids.htm.