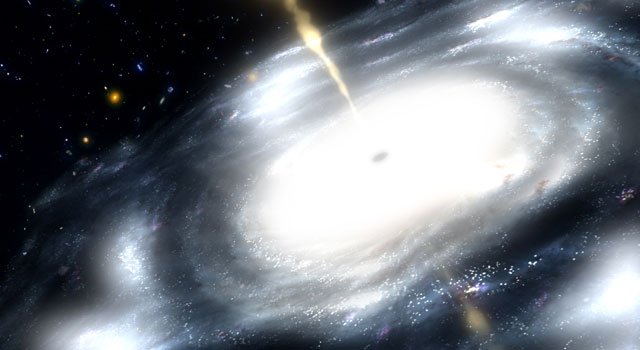 This artist's concept shows a galaxy with a supermassive black hole at its core. The black hole is shooting out jets of radio waves.› Full image and caption
Credit: NASA/JPL-Caltech

Going against the grain may turn out to be a powerful move for black holes.

PASADENA, Calif. – Going against the grain may turn out to be a powerful move for black holes. New research suggests supermassive black holes that spin backwards might produce more ferocious jets of gas. The results have broad implications for how galaxies change over time.

"A lot of what happens in an entire galaxy depends on what's going on in the miniscule central region where the black hole lies," said theoretical astrophysicist David Garofalo of NASA's Jet Propulsion Laboratory in Pasadena, Calif. Garofalo is lead author of a new paper that appeared online May 27 in the Monthly Notices of the Royal Astronomical Society. Other authors are Daniel A. Evans of the Massachusetts Institute of Technology, Cambridge, Mass., and Rita M. Sambruna of NASA Goddard Space Flight Center, Greenbelt, Md.

Black holes are immense distortions of space and time with gravity that is so great, even light itself cannot escape. Astronomers have known for more than a decade that all galaxies, including our own Milky Way, are anchored by tremendous, so-called supermassive black holes, containing billions of suns' worth of mass. The black holes are surrounded and nourished by disks of gas and dust, called accretion disks. Powerful jets stream out from below and above the disks like lasers, and fierce winds blow off from the disks themselves.

Garofalo and his colleagues have been busy flipping the model on its head. In previous papers, they proposed that the backward, or retrograde, black holes spew the most powerful jets, while the prograde black holes have weaker or no jets.

The new study links the researchers' theory with observations of galaxies across time, or at varying distances from Earth. They looked at both "radio-loud" galaxies with jets, and "radio-quiet" ones with weak or no jets. The term "radio" comes from the fact that these particular jets shoot out beams of light mostly in the form of radio waves.

"This new model also solves a paradox in the old spin paradigm," said David Meier, a theoretical astrophysicist at JPL not involved in the study. "Everything now fits nicely into place."

The scientists say that the backward black holes shoot more powerful jets because there's more space between the black hole and the inner edge of the orbiting disk. This gap provides more room for the build-up of magnetic fields, which fuel the jets, an idea known as the Reynold's conjecture after the theoretical astrophysicist Chris Reynolds of the University of Maryland, College Park.

"If you picture yourself trying to get closer to a fan, you can imagine that moving in the same rotational direction as the fan would make things easier," said Garofalo. "The same principle applies to these black holes. The material orbiting around them in a disk will get closer to the ones that are spinning in the same direction versus the ones spinning the opposite way."

Jets and winds play key roles in shaping the fate of galaxies. Some research shows that jets can slow and even prevent the formation of stars not just in a host galaxy itself, but also in other nearby galaxies.

"Jets transport huge amounts of energy to the outskirts of galaxies, displace large volumes of the intergalactic gas, and act as feedback agents between the galaxy's very center and the large-scale environment," said Sambruna. "Understanding their origin is of paramount interest in modern astrophysics."