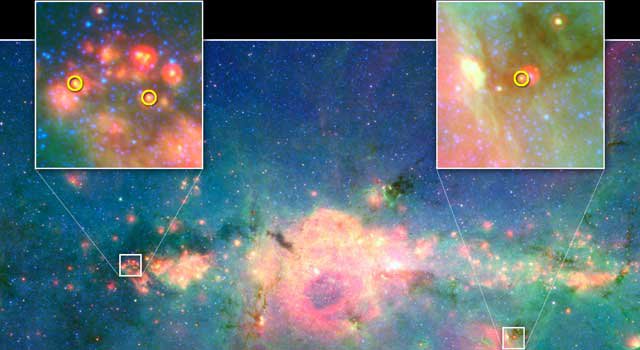 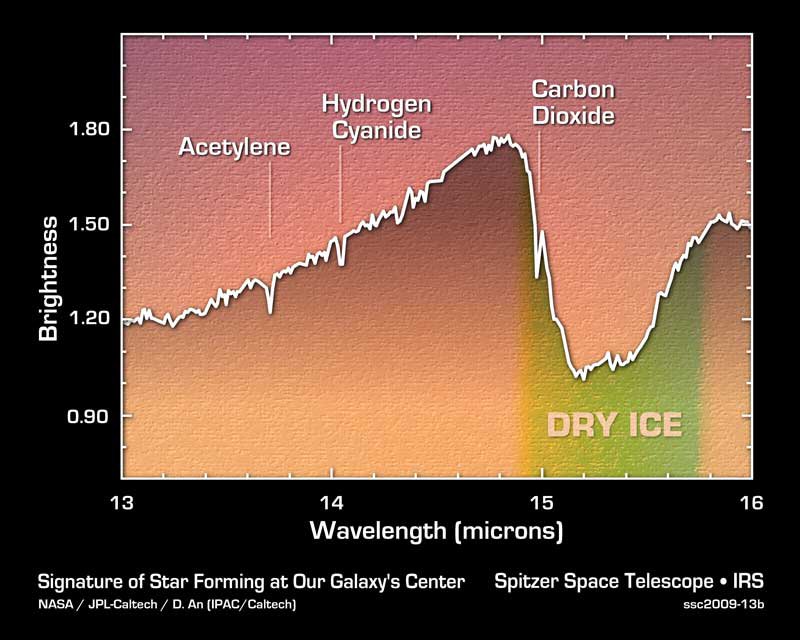 These data from NASA's Spitzer Space Telescope reveal a newborn star at the center of our Milky Way.› Full image and caption
Credit: NASA/JPL-Caltech

Astronomers have at last uncovered newborn stars at the frenzied center of our Milky Way galaxy.

PASADENA, Calif. -- Astronomers have at last uncovered newborn stars at the frenzied center of our Milky Way galaxy. The discovery was made using the infrared vision of NASA's Spitzer Space Telescope.

The heart of our spiral galaxy is cluttered with stars, dust and gas, and at its very center, a supermassive black hole. Conditions there are harsh, with fierce stellar winds, powerful shock waves and other factors that make it difficult for stars to form. Astronomers have known that stars can form in this chaotic place, but they're baffled as to how this occurs. Confounding the problem is all the dust standing between us and the center of our galaxy. Until now, nobody had been able to definitively locate any baby stars.

"These stars are like needles in a haystack," said Solange Ramirez, the principal investigator of the research program at NASA's Exoplanet Science Institute at the California Institute of Technology, Pasadena. "There's no way to find them using optical light, because dust gets in the way. We needed Spitzer's infrared instruments to cut through the dust and narrow in on the objects."

The team plans to look for additional baby stars in the future, and ultimately to piece together what types of conditions allow stars to form in such an inhospitable environment as our galaxy's core.

"By studying individual stars in the galactic center, we can better understand how stars are formed in different interstellar environments," said Deokkeun An of the Infrared Processing and Analysis Center at Caltech, lead author of a paper submitted for publication in the Astrophysical Journal. "The Milky Way galaxy is just one of more than hundreds of billions of galaxies in the visible universe. However, our galaxy is so special because we can take a closer look at its individual stellar components." An started working on this program while a graduate student at Ohio State University, Columbus, under the leadership of Ohio State astronomer Kris Sellgren, the co-investigator on the project.

The core of the Milky Way is a mysterious place about 600 light-years across (light would take 600 years to travel from one end to the other). While this is just a fraction of the size of the entire Milky Way, which is about 100,000 light-years across, the core is stuffed with 10 percent of all the gas in the galaxy -- and loads and loads of stars.

Before now, there were only a few clues that stars can form in the galaxy's core. Astronomers had found clusters of massive adolescent stars, in addition to clouds of charged gas -- a sign that new stars are beginning to ignite and ionize surrounding gas. Past attempts had been unsuccessful in finding newborn stars, or as astronomers call them, young stellar objects.

Ramirez and colleagues began their search by scanning large Spitzer mosaics of our galactic center. They narrowed in on more than 100 candidates, but needed more detailed data to confirm the stars' identities. Young stellar objects, when viewed from far away, can look a lot like much older stars. Both types of stars are very dusty, and the dust lying between us and them obscures the view even further.

To sort through the confusion, the astronomers looked at their candidate stars with Spitzer's spectrograph – an instrument that breaks light apart to reveal its rainbow-like array of infrared colors. Molecules around stars leave imprints in their light, which the spectrograph can detect.

The results revealed three stars with clear signs of youth, for example, certain warm, dense gases. These youthful features are found in other places in the galaxy where stars are being formed.

"It is amazing to me that we have found these stars," said Ramirez. "The galactic center is a very interesting place. It has young stars, old stars, black holes, everything. We started mining a catalog of about 1 million sources and managed to find three young stars -- stars that will help reveal the secrets at the core of the Milky Way."

The young stellar objects are all less than about 1 million years old. They are embedded in cocoons of gas and dust, which will eventually flatten to disks that, according to theory, later lump together to form planets.