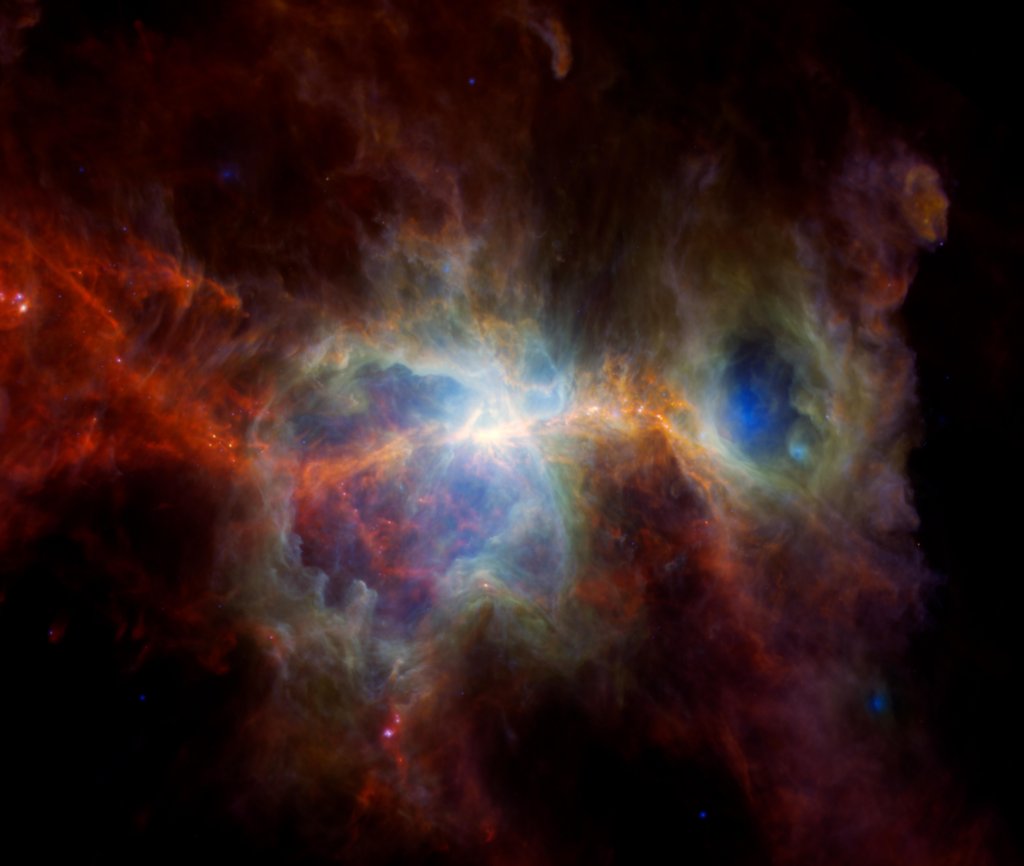 Space telescope images captured in infrared light reveal otherwise unseen details, as in this image of star-forming regions in the Orion Nebula. A recent study that relied on infrared data tracked frequent outbursts from baby stars as they gathered mass from surrounding disks of gas and dust.

The youngest stars often shine in bright bursts as they consume material from surrounding disks.

Outbursts from stellar babies at the earliest stage of development – when they’re about 100,000 years old, or the equivalent of a 7-hour-old infant – occur roughly every 400 years, the analysis found. These eruptions of luminosity are signs of feeding binges as the young, growing stars devour material from the disks of gas and dust that surround them.

Megeath is a co-author of the study, which was published earlier this year in the Astrophysical Journal Letters and led by Wafa Zakri, a professor at Jazan University in Saudi Arabia. It represents a major step forward in understanding stars’ formative years. Until now the formation and early development of the very youngest stars have been challenging to study, since they’re mostly hidden from view inside the clouds from which they form.

Swaddled in thick envelopes of gas, these young stars – less than 100,000 years old, known as “class 0 protostars” – and their outbursts are especially difficult to observe using ground-based telescopes. The first such outburst was detected nearly a century ago, and they’ve rarely been seen since.

But Spitzer, which ended its 16-year run of observations from orbit in 2020, viewed the universe in the infrared, beyond what human eyes can see. That, and its long-lasting gaze, allowed Spitzer to see through gas and dust clouds and pick up bright flares from the stars nestled inside.

The study team searched Spitzer data for protostar outbursts between 2004 and 2017 in the star-forming clouds of the Orion constellation – a long-enough “stare” to catch baby stars in the act of making an outburst. Among 92 known class 0 protostars, they found three – with two of those outbursts previously unknown. The data revealed likely burst rate for the youngest baby stars of roughly every 400 years, much more frequent than the rate measured from the 227 older protostars in Orion.

They also compared the Spitzer data with that from other telescopes, including the space-based Wide-field Infrared Survey Explorer (WISE), the now-retired ESA (European Space Agency) Herschel Space Telescope, and the now-retired airborne Stratospheric Observatory for Infrared Astronomy (SOFIA). That allowed them to estimate that the bursts typically last about 15 years. Half or more of a baby star’s bulk is added during the early class 0 period.

“By cosmic standards, stars grow rapidly when they are very young,” Megeath said. “It makes sense that these young stars have the most frequent bursts.”

The new findings will help astronomers better understand how stars form and accumulate mass, and how these early bouts of mass consumption might affect the later formation of planets.

“The disks around them are all raw material for planet formation,” he said. “Bursts can actually influence that material,” perhaps triggering the appearance of molecules, grains, and crystals that can stick together to form larger structures.

It’s even possible that our own Sun once was one of these burping babies.

“The Sun is a bit bigger than most stars, but there’s no reason to think that it didn’t undergo bursts,” Megeath said. “It probably did. When we witness the process of star formation, it is a window into what our own solar system was doing 4.6 billion years ago.”

The entire body of scientific data collected by the Spitzer Space Telescope during its lifetime is available to the public via the Spitzer data archive, housed at the Infrared Science Archive at IPAC at Caltech in Pasadena, California. NASA’s Jet Propulsion Laboratory, a division of Caltech, managed Spitzer mission operations for the agency’s Science Mission Directorate in Washington. Science operations were conducted at the Spitzer Science Center at IPAC at Caltech. Spacecraft operations were based at Lockheed Martin Space in Littleton, Colorado.