At Saturn, One of These Rings is not like the Others 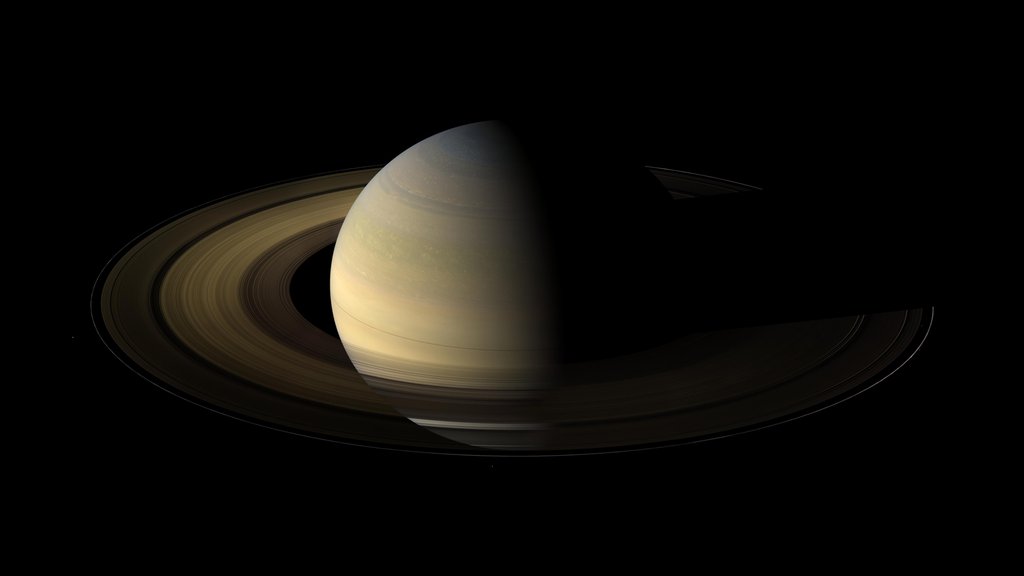 Cassini's view of Saturn during its 2009 equinox shows both the northern and southern hemispheres equally sunlit, with the north pole half in shadow.› Full image and caption
Credit: NASA/JPL/Space Science Institute

One section of Saturn's rings may be loaded with chunks of solid ice, possibly shards from a destroyed moon, according to a new study by Cassini scientists.

› A study suggests the particles in one section of Saturn's rings are denser than elsewhere, possibly due to solid, icy cores.

› The findings could mean that particular ring is much younger than the rest.

When the sun set on Saturn's rings in August 2009, scientists on NASA's Cassini mission were watching closely. It was the equinox -- one of two times in the Saturnian year when the sun illuminates the planet's enormous ring system edge-on. The event provided an extraordinary opportunity for the orbiting Cassini spacecraft to observe short-lived changes in the rings that reveal details about their nature.

Like Earth, Saturn is tilted on its axis. Over the course of its 29-year-long orbit, the sun's rays move from north to south over the planet and its rings, and back again. The changing sunlight causes the temperature of the rings -- which are made of trillions of icy particles -- to vary from season to season. During equinox, which lasted only a few days, unusual shadows and wavy structures appeared and, as they sat in twilight for this brief period, the rings began to cool.

In a recent study published in the journal Icarus, a team of Cassini scientists reported that one section of the rings appears to have been running a slight fever during equinox. The higher-than-expected temperature provided a unique window into the interior structure of ring particles not usually available to scientists.

"For the most part, we can't learn much about what Saturn's ring particles are like deeper than 1 millimeter below the surface. But the fact that one part of the rings didn't cool as expected allowed us to model what they might be like on the inside," said Ryuji Morishima of NASA's Jet Propulsion Laboratory, Pasadena, California, who led the study.

The researchers examined data collected by Cassini's Composite Infrared Spectrometer during the year around equinox. The instrument essentially took the rings' temperature as they cooled. The scientists then compared the temperature data with computer models that attempt to describe the properties of ring particles on an individual scale.

What they found was puzzling. For most of the giant expanse of Saturn's rings, the models correctly predicted how the rings cooled as they fell into darkness. But one large section -- the outermost of the large, main rings, called the A ring -- was much warmer than the models predicted. The temperature spike was especially prominent in the middle of the A ring.

To address this curiosity, Morishima and colleagues performed a detailed investigation of how ring particles with different structures would warm up and cool down during Saturn's seasons. Previous studies based on Cassini data have shown Saturn's icy ring particles are fluffy on the outside, like fresh snow. This outer material, called regolith, is created over time, as tiny impacts pulverize the surface of each particle. The team's analysis suggested the best explanation for the A ring's equinox temperatures was for the ring to be composed largely of particles roughly 3 feet (1 meter) wide made of mostly solid ice, with only a thin coating of regolith.

"A high concentration of dense, solid ice chunks in this one region of Saturn's rings is unexpected," said Morishima. "Ring particles usually spread out and become evenly distributed on a timescale of about 100 million years."

The accumulation of dense ring particles in one place suggests that some process either placed the particles there in the recent geologic past or the particles are somehow being confined there. The researchers suggest a couple of possibilities to explain how this aggregation came to be. A moon may have existed at that location within the past hundred million years or so and was destroyed, perhaps by a giant impact. If so, debris from the breakup might not have had time to diffuse evenly throughout the ring. Alternatively, they posit that small, rubble-pile moonlets could be transporting the dense, icy particles as they migrate within the ring. The moonlets could disperse the icy chunks in the middle A ring as they break up there under the gravitational influence of Saturn and its larger moons.

"This particular result is fascinating because it suggests that the middle of Saturn's A ring may be much younger than the rest of the rings," said Linda Spilker, Cassini project scientist at JPL and a co-author of the study. "Other parts of the rings may be as old as Saturn itself."

During its final series of close orbits to Saturn, Cassini will directly measure the mass of the planet's main rings for the first time, using gravity science. Scientists will use the mass of the rings to place constraints on their age.