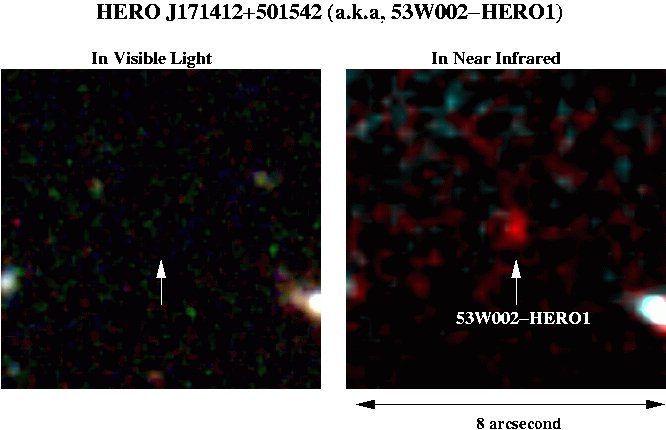 Heroes are usually confined to comic books and movies, but as the saying goes, we all need one. So astronomers have turned to the deep, dark cosmos to find their heroic figure -- the "Hyper Extremely Red Object," or "Hero."

Heroes are usually confined to comic books and movies, but as the saying goes, we all need one. So astronomers have turned to the deep, dark cosmos to find their heroic figure -- the "Hyper Extremely Red Object," or "Hero."

At the American Astronomical Society winter meeting in Seattle today, an astronomer from the California Institute of Technology in Pasadena reports the discovery of a Hero near the radio galaxy 53W002, more than 10 billion light years away. This marks the first time a Hero has been found near a radio galaxy, suggesting that radio galaxies -- which are optically dim but have strong radio emissions -- may provide a guidepost for scouting out other Hero objects.

"Hero objects are intriguing. Like comic book heroes, they travel really fast -- almost at the speed of light. They are virtually invisible to our eyes and they are very mysterious. Most importantly, this type of Hero may hold a key for understanding how the first galaxies formed and evolved in the universe," said Dr. Myungshin Im, a staff research scientist at the Space Infrared Telescope Facility Science Center, located at Caltech.

So far, the astronomical version of a hero has taken on the unassuming guise of a small, glowing, red patch in deep space. More advanced infrared telescopes like NASA's Space Infrared Telescope Facility, managed by the Jet Propulsion Laboratory, Pasadena, Calif., and launching in spring 2003, may, among other things, lift this red veil and reveal these remote objects for what they really are -- quite possibly the universe's earliest stars and galaxies.

Due to expansion of the universe after the Big Bang, a distant object in the universe races away from us so fast that any visible light from it "redshifts" -- in other words, a light source becomes redder when it recedes from observers on Earth, and, conversely, bluer when it approaches. So when a visible light source moves away from us at nearly the speed of light, it often appears in infrared wavelengths. Big Bang theory also implies that the farther away an object is, the faster it moves away from us.

53W002_HERO1, the designation for the newly found Hero, is so far away and moves so fast it appears as a faint infrared source. In fact, it took two powerful telescopes equipped with infrared cameras to spot it in the deep sky. Im discovered 53W002_HERO1 from images taken by the near-infrared camera and multi-object spectrometer on NASA's Hubble Space Telescope and the cooled infrared spectrograph and camera attached to the Subaru 8-meter (26-feet) telescope atop Mauna Kea in Hawaii. Dr. Toru Yamada and collaborators at the National Astronomical Observatory of Japan provided Im with the Subaru data.

The more distant a cosmic object is, the further in the past we see it. But for Im and colleagues to glean information about the early universe from 53W002_HERO1, they first need to determine its intrinsic color -- that is, how would this astronomical hero appear to a human observer nearby?

It could be red, indicating either dust-obscured galaxies cocooning intense star formation, or older galaxies filled with an overabundance of elderly, reddish stars, both of which would lie about 10 billion light-years away. If the former condition exists, astronomers will appreciate the degree to which dust hid star formation during that epoch. However, if the latter holds then scientists can trace back to a time when a significant population of stars were born.

Another possibility is that a Hero might really be blue -- a very young galaxy populated with fresh, super-hot blue stars at a distant 13 to 14 billion light years. In this instance, we may be witnessing the formation of the universe's very first galaxies.

To determine whether 53W002_HERO1 is intrinsically red or blue, Im and his colleagues will peer at these mysterious objects in the redder part of infrared, a feat that requires a view from above Earth's infrared-absorbing atmosphere. This will be accomplished with the Space Infrared Telescope Facility.

More information on the Space Infrared Telescope Facility is available at http://sirtf.caltech.edu. The Jet Propulsion Laboratory is a division of Caltech.