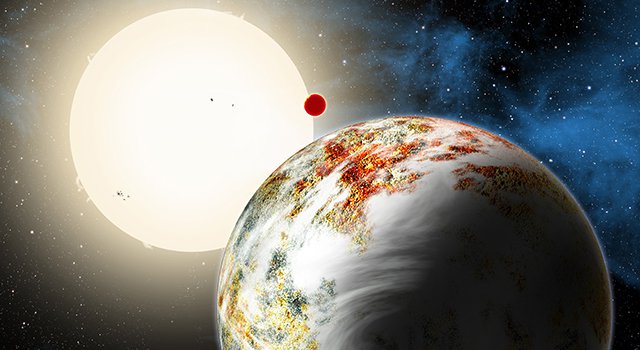 An artist's conception shows the Kepler-10 system, home to two rocky planets. In the foreground is Kepler-10c, a planet that weighs 17 times as much as Earth and is more than twice as large in size. Planet formation theorists are challenged to explain how such a massive world could have formed.› Full image and caption
Credit: Harvard-Smithsonian Center for Astrophysics/David Aguilar

A planet thought to be rocky and 17 times as massive as Earth has theorists scratching their heads.

Astronomers have discovered a rocky planet that weighs 17 times as much as Earth and is more than twice as large in size. This discovery has planet formation theorists challenged to explain how such a world could have formed.

"We were very surprised when we realized what we had found," said astronomer Xavier Dumusque of the Harvard-Smithsonian Center for Astrophysics, Cambridge, Massachusetts, who led the analysis using data originally collected by NASA's Kepler space telescope.

Kepler-10c, as the planet had been named, had a previously measured size of 2.3 times larger than Earth, but its mass was not known until now. The team used the HARPS-North instrument on the Telescopio Nazionale Galileo in the Canary Islands to conduct follow-up observations to obtain a mass measurement of the rocky behemoth.

It was thought worlds such as this could not possibly exist. The enormous gravitational force of such a massive body would accrete a gas envelope during formation, ballooning the planet to a gas giant the size of Neptune or even Jupiter. However, this planet is thought to be solid, composed primarily of rock.

"Just when you think you've got it all figured out, nature gives you a huge surprise -- in this case, literally," said Natalie Batalha, Kepler mission scientist at NASA's Ames Research Center in Moffett Field, California. "Isn't science marvelous?"

Kepler-10c orbits a sun-like star every 45 days, making it too hot to sustain life as we know it. It is located about 560 light-years from Earth in the constellation Draco. The system also hosts Kepler-10b, the first rocky planet discovered in the Kepler data.

The finding was presented today at a meeting of the American Astronomical Society in Boston. Read more about the discovery in the Harvard-Smithsonian Center for Astrophysics news release.

Ball Aerospace and Technologies Corp. in Boulder, Colorado, developed the Kepler flight system and supports mission operations with the Laboratory for Atmospheric and Space Physics at the University of Colorado in Boulder.