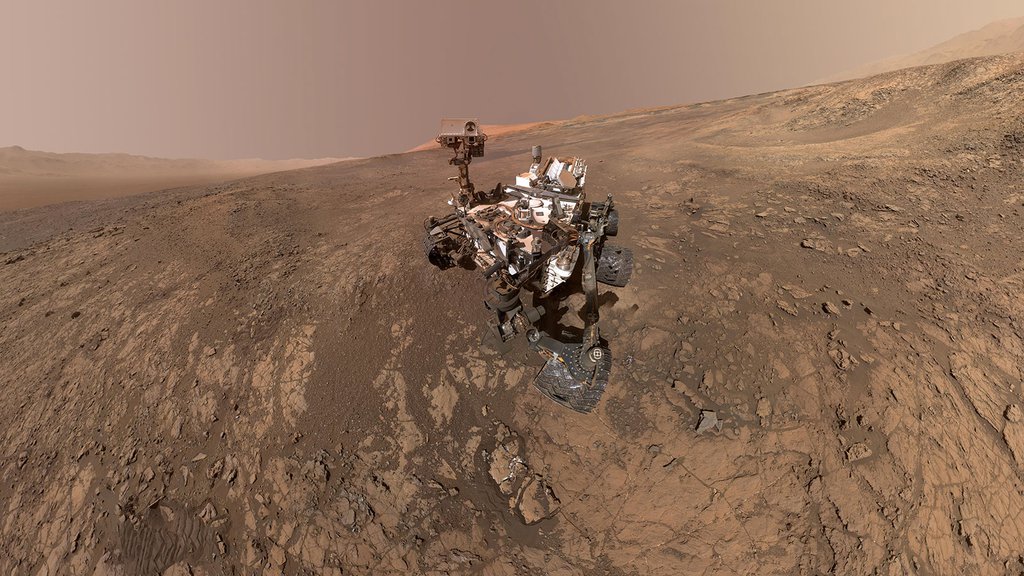 Data from NASA's Curiosity Mars rover were used in a new paper studying how asteroids impacting the ancient Martian atmosphere could have produced key ingredients to life. Those data were provided by Curiosity's Sample Analysis at Mars instrument.› Full image and caption
Credit: NASA/JPL-Caltech/MSSS 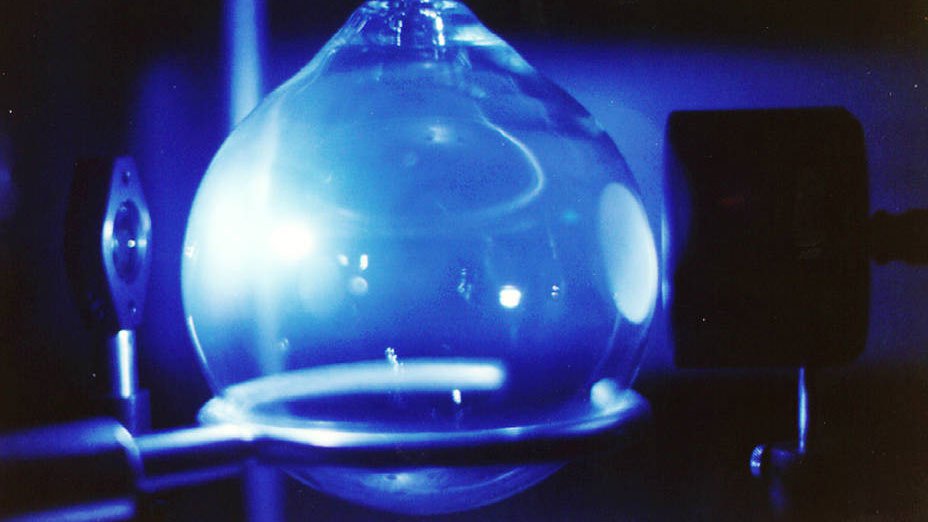 This flask served as part of a laboratory test simulating the effect of asteroids impacting the ancient Martian atmosphere. A high-intensity infrared laser is focused into the flask from a lens (left) to simulate the high-energy shockwaves produced by asteroids entering the Martian atmosphere. The gas is then evacuated from the flask and analyzed to determine the composition and levels of nitrogen fixation.
Credit: Rafael Navarro-González

A new study reveals asteroid impacts on ancient Mars could have produced key ingredients for life if the Martian atmosphere was rich in hydrogen. An early hydrogen-rich atmosphere on Mars could also explain how the planet remained habitable after its atmosphere thinned. The study used data from NASA's Curiosity rover on Mars and was conducted by researchers on Curiosity's Sample Analysis at Mars (SAM) instrument team and international colleagues.

These key ingredients are nitrites (NO2) and nitrates (NO3), fixed forms of nitrogen that are important for the establishment and sustainability of life as we know it. Curiosity discovered them in soil and rock samples it took as it traversed within Gale Crater, the site of ancient lakes and groundwater systems on Mars.

To understand how fixed nitrogen may have been deposited in the crater, researchers needed to recreate the early Martian atmosphere here on Earth. The study, led by Dr. Rafael Navarro-González and his team of scientists at the Institute of Nuclear Sciences of the National Autonomous University of Mexico in Mexico City, used a combination of theoretical models and experimental data to investigate the role hydrogen plays in altering nitrogen into nitrites and nitrates using energy from asteroid impacts. The paper was published in January in the Journal of Geophysical Research: Planets.

In the lab, the group used infrared laser beam pulses to simulate the high-energy shockwaves created by asteroids slamming into the atmosphere. The pulses were focused into a flask containing mixtures of hydrogen, nitrogen and carbon dioxide gases, representing the early Martian atmosphere. After the laser blasts, the resulting concoction was analyzed to determine the amount of nitrates formed. The results were surprising, to say the least.

"The big surprise was that the yield of nitrate increased when hydrogen was included in the laser-shocked experiments that simulated asteroid impacts," said Navarro-González. "This was counterintuitive as hydrogen leads to an oxygen-deficient environment while the formation of nitrate requires oxygen. However, the presence of hydrogen led to a faster cooling of the shock-heated gas, trapping nitric oxide, the precursor of nitrate, at elevated temperatures where its yield was higher."

Although these experiments were conducted in a controlled lab environment millions of miles from the Red Planet, the researchers wanted to simulate the results obtained from Curiosity using the SAM instrument on the rover. SAM takes samples drilled from rock or scooped up from the surface by the rover's mechanical arm and bakes them to look at the chemical fingerprints of the released gases.

"SAM on Curiosity was the first instrument to detect nitrate on Mars," said Christopher McKay, a co-author of the paper at NASA's Ames Research Center in California's Silicon Valley. "Because of the low levels of nitrogen gas in the atmosphere, nitrate is the only biologically useful form of nitrogen on Mars. Thus, its presence in the soil is of major astrobiological significance. This paper helps us understand the possible sources of that nitrate."

Why were the effects of hydrogen so fascinating? Although the surface of Mars is cold and inhospitable today, scientists think that a thicker atmosphere enriched in greenhouse gases such as carbon dioxide and water vapor may have warmed the planet in the past. Some climate models show that the addition of hydrogen in the atmosphere may have been necessary to raise temperatures enough to have liquid water at the surface.

"Having more hydrogen as a greenhouse gas in the atmosphere is interesting both for the sake of the climate history of Mars and for habitability," said Jennifer Stern, a planetary geochemist at NASA's Goddard Space Flight Center in Greenbelt, Maryland, and one of the co-investigators of the study. "If you have a link between two things that are good for habitability - a potentially warmer climate with liquid water on the surface and an increase in the production of nitrates, which are necessary for life - it's very exciting. The results of this study suggest that these two things, which are important for life, fit together and one enhances the presence of the other."

Even though the composition of the early Martian atmosphere remains a mystery, these results may provide more pieces for solving this climate puzzle.

NASA is exploring our solar system and beyond, uncovering worlds, stars and cosmic mysteries near and far with our powerful fleet of space and ground-based missions. Experimental and theoretical work by Navarro-González was funded by the National Autonomous University of Mexico in Mexico City and the National Council of Science and Technology of Mexico. American co-authors received funding from NASA's Mars Science Laboratory project and French co-authors received funding from the National Center for Space Studies (CNES), Paris, France. NASA's Mars Exploration Program for the agency's Science Mission Directorate (SMD) in Washington funded all work related to the operation of the Curiosity rover, the SAM instrument, and the use of NASA facilities and resources to retrieve and analyze the data. Goddard provided the SAM instrument. NASA's Jet Propulsion Laboratory in Pasadena, California, built the rover and manages the project for SMD.